Although the Sarasota County Commission voted unanimously Sept. 11 to maintain a 10% reduction in building permit fees through Oct. 1, 2013, Commissioner Joe Barbetta balked at the prospect of hiring a consult to undertake a study of the county’s fee schedule.

“I think we could look at best practices,” Barbetta said, as well as what other counties are doing. “I don’t think we need to spend the money for a consultant to project what our fees should be. I just want to be sure we are running a streamlined organization.”

In a memo he had provided to the commissioners prior to the Sept. 11 regular meeting in Venice, Rob Lewis, the county’s director of planning and development services, had pointed out that staff was “in the process of contracting with an outside source [through a state contract] … for a fee study ….”

Lewis told the commissioners on Sept. 11 that he and his staff would be working on the future fee schedule with representatives of the Gulf Coast Builders Exchange, the Home Builders Association Manatee-Sarasota and other members of the community, as well as the county’s Development Services Advisory Committee.

Lewis added that he felt an in-depth assessment of the fee structure by an outside source would be a good idea.

In his Sept. 11 memo, Lewis also noted that in March 2010 and March 2011, the commission had approved the 10% reduction in building permit fees “to further spur economic development.”

Lewis wrote that because of significant reductions in costs over the past four years, “staff feels this continuation of reduction in revenue can be absorbed.”

Barbetta pointed out during the meeting that many permits are handled online, so a reduction greater than 10% might be appropriate.

In response to Barbetta’s comments, Lewis concurred that the fees contribute to an “enterprise” fund; they are fees for services.

Lewis added that the fee reduction already had been incorporated in the county’s 2013 fiscal year budget, which the commission approved on a first reading the previous evening in Venice.

Barbetta made the motion to continue with the reduced fees through Oct. 1, 2013.

Lewis provided the following examples to show how permit fees would be affected by the continuing 10% reduction: 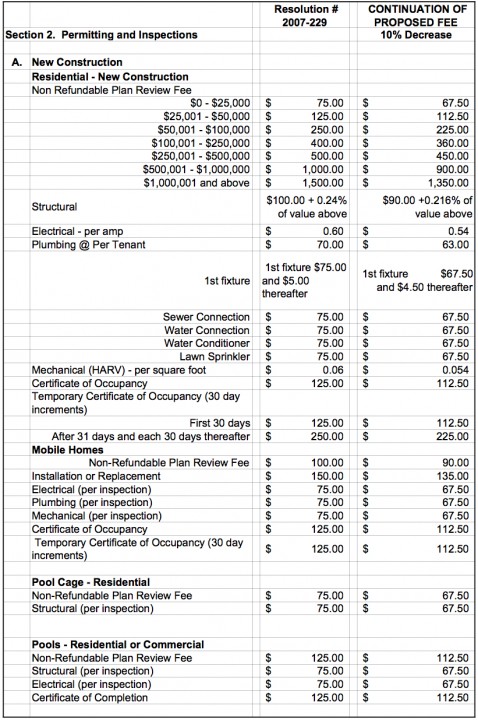