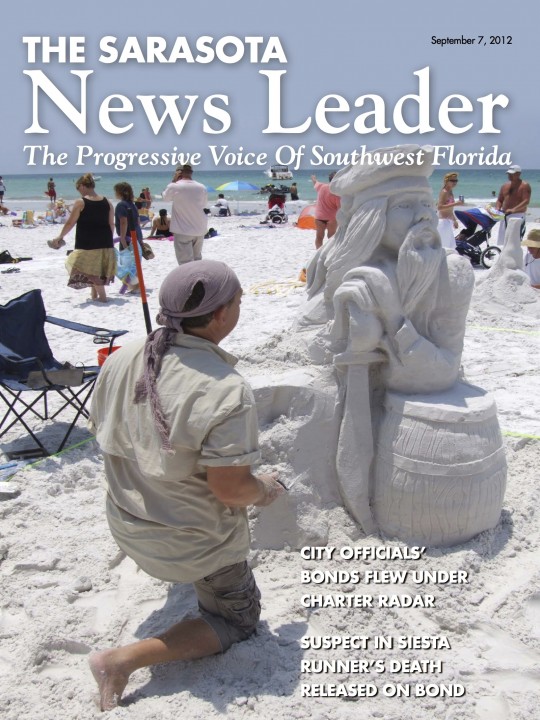 The standalone published version of The Sarasota News Leader will premiere on Friday, Sept. 21, 2012. The cover will look very similar to the production sample above. The full edition, with about 150 pages, will include in-depth news coverage, commentary, features, community calendar and more. It will be readable on tablets such as the iPad and smartphones such as the iPhone. It also will be viewable by using an interactive reader here on our website. If you have not done so already, please subscribe with your email address so that you can be among the first to receive notification for this unique, innovative publication.

Sarasota has three pension funds. One is for general employees, another for police and a third for city firefighters from 1996 and earlier, before the city and county fire departments merged. All three pension funds are in trouble. (Full story here)

The City of Sarasota’s Public Art Committee is going under a political microscope to determine whether it lives or dies. The last item on the Sept. 4 City Commission agenda was a settlement of a lawsuit brought by the current chairman of the committee. (Full story here)

Siesta Key business owners not giving up on
permanent No. 1 beach signs

They won’t take “No” for an answer. Siesta Village business owners are determined to find some way to maintain permanent signage about Siesta Public Beach’s No. 1 ranking in 2011 on Dr. Stephen P. Leatherman’s list of the top U.S. beaches. (Full story here)

A co-chairwoman of the 2012 Siesta Key Crystal Classic Master Sandsculpting Competition had good news this week for Siesta Village businesses. Plans call for buses transporting people to the event to use the north bridge and travel through Siesta Village on their way to Siesta Public Beach, where internationally known sandsculptors will be crafting massive creations out of Siesta’s 99% quartz sand. (Full story here)

The total number of permits Sarasota County staff approved in July for single-family homes was just four higher than July 2011 total, but the value of the construction had more than doubled, according to the August economic report of the county’s Office of Financial Planning. (Full story here)

A Sarasota County Charter amendment that will appear on the Nov. 6 ballot would save taxpayers hundreds of thousands of dollars if approved, the vice chairman of the Charter Review Board indicated in comments to the County Commission on Aug. 21. (Full story here)

Siesta Village businesses are continuing to grapple with the use of fraudulent credit cards, several members reported during the Sept. 4 meeting of the Siesta Key Village Association. “We’ve been dinged a few times,” Keith Cipielewski, co-owner of the Siesta Key Oyster Bar, said in opening the discussion. (Full story here)

The Sarasota County Sheriff’s Office has released surveillance video of two suspects using allegedly stolen credit cards at Macy’s, with the hope the video will help officers identify and catch the thieves. The credit cards reportedly were taken from the trunk of a rental vehicle parked at Siesta Key Beach Access 5 on Aug. 31. (Full story here)

Otus Rufous, an Eastern Screech-Owl, was born on Siesta Key and is a full-time resident there. An avid hunter, accomplished vocalist and genuine night owl, Otus is a keen observer of our local wildlife and knows many of nature’s secrets. Otus will answer your questions about our amazing wildlife, but only if you Ask Otus. (Full story here)

Wonder what became of the proposal for a pocket park on that 1-acre vacant lot facing the Gulf of Mexico just north of Siesta Village? Christine P. Johnson, president of the Conservation Foundation of the Gulf Coast, told me the foundation never gained enough support for the project to pursue it. Residents of the adjacent Windward Passage condominium complex protested the proposal mightily during both a Siesta Key Association meeting and a Siesta Key Village Association meeting early this year, but other residents thought the site would be a great place for a park. (Full story here)