How ugly will this get? A white journalist weeps for a black bureaucrat. His black publisher says, “The whole thing boils down to a high-tech lynching.” (Read full story here)

After some last-minute give-and-take Aug. 2, the Sarasota City commissioners offered a contract to Tom Barwin, their pick to be the next city manager. All of the terms were as previously reported: $175,000 annual salary, $600 per-month car allowance and $15,000 for moving expenses. (Read full story here)

Can 3,300 registered city voters be wrong? Or is this race-baiting in the making? In a replay of last month’s city-manager hiring question, the city commissioners concluded this latest debate in a decision-less silence. (Read full story here)

Dent drops out of candidates’ forum over dispute
with sponsor

Supervisor of Elections Kathy Dent skipped a supervisor candidates’ forum held Monday evening and broadcast by Sarasota Talk Radio WSRQ because, according to organizers, she disagreed with the inclusion of one of the event sponsors, Sarasota Citizens for Responsible Government. (Read full story here)

Half a quote is worse than none

Almost everyone reading this has, in their lifetime, said, “I love Satan.” At least, that’s what the Republican Party might want us to believe. (Read full story here)

Instead of $6.5 million, Sarasota County is looking at a total of about $3.6 million in disputed state Medicaid billings, the county has announced. The new figure, released by the state’s Agency for Health Care Administration, represents a 44% reduction from the original amount, a news release points out. (Read full story here)

DUI arrests up through May on Siesta Key

Seaweed to be cleaned up on Lido Beach Aug. 2,
with Siesta cleanup to follow

With seaweed continuing to wash up on Sarasota County beaches, county workers are planning to commence cleanup operations on Lido Beach on Thursday, Aug. 2, George Tatge, manager of the county’s Parks and Recreation Department, has notified the county commissioners. (Read full story here)

The Midnight Pass Society and its fellow plaintiffs in a federal lawsuit seeking the reopening of Midnight Pass say they have met their legal burden in alleging a case against Sarasota County. (Read full story here)

A second attempt to install mooring anchors at the bayfront is set to begin on Sept. 1. In anticipation of that, the city has warned boaters in the area to move their vessels from the northern and eastern sections of the mooring field. (Read full story here)

While the Sarasota County School Board is being required by the state to raise its required local millage rate for the 2013 fiscal year, federal government action is going to result in a break for employees on the district’s health-care plan next year. (Read full story here)

Democratic congressional candidate Keith Fitzgerald told reporters on a conference call this afternoon he is “disappointed” that U.S. Rep. Vern Buchanan was a no-show at a deposition scheduled for today, July 30, saying “we’re a nation of laws” and that “it’s incumbent on each of us,” particularly political leaders, “to respect our legal system.” (Read full story here)

The Sarasota Police Department is asking anyone with information about a hit-and-run incident with injury on the north Siesta Bridge early this morning to contact the department at 941-364-7323. (Read full story here)

Just seven days after the primary election, Sarasota County residents will have the opportunity to weigh in on a measure that could be on the general election ballot in November. (Read full story here)

Oriole Bird to lead Walk for the Kids

The Oriole Bird will lead the annual Walk for the Kids in support of the Boys & Girls Clubs of Sarasota County on Sept. 15 at Ed Smith Stadium, the Orioles’ spring training home, the Orioles have announced. (Read full story here)

The playground at Bayfront Park, across from downtown Sarasota, will be closed for repairs Friday, Aug. 3, and Saturday, Aug. 4, the City of Sarasota has announced. (Read full story here)

Sarasota County residents may stay two consecutive nights for the price of one at Turtle Beach Campground on Siesta Key, the county has announced. The buy one, get one free (“BOGO”) special offer runs through Aug. 31, a county news release says, providing local residents the opportunity to enjoy camping on the Gulf of Mexico. (Read full story here)

The Sarasota County Sheriff’s Office has arrested the final suspect in an armed robbery that occurred at the Hibiscus Inn on Stickney Point Road on July 13, the office has announced. (Read full story here)

Orange Avenue drainage work to get under way

The City of Sarasota is scheduled to start work on Saturday, Aug. 4, to improve drainage along North Orange Avenue, from 10th Street to 19th Street. Parts of the avenue will be closed to traffic between October and January. (Read full story here) 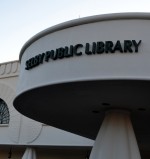 The Sarasota County Library Systemhas been receiving national recognition from the America Library Association’s official publication, “Public Libraries,” for a program that has resulted in increased availability of items in the libraries where they are in demand, a higher potential for personal customer service and decreased cost, Sarasota County Government has announced. (Read full story here)

Guest Column: Travel back in time to a place that holds a special memory. That place might have had a certain look or sound.  Maybe it just made you feel warm, secure and happy. That place for me was my local public library.
To make sure future generations are able to create such memories, I am chairing the new Library Foundation for Sarasota County. (Read full story here)