Petland Sarasota is preparing a strong showing, too, in defense of its business, a spokeswoman tells the News Leader

More than three years ago, in November 2012, Russell Matthes — whose mother, Elise, founded Sarasota in Defense of Animals — stood before the Sarasota County Commission to make the case for an ordinance banning pet sales at retail stores. (Read more »)

Residents to vote on whether to move city elections to November 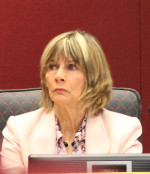 Commissioners voted 3-2, on a first reading, to schedule a referendum, with hope of boosting low voter turnout in the future

The debate resurfaces nearly every two years, after low turnout in the biennial local elections: Does the City of Sarasota need to change the time of year when its residents vote on local issues and City Commission candidates. On Tuesday evening, Jan. 19, in a 3-2 vote, the City Commission moved ahead with plans that would let voters decide the answer. (Read more »)

Almost exactly two months after they voted 3-2 to impose impact fees once again, Sarasota County School Board members this week voiced frustration that the growth management report they commissioned last year seems to have missed the mark on enrollment projections. (Read more »)

In a 4-0 vote on Jan. 20, the Sarasota Planning Board denied an appeal of the city’s issuance of a building permit to the Woman’s Exchange for a loading zone on Rawls Avenue. The Laurel Park Neighborhood Association and three property owners filed the appeal on Nov. 24, 2015. (Read more »)

Residents dealing with about $12 million in damage, with Excelsior Gulf-side staff trying to find accommodations for displaced renters

Based on records going back at least to the 1970s, Siesta Key had not experienced a tornado until Sunday, Jan. 17, National Weather Service (NWS) meteorologist Andrew McKaughan told The Sarasota News Leader this week. He recalled waterspouts, but as far as a tornado: “I don’t see anything,” he said on Jan. 20. (Read more ») 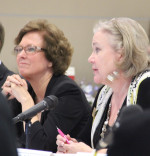 Since 2005, when the Sarasota County School Board began hosting the other elected local government leaders in Sarasota County for an annual Convocation of Governments, the unwritten agenda has called for collegiality and collaboration. (Read more »)

The topics ranged from the Lido Beach Renourishment Project to Benderson Development’s plans for the property it owns at the northwest intersection of Stickney Point Road and U.S. 41 as Sarasota County Commission Chair Al Maio addressed about 70 members of the Siesta Key Condominium Council on Jan. 19 at Siesta Key Chapel. (Read more »)

One Book One Community to kick off MacDonald celebration on Jan. 22

As the One Book One Community program kicks off its celebration of the works of the late, well-known Sarasota author John D. MacDonald on the anniversary of his 100th birthday, the public is invited to join Sarasota County Libraries and Historical Resources Department staff at 6 p.m. on Friday, Jan. 22, at the Selby Public Library in downtown Sarasota. (Read more »)

The Florida Department of Transportation (FDOT) will be reducing Bee Ridge Road from six to four lanes as it works to improve drainage in a four-mile project from Siesta Drive east to Dunn Drive, an FDOT spokesman informed the Sarasota County Commission and county staff this week. (Read more »)

Sarasota County has released the draft of its revised Comprehensive Plan and is inviting the public to “Deep Dives” to learn more about the document, the county has announced. The draft is available on the county website in two volumes. An executive summary also may be found on that site. (Read more »)

FDOT cautioning drivers about Ridgewood Avenue detours, which will start on Jan. 25 in Venice

Crews working on widening of U.S. 41 from four to six lanes

Intermittent closures of Ridgewood Avenue at the intersection of the U.S. 41/Venice By-Pass will begin on Monday, Jan. 25, as crews work on utility and storm drain construction, the Florida Department of Transportation (FDOT) has announced. A temporary detour for local traffic will be in place during the road closure periods, using East Venice Avenue and Bay Indies Boulevard. (Read more »)

Booker High to host ‘Trending Now’ on Jan. 30 to raise funds for contest

The Booker High School Visual and Performing Arts (VPA) Theatre Department will host a gala benefit performance to raise funds to send students to Greensboro, N.C., in March to compete in the Southeastern Theatre Conference (SETC) Festival, the school has announced. (Read more »)

Drive for homeless youth will continue through Jan. 25

For the third year in a row, the Sarasota Police Department is collecting jeans for the Teens for Jeans campaign, the department has announced. The initiative is part of a national campaign in collaboration with Aeropostale stores and www.DoSomething.org. (Read more »)

Sarasota County staff is inviting the public to attend the 2016 Fire Fest on Saturday, Jan. 30, at T. Mabry Carlton Jr. Memorial Reserve, “where attendees will have a chance to see firsthand how prescribed burns protect our communities from wildfire and maintain Florida’s natural ecosystems,” the county has announced. (Read more »)

The Sports Turf Managers Association (STMA) has announced that Ed Smith Stadium, the Spring Training home of the Baltimore Orioles in Sarasota, has won the Field of the Year Award for professional baseball. Dan Thomas, the head groundskeeper of Florida operations for the Orioles, was scheduled to accept the award this week at the 27th annual STMA Conference & Exhibition in San Diego, Calif., an Orioles news release says. (Read more »)

School was among 28,000 applicants from across the country