County program taking the place of new CRAs had its genesis in the Feb. 20 budget workshop this year

Commissioner Christine Robinson won board consensus to research a revival of the Community Reinvestment Program, and a staff presentation followed in May

Sarasota County Commission discussions about reviving a 2006 program to support community redevelopment projects began in public on Feb. 20 of this year, almost exactly seven months before the board formally adopted a resolution signaling the end of the Downtown Sarasota Community Redevelopment Area (CRA). (Click here to continue reading)

With the Florida Department of Transportation (FDOT) having provided three options for creating a permanent right-turn lane from northbound U.S. 41 onto eastbound Fruitville Road, the Sarasota city commissioners are taking some time to observe traffic in the area and weigh how best to proceed. That consensus decision of the board members came after a Sept. 21 presentation by City Engineer Alexandrea DavisShaw. (Click here to continue reading)

The 2016 fiscal year budget for the Sarasota County Sheriff’s Office will add five positions to help overcome reduced support from the state’s underfunded Highway Patrol; new positions in eastern part of the county deferred for now

As he proposed a 2016 fiscal year budget of $100,692,103 to the Sarasota County Commission in late June, Sheriff Tom Knight pointed to the 41-percent drop in the most serious types of crimes over the past seven years — murder, rape, robbery, aggravated assault, burglary, larceny and motor vehicle theft. Over the past year, he noted, his office recorded a 12-percent decline in those offenses. Knight, who took office in January 2009, has credited his intelligence-led policing program with those figures. (Click here to continue reading)

Sarasota County voters to use new machines during 2016 elections

Although Supervisor of Elections Kathy Dent had hoped to hold off until 2017 to replace nine-year-old equipment, maintenance issues necessitate action now, she tells the News Leader

This week, Sarasota County Supervisor of Elections Kathy Dent and her staff began finalizing details for the county’s purchase of new voting equipment that will be in place for the 2016 elections, Dent told The Sarasota News Leader. “We did not want to risk [problems in] an important election year like 2016,” Dent said, referencing past problems in the county and in Florida that led to national headlines. (Click here to continue reading) 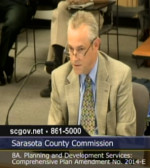 None of the Sarasota County commissioners offered comments on the matter before voting 3-1 on Sept. 22 to reduce the requirement for the number of units to be constructed in the county’s Affordable Housing Overlay from 50 or 60 percent of a development to 15 percent. The airing of their views took place two months ago, when Commissioner Christine Robinson — who cast the lone minority votes on both occasions — questioned a developer’s proposal to build 100 affordable housing units instead of 300 in the Palmer Place project planned east of Interstate 75. (Click here to continue reading)

All families are invited to what organizers promise will be a fun-filled day as Sarasota County Emergency Services holds its annual Fire Prevention Week Open House from 10 a.m. to 2 p.m. Saturday, Oct. 3, at Fire Station No. 5, located at 400 N. Beneva Road in Sarasota. The event is free. This year’s theme, “Hear the beep when you sleep — every bedroom needs a working smoke alarm!” was chosen by the National Fire Prevention Association (NFPA), which reports that one in five home fires and half of home fire deaths occur between 11 p.m. and 7 a.m., when most people are sleeping, a county news release points out. (Click here to continue reading)