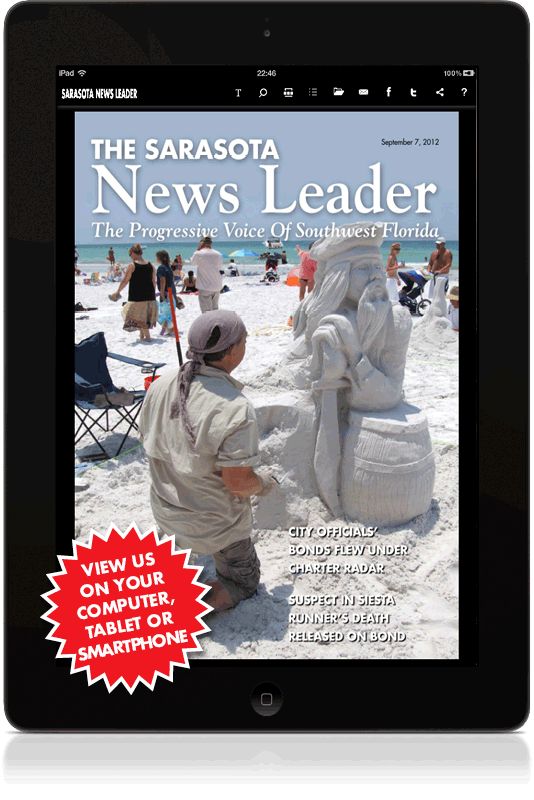 The standalone published version of The Sarasota News Leader will premiere on Friday, Sept. 21, 2012. The cover will look very similar to the production sample above. The full edition, with about 120 pages, will include in-depth news coverage, commentary, features, community calendar and more. It will be readable on tablets such as the iPad and smartphones such as the iPhone. It also will be viewable by using an interactive reader here on our website. If you have not done so already, please subscribe with your email address so that you can be among the first to receive notification for this unique, innovative publication.

Word began spreading across social media late Wednesday, Sept. 19, that, by agreeing to host a Mitt Romney rally Thursday afternoon, The John and Mable Ringling Museum of Art might have violated its own rental policy, which specifically bans all “Fundraising, Political or Revenue Generating activities.” (Full story here)

Search for new police chief down to final five

A pair of foreclosure-defense lawyers scared the willies out of the largest audience the Sarasota County Council of Neighborhood Associations has seen in years. The Monday Sept. 10, forum was billed as “The Foreclosure Mess 101.” (Full story here)

Sarasota city voters will face seven charter amendments on their Nov. 6 ballot. Five have a single purpose, one would divide the City Auditor and Clerk’s Office’s duties and one is a so-called “housekeeping amendment.” (Full story here)

Representatives from the Florida Association of Counties updated the Sarasota County Commission Sept. 12 on its work to unify the 23 gulf counties affected by the 2010 BP oil spill into a consortium that could control Florida’s share of the projected $5 billion to $20 billion that BP will be fined by the federal government. (Full story here)

Siesta stormwater project set to go out for bid
in November

Sarasota County probably will put the Siesta stormwater project out for bid in November, with the bid award expected in February, the project manager told members of the Siesta Key Association during their regular meeting on Sept. 6. However, Curtis Smith said, the site work would not begin until April, after the primary tourist season had ended. (Full story here)

The vote was split on Sept. 12, but the Sarasota County Emergency Services staff received the go-ahead to advertise a request for proposals for a consultant to help staff work out design specifications for a new public safety radio system to replace 16-year-old equipment that could fail soon. (Full story here)

Robinson ‘No’ vote a surprise in an otherwise
scripted budget hearing

“A lot of this activity this evening seems to be somewhat scripted,” Sarasota County Commissioner Jon Thaxton said toward the end of the commission’s first public budget hearing Monday night, Sept. 10. Indeed, it was literally scripted. The budget document the commission was working from contained a “script”from which Commission Chairwoman Christine Robinson and county staffers read. (Full story here)

City’s neighborhood plan to go ‘under the knife’

The Sarasota City Planning Board in the coming months will take a look at parts of the city’s comprehensive plan. Coming up Wednesday, Sept. 19, the Neighborhood Chapter will be under review. (Full story here)

In A Hitchhiker’s Guide to the Galaxy, an alien tour book author prepared to write a chapter on Earth. As he looked down from orbit, he mistakenly decided the automobile was the planet’s primary form of life. He renamed himself Ford Prefect so he would blend in. (Full story here)

Voicing frustration that she never had received documentation she had requested in June from the Arts and Cultural Alliance of Sarasota County, the chairwoman of the County Commission this week proposed changes to the county’s contract with the alliance for Fiscal Year 2013, to prevent a similar situation in the future. (Full story here)

Upon advice of County Attorney Stephen DeMarsh, the Sarasota County Commission this week voted unanimously to settle the lawsuit it had filed against the state over efforts to collect disputed Medicaid payments. (Full story here)

A gap of almost $131,000 exists between expenses Sarasota County has documented for its upkeep of Siesta Village over the past year and the total amount of special assessments the property owners in the Village Public Improvement District paid for this fiscal year, according to county records. (Full story here)

The Jewel fills a gap in downtown Sarasota

“Out with the old and in with the new” would be an odd motto for a historic preservation board. But two buildings in Sarasota’s downtown historic district will be coming down by early next year to make way for another bayfront condominium. (Full story here)

The Sarasota County Commission will hold a public hearing on Sept. 25 to determine whether the sunset dates for the county’s Noise and Air and Sound Pollution ordinances should be extended for one year, to Nov. 18, 2013. (Full story here)

Although the Sarasota County Commission voted unanimously Sept. 11 to maintain a 10% reduction in building permit fees through Oct. 1, 2013, Commissioner Joe Barbetta balked at the prospect of hiring a consult to undertake a study of the county’s fee schedule. (Full story here)

On Sept. 11, during a ceremony under much sunnier skies than they saw during the July groundbreaking, members of Salt of the Earth USA, officials of the City of Venice, first responders in the community and residents dedicated a beam from one of the World Trade Center towers as a memorial in Patriots Park. (Full story here)

A man whom Sarasota County Sheriff’s Office deputies had arrested in early August in connection with fraudulent credit card use on Siesta Key is facing additional charges, the Sheriff’s Office has reported. (Full story here)

As stated already in several articles by City Editor Stan Zimmerman, including one in this week’s edition, the charter for the City of Sarasota requires that the city manager, the city finance director and the city auditor and clerk be bonded. Those stories also point out that the current city auditor and clerk, Pam Nadalini, has been unable to obtain the required bond since she was appointed to the post in 2010. (Full story here)

Nothing makes people madder than being punished for doing what they know is right — and the law is on their side. When George Haborak, chairman of the city’s Public Art Committee, blew the whistle over what he perceived was a Sunshine Laws violation by an ad hoc committee, little did he think his committee would be penalized and threatened with abolition. (Full story here)

Down and out on Siesta Key

An article in a recent issue of a local weekly reported that a vagrant had been discovered squatting in a building on the north end of Siesta Key. The building, located at 5011 Ocean Blvd., had once been home to thePelican Press. The article fretted that the squatter’s presence might signal an influx of homeless on to the key. (Full story here)

Exquisite. Engrossing. Endearing. They’re called “artist’s books,” but that appellation cannot begin to convey their charm, their wit, their intricacies — or the level of imagination that dwells within their creators. (Full story here)

Otus Rufous, an Eastern Screech-Owl, was born on Siesta Key and is a full-time resident there. An avid hunter, accomplished vocalist and genuine night owl, Otus is a keen observer of our local wildlife and knows many of nature’s secrets. Otus will answer your questions about our amazing wildlife, but only if you Ask Otus. (Full story here)

Blessed be they, large and small

The annual Blessing of the Animals will take place on Sunday, Sept. 30, at 4 p.m., in downtown Sarasota at the Church of the Redeemer, 222 S. Palm Ave., the church has announced. The service will be held on the front lawn of the church (facing the Gulfstream cul-de-sac). (Full story here)