On Sept. 11, during a ceremony under much sunnier skies than they saw during the July groundbreaking, members of Salt of the Earth USA, officials of the City of Venice, first responders in the community and residents dedicated a beam from one of the World Trade Center towers as a memorial in Patriots Park.

The beam was delivered to Salt of the Earth members exactly a year earlier, President and CEO E.F. “Gene” Sweeney, pointed out during remarks to the Sarasota County Commission later that day.

Sweeney says he wants to make sure Sarasota is known forever for its role in the events that unfolded on Sept. 11, 2011. Not only did then-President George W. Bush learn of the terrorist attacks while he was participating in a program at Emma E. Booker Elementary School in Sarasota, but the terrorists who flew the planes that day trained at the Venice Airport. 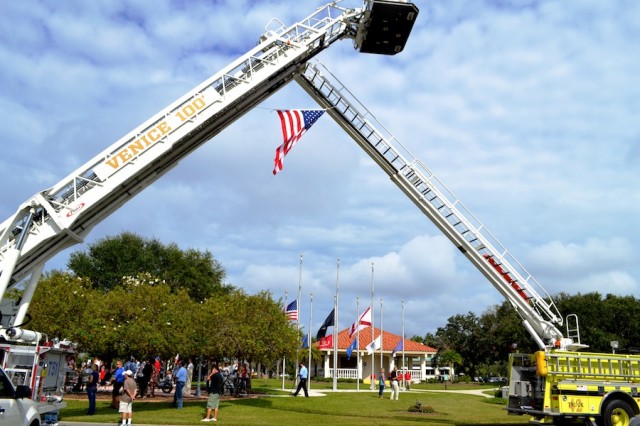 The Gulf Coast Community Foundation in Venice contributed $34,000 kick off the fundraising effort for the construction of the memorial in the park in the city of Venice. Private donations began coming in after the foundation lent its support, Sweeney pointed out to the commissioners.

John Saputo, president and owner of Gold Coast Eagle Distributing of Sarasota, also has been a major supporter, Sweeney said.

A number of names of victims of the war on terror already have been inscribed on the memorial, Sweeney said, including the names of all the Navy SEALs who have died in action since 9/11.

“It’s the beginning,” he said, adding that his goal is to include every name. 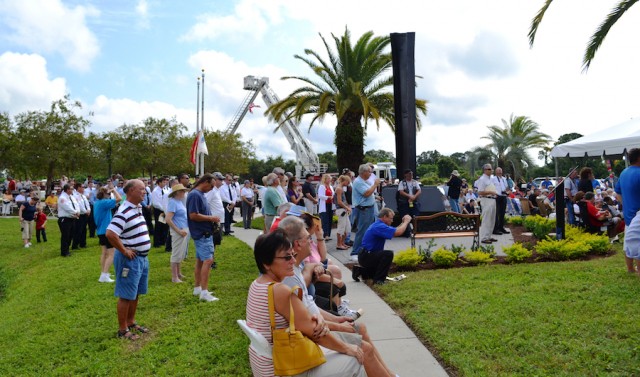 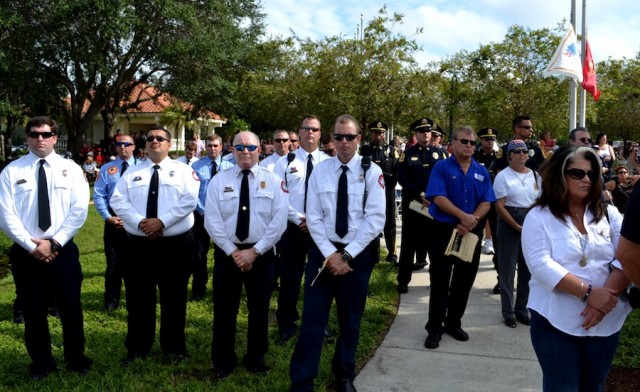 The photo is of the tribute wall to firefighters in the World Trade Center Visitors Center in New York City. The plaque on the frame notes that it is dedicated to all 343 firefighters who lost their lives on Sept. 11, 2001.

“We wanted to salute you,” Robinson told Carvey.

The photo was the last print completed by Barry Becher, a close friend of Schimmel’s, who died in June, she said, adding that she, Schimmel and Becher all were natives of New York State.

Schimmel and Becher have donated quite a few pieces of their artwork to Sarasota County, Robinson said.

Regarding the photo she presented to Carvey, she said, “We hope that you will hang it in one of your fire stations.”

Robinson also surprised Sweeney by presenting him with a smaller copy of the photograph for his efforts to make the 9/11 memorial possible in Venice.

After asking everyone attending the commission meeting to observe a moment of silence in memory of the 9/11 victims, Robinson said, “My thanks to all the firefighters who are here today. … We understand that you risk your lives for us every day.”

For more information about the Patriots Park memorial, people may visit www.saltoftheearthusa.org or call Sweeney at 941-388-8063.