Sheriff’s reasoning for consolidated facilities on Cattleman Road has been cited several times since 2013, and the community’s homelessness consultant has ruled out the location for a shelter

The one-story, mostly windowless commercial building appears to need some minor sprucing up. The back of the property is slightly overgrown. Adjacent to the location of Sarasota County’s first Wawa’s, the pale beige furniture store standing on 1.61 acres at the northwest corner of Butler Avenue and Myrtle Street is perceived very differently at Sarasota City Hall than it is at the Sarasota County Administration Building. Philosophically, it might be said, the vantage points are worlds apart. (Read more »)

Wherever the facility is located, Sheriff Tom Knight says, he is committed to working with its neighbors to make certain they feel safe

Of the three remaining potential sites for a homeless shelter identified in the unincorporated part of Sarasota County, the best in terms of existing resources and location is the home of Bucko’s, an office equipment and furniture store that stands at 1923 Myrtle St. That was the news Wayne Applebee, the county’s director of services to the homeless, delivered to the County Commission during its regular meeting on Nov. 17. (Read more »)

Developer continues to propose a $250,002 contribution to an affordable housing fund

Plans for a townhome project on the edge of Laurel Park moved a step forward this week, after a split Sarasota Planning Board recommended approval of the developer’s request to forgo a zoning stipulation for attainable housing. Oaktree Development, which has a county-owned, 0.8-acre parcel under contract for purchase, wants to build 17 townhomes on the property. But the development team — including nationally known firm David Weekley Homes — has proposed several changes before the project can commence. (Read more »)

In spite of pleas to wait, the County Commission approves funding for new voting machines 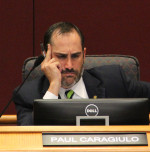 Although five members of the public urged more deliberation, the Sarasota County Commission voted unanimously on Nov. 17 to appropriate $1,650,000 for the purchase of new voting equipment from Election Systems & Software (ES&S), so the machines can be installed and staff and poll workers trained prior to Florida’s March 15, 2016 Presidential Primary. (Read more »)

A pilot program created just four months ago to help address chronic homelessness in the community won plaudits and extra funding from the Sarasota County Commission this week. On a unanimous vote, the board agreed to spend an extra $303,648 from the Housing and Community Development Fund to double the beds provided through the Sheriff’s Housing Initiative Facilitating Transient Service (SHIFTS) program, which began on June 4, according to a county staff memo. (Read more »)

Two Sarasota County commissioners voiced surprise this week that very few, if any, traffic signals have been re-timed since the county began implementing an Advanced Traffic Management System (ATMS) in 2011. The news prompted Commissioner Christine Robinson to make a motion on Nov. 17 calling for staff to compile a full board report on the matter, including the history of the county’s work on the system “and future dates that we expect to see full implementation of ATMS.” (Read more »)

One site will be for a new north Venice facility, while the other would serve students in central Sarasota County, staff members say, though developer donations of land in lieu of impact fee payments could change the plans

The members of the Sarasota County School Board this week gave consensus to a staff recommendation that the purchase of two parcels for new elementary schools be included in the draft of the board’s 2016-17 capital budget, though it is possible one or more developers could opt to provide property in lieu of paying impact fees. That draft also will have to reflect the need for more construction funds for the North Port campus of Suncoast Technical Institute, Kathie Ebaugh, the district’s planning director, told the board during its Nov. 17 workshop in Sarasota. (Read more »)

Based on estimates provided by the University of Florida’s Bureau of Economic and Business Research (BEBR), this is the first year since 2007 that Sarasota County’s population growth has exceeded 1 percent. County Administrator Tom Harmer announced the news in a Nov. 13 email to the county commissioners. (Read more »)

The Sarasota city commissioners opted on Monday, Nov. 16, to wait until Feb. 1, 2016 to decide the fate of a 30-foot strip of property adjacent to Pineapple Park. They heard from proponents of two vastly different options for the city-owned right of way and said they hope to hear more comments from the public before they discuss the topic again next year. (Read more »)

More than a few of the arrows proverbially launched during a County Commission public hearing last week over new concrete picnic shelters for Siesta Public Beach were aimed at the Sarasota County Sheriff’s Office. Lt. Debra Kaspar was on hand during the Nov. 10 session to make sure the commissioners had the facts and to try to ease the frustrations of the speakers who aimed those barbs. (Read more »)

Three ways provided to make payments by end of the day on Nov. 30

Monday, Nov. 30, is the last day to pay property taxes with a 4-percent discount, Sarasota County Tax Collector Barbara Ford-Coates has announced. “This is one of the busiest days of the year,” she said. Customers wishing to pay in person on Nov. 30 may take advantage of the drive-through service available in downtown Sarasota, at the office’s South County location and in Venice from 8:30 a.m. to 5 p.m. (Read more »)

For Siesta Key Crystal Classic competitors, it’s all in the details

Within minutes after the official 10 a.m. opening on Monday, Nov. 16, people were queuing up for the opportunity to gaze at the sculptures comprising the 2015 Siesta Key Crystal Classic Master Sand Sculpting Competition. “Oh, my gosh” and “Amazing” were common refrains as visitors paused in front of the massive works of art begun the preceding Friday and completed on Sunday. (Read more »)

Florida Department of Transportation to hold session on Dec. 15 regarding that design and other Bee Ridge modifications

On Tuesday, Dec. 15, District One staff of the Florida Department of Transportation (FDOT) will hold a public workshop regarding design improvements to Interstate 75 from south of Bee Ridge Road to south of Fruitville Road in Sarasota County, the department has announced. (Read more »)

Sarasota County offices, including recreation centers, to be closed for Thanksgiving

A Booker Middle School English teacher has received the 2015 Beginning Teacher of the Year award from the Florida Council of Teachers of English (FCTE), the Sarasota County Schools have announced. Donna Heath is the third Booker Middle teacher to win the award from the FCTE, a news release says. Joanna Fox and Christopher Pauling were honored in previous years, the release adds. (Read more »)

On Nov. 16, Gregory Carter was chosen chairman of the Sarasota County Public Hospital Board, which governs Sarasota Memorial Health Care System, the board announced. He succeeded Marguerite Malone, who served the previous two years as chair. “Made up of nine citizens elected by Sarasota County voters to four-year terms, the hospital board meets monthly to oversee the hospital’s finances and quality improvement efforts and to set the strategic direction for the system,” a news release explains. (Read more »)