The vote was split on Sept. 12, but the Sarasota County Emergency Services staff received the go-ahead to advertise a request for proposals for a consultant to help staff work out design specifications for a new public safety radio system to replace 16-year-old equipment that could fail soon.

Chairwoman Christine Robinson and Commissioner Joe Barbetta voted against the RFP. Both criticized staff for not checking with public safety personnel in Hillsborough and Pinellas counties, to learn about their replacement of radio equipment before the Republican National Convention was held last month.

Barbetta also argued it was unnecessary to hire a consultant.

After Robert Stuckey, Sarasota County’s general manager of public safety communications told the commissioners the consultant’s services probably would cost between $250,000 and $300,000, Barbetta also criticized the announcement of those figures. People responding to the RFP probably would offer quotes in that range, he pointed out, regardless of what their actual expense might be.

After Stuckey made a presentation to the board about the type of equipment staff and public safety officials felt would work best for the future, Barbetta pointed out that Hillsborough and Pinellas counties had purchased about 2,000 radios of the type proposed. He suggested Stuckey call the director of public safety and communications in Pinellas County to find out details about that project.

“I don’t think we need to take six months and a huge committee to draw an RFP up,” Barbetta added.

Stuckey responded that Sarasota County Emergency Services personnel had been working with their counterparts in Manatee County on a system with parts available from multiple vendors.

“We have a lot of expertise within Sarasota and Manatee counties that we can bring to bear,” Stuckey added. However, he said, the 34 public safety people on the county committee addressing the issue needed a better understanding of the engineering aspects of such a system, “to be sure that [whatever Sarasota County buys] doesn’t go stale in 10 years, 12 years.”

Mike Tobias, the county’s executive director of emergency services and the fire chief, explained that staff was working on a plan to put in place a new system as quickly as possible, but “we also need to make sure that whatever we implement now is adaptable to future technology. That’s where the consultant comes in.”

Tobias added that Sarasota County has “unique needs” for its system that would be different from needs in Hillsborough and Pinellas counties. For example, he said, not only would the Emergency Services and public safety personnel use the new system, but the county’s Public Works staff, the Sarasota County Area Transit staff and the Sarasota County School Board staff also would need to be on the system.

He reminded the commissioners that the county cooperates with the school board to transport special needs residents to shelters. SCAT buses are used for that effort as well, he said.

Moreover, Tobias said, “We’re pretty much a coastal-oriented community,” with certain geographic and demographic features different from those in Hillsborough and Pinellas counties, “and we don’t have the level of expertise, technology-wise, to make an educated and informed decision” on the new radio system.

“We need help from a consultant,” Tobias said, “and I know that’s a dirty word these days, [but] we don’t want to spend good money after bad” trying to patch together systems in the future.

A consultant, Tobias continued, could provide Sarasota and County staff members with information about best practices across the country and around the state “and how we can implement them and tailor them to Sarasota County’s needs.”

“I hear you, and we hear you,” Commissioner Carolyn Mason said, “but how do we do this in a timely manner?”

While it sounded as though the committee working on the project was too large, with 34 members, he added, “These are stakeholders that represent the users of the system. … They’ve been able to narrow down what our needs are and what we can do in-house. [The RFP] is essentially ready to go.”

Tobias also pointed out that the commissioners would have final approval of the consultant’s contract before it was signed.

“You’re not giving us carte blanche to write a blank check,” Tobias said.

“You’re preaching to the choir,” Barbetta said, in regard to the need to replace the current system. However, Barbetta said, “Fifty miles north of us, they just went through this.”

Using an RFP to hire a consultant, he added, “just seems to contradict the speed we need to get the [new] system going.”

“We’re as anxious as anybody to get this moving as fast as we can,” Tobias told Barbetta, “but we also want to be good stewards of the taxpayers’ money.”

Commissioner Nora Patterson told Tobias, “Actually, Chief, you’ve convinced me. None of us like extraneous consultants, and it would be nice if you could just say, ‘Do what Tampa’s done.’ But we’re talking about one of the largest investments and most important investments that the community could make in the next 10 years.”

Further, Patterson said, “We don’t honestly know how to put the money together to pay for [the new system].”

She said that she would like to proceed with authorizing the advertisement of the RFP.

After Patterson made the motion, Commissioner Jon Thaxton seconded it.

“I really think the chief said it best,” Thaxton said of Tobias. “When you have your chief of operations tell you what’s needed, that’s got to weigh pretty heavily on the decision — at least it does for me.”

However, Barbetta reiterated, “I can’t justify the expenditure,” even though Stuckey had pointed out the money for the consultant already was in the 2013 fiscal year budget.

“I want to make sure that we get updates on this,” Mason told Tobias and Stuckey. “I’m going to support this motion,” she said, but requested timely updates on the consulting process.

Robinson said she would not support the motion. “Nobody said we would definitely mirror what was happening in Hillsborough or Pinellas,” she added.

She had requested information about those counties’ recent radio purchase when the Sarasota commission met with the Manatee County Commission during the summer, she pointed out. “That was one of the items I expected to be reported on today. … I can’t understand why it’s not here … I don’t feel like I have all the information to make a good decision today, and that’s not my fault.”

During his presentation, Stuckey offered the following points on the status of the 800MHz system in use in Sarasota County: 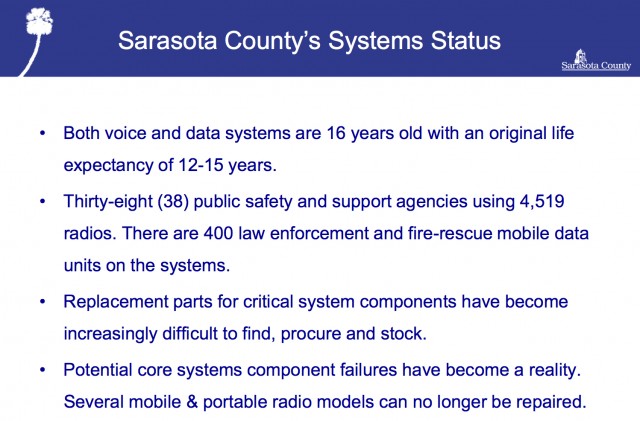