A second attempt to install mooring anchors at the bayfront is set to begin on Sept. 1. In anticipation of that, the city has warned boaters in the area to move their vessels from the northern and eastern sections of the mooring field.

Nearly two years ago, a different company than the one the city recently hired installed mooring anchors that failed stress testing. Acrimony resulted and a lawsuit ensued before the issue was settled.

The September construction is being teamed with recently passed ordinances giving the City of Sarasota broad control over anchoring and mooring in local waters. For example, it is illegal to anchor in a designated mooring area, because boats at anchor have a much larger “swing circle” that boats on a shorter mooring tether.

After the contractor finishes installing 35 moorings, it will be illegal to anchor in any part of the designated mooring field.

The bayfront site is the city’s historic anchorage, although it is open to wind and waves coming through Big Pass to the southwest.

The proposed construction schedule indicates the installation of the mooring anchors will be complete Friday, Sept. 14. A total of 12 moorings will be installed in the eastern (closest to shore) area, with 23 moorings in the northern area fronting Island Park.

A total of 109 moorings are planned for the field, which will be capable of accepting boats ranging from 20 to 100 feet in length.  The moorings will be managed by Marina Jack Inc.

For a detailed look at the city’s mooring field map, see below: 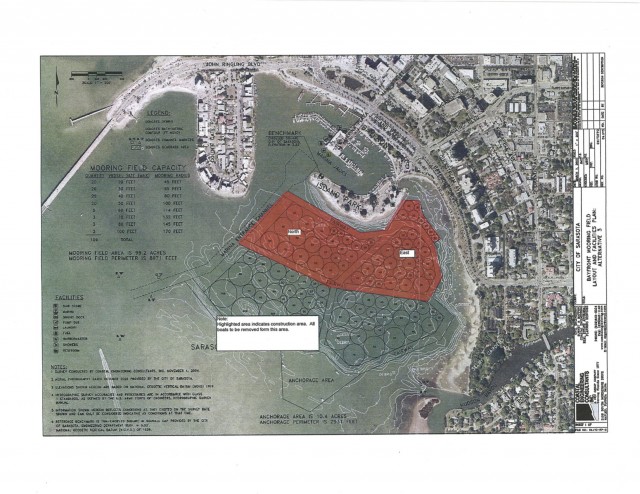