Deputies logged 71 DUI arrests from January through May of this year, compared to 49 for those months in 2011, according to Sheriff’s Office records requested by The Sarasota News Leader.

The figures also reflect a slight increase in the percentage of DUI arrests on Siesta compared to the entire county for the given period, from about 15% in 2011 to approximately 18% in 2012.

For the first three months of the year, DUI arrests in the county were up 18% over the same period for 2011.

For those same three months, the number of visitors to Sarasota County who paid for lodging was up 10.7%, according to statistics presented to the Sarasota County Tourist Development Council in April.

On Siesta Key from January through March this year — the period traditionally considered the height of season — DUI arrests totaled 49 compared to 26 for the same period in 2011, Sheriff’s Office statistics show. That is an increase of about 47%.

Of the five months for which the Sheriff’s Office provided statistics, March 2012 saw the highest number of DUI arrests in the county: 103. May was second, with 88.

However, of the five months in 2012 on Siesta Key, January saw the greatest number of arrests: 18. March was second, with 16.

DUI arrests on the barrier island were in the spotlight early this year, as a countywide debate ensued over whether the consumption of alcoholic beverages should be banned on Siesta’s beaches.

Family members of a runner who was killed on the key Jan. 7 by an allegedly drunken driver pleaded with the Sarasota County Commission in public comments on March 13 to outlaw consumption of alcohol on the beaches. However, the vast majority of email sent to the County Commission following the death of 53-year-old Donna Chen asked that no change be made in the county’s ordinance allowing sales or consumption of alcoholic drinks on the beach.

The last email the County Commission received on the subject was dated March 22, according to a Sarasota News Leader search of email sent to the commissioners.

Exactly a week after that message was sent, Sheriff Tom Knight and other representatives of the Sheriff’s Office met in a regularly scheduled workshop with the County Commission to discuss a wide variety of law enforcement issues.

During the workshop, Maj. Kevin Kenney reported that for all of 2011, the Sheriff’s Office had received a total of 4,652 calls for service on Siesta Key. Out of that total, 257 calls were related to consumption of alcohol, he said. Deputies made 104 DUI arrests, he added, as a result of those calls.

Of the 639 calls for service just at the Siesta Public Beach or the beach accesses in 2011, he said, 83 of the 116 in which criminal charges were filed — 72% — were related to alcoholic-beverage consumption. Kenney added that 88% of those cases were related to underage possession of alcohol.

Regarding the five people arrested for DUI, who were questioned about where they had consumed the alcohol prior to being stopped, Kenney said, “I was only able to locate one that had a definitive location at the beach.”

Finally, Kenney said the county’s Parks and Recreation Department had estimated a total of 2.4 million visitors to the beach in 2011. The rate of alcohol-related criminal charges filed was 0.03 per 1,000 visitors, Kenney said.

Carolyn N. Brown, general manager of parks and recreation, told the News Leader she and her staff would work with the Sheriff’s Office on that idea as final details were ironed out regarding the planned improvements to the beach park.

The County Commission is awaiting final designs and cost estimates from staff before undertaking another discussion on the timeline for making those improvements.

In the meantime, Knight told the County Commission, “My office is committed to arresting drunk drivers.”

For the full Sheriff’s Office report, see below: 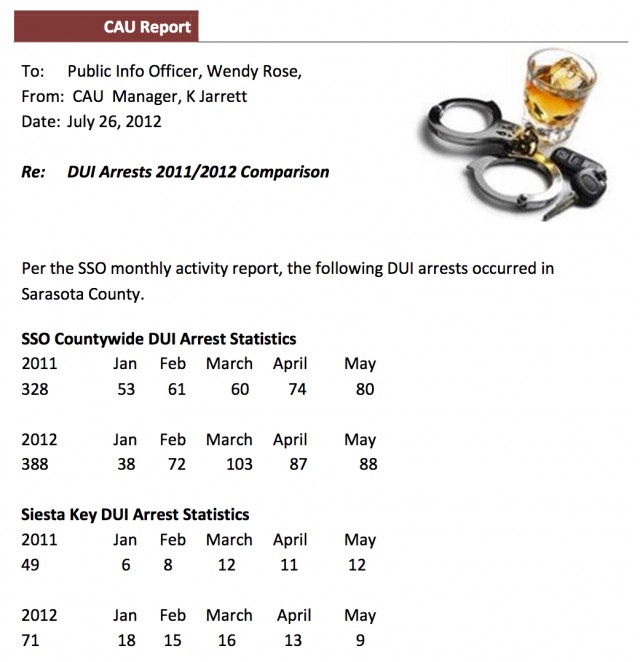