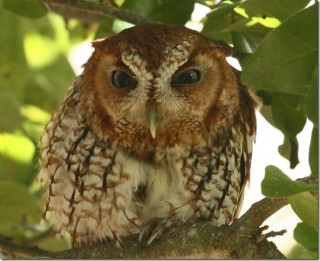 Thanks a lot for the tegu info. We’ve been seeing flocks of Ibises hanging around here lately. What’s the story on them?

I’m pleased you found my answer to your tegu question helpful.

What a delightful photo you’ve taken of the bathing beauties, our native American White Ibis (Eudocimus albus)! It nicely captures their gregariousness, as well as their very distinctive features: that scimitar-curved red beak and those Paul Walker strikingly blue eyes. Another distinguishing feature is their iridescent black-tipped wings, quite noticeable when in flight.

When they are not bathing or preening, you will see them by the water’s edge with their beaks poking in and out of the mud with the regularity of a silent jackhammer. They are a most welcome helper to the organic gardener as they consume insects harmful to decorative garden shrubs while aerating the soil and providing good fertilizer with their poop.

Contrary to popular belief, the ibis do not poach fish from koi ponds — that’s a different culprit, a Great Blue Heron.

Sebastian the Ibis is the official mascot for the University of Miami. His Miami Hurricane football jersey number is ), and all of us Gator fans hope UM’s score will not rise above it!

The White Ibis was a perfect choice for the Hurricanes. Legend has it that its prescience of hurricanes and its bravery in warning all other birds make it the last bird to seek shelter before a hurricane and the first bird to emerge after a hurricane. Now, this would make an ibis a heck of lot smarter than the majority of TV weather forecasters who have yet to learn to come in out of the rain!

Not an ibis in sight!

Now, for the fun part about the ibis: Everyone knows that ibis were  sacred birds of Egypt. Why were they sacred? According to Pliny the Elder, who was probably cribbing and embellishing on Herodotus’ accounts from some five centuries earlier, the ibis saved the Egyptians from an invasion of winged serpents.  The ibis were so successful in eradicating these flying snakes that none has returned to Egypt, or for that matter, ever appeared on Siesta Key!

This same myth may have inspired the Sayeret Maglan (a super-secret Israeli Special Forces unit that operates deep inside enemy territory) to use the ibis as its insignia and name.  “Maglan” is the Hebrew word for “ibis.”

This photo of the Sayeret Maglan insignia (left) is courtesy of Pongo, Tel Aviv, Israel (http://www.pongo.co.il/). Pongo is the leading T-shirt outlet for the macho male, Sabra or not, and just one fun souvenir shop for all.

Again, Rick, thank you for your wonderful photo and question.