Staff research continuing, but County Commission guidance will be needed on scope of potential amendments to existing regulations, report says

Sarasota County staff is researching the legality of imposing a fine as high as $5,000 per violation in cases when people do not abide by the county’s ordinance regarding short-term rentals.

The measure is just one element of a staff report that the County Commission called for on Oct. 9 — at Commissioner Alan Maio’s request. The report notes that Monroe County — home to Key West — already has taken the approach of stiffer fines for illegal rentals.

Released to the board early this month, the report explains that the existing Code Enforcement ordinance covering short-term rentals “provides that a fine shall not exceed $250.00 per day for the first violation and shall not exceed $500.00 per day for a repeat violation.” However, the report points out, Section 162.09 of the Florida Statutes states that the county “can impose a fine not to exceed $5,000 per violation” if the harm resulting from the violation was “irreparable or irreversible in nature.” The report adds, “This may be a likely scenario with illegal short-term rental activity and the associated harm that can be caused by the activity to surrounding property owners during the rental period.”

During remarks to Siesta Key Association (SKA) members over the past months, Director Joe Volpe has talked about numerous suspected illegal rentals in the neighborhood where he and his wife live on the northern part of the island. Among the problems they have witnessed, Volpe has said, have been piles of garbage waiting days for Waste Management pick-ups, drawing pests and producing noxious odors; loud partying late at night; and speeding and significantly more traffic on the residential streets, with multiple people staying in houses close to their home.

He has been working with county Code Enforcement staff on the situation.

After staff has concluded its research, the report continues, it will “bring to the [commission] for consideration a proposed mechanism (e.g. ordinance amendment, fee resolution, etc.) that will provide for increased levels of fines.”

Staff also has suggested the commission could amend the county’s zoning regulations to call for action such as a registration program for short-term rentals and requirements for landlords to provide fire extinguishers, smoke and carbon monoxide detectors, and emergency exits and lighting.

Potential amendments will be one topic on the Dec. 6 SKA agenda, Director Erin Kreis told about 60 members of the organization during the Nov. 8 meeting. A representative of county administration will be present next month, she said, to discuss the issue.

She was speaking for Volpe, Kreis noted, as he was out of town.

The Sarasota News Leader had provided Volpe a copy of the staff report prior to the SKA meeting last week. In an email response, he wrote, “It appears that the commissioners are finally going to address this rental situation.”

“However, the County is constrained in making amendments to the existing regulations,” the report points out, because the county would run the risk of having the state law pre-empt the county law.

As long as amendments do not impose a prohibition on rentals or modify the duration or frequency of rentals, the report indicates the county should have no fear of state recourse.

A bigger problem on Siesta

During remarks on Oct. 9, as part of a regular meeting, Commissioner Maio referenced the emails he and his colleagues had been receiving about short-term rentals. “There seems to be a large concentration of [offenses] … on Siesta Key,” he said.

The report affirms Maio’s observation, noting, “While there are [illegal short-term rental] cases on the mainland, there has been an increase in activity particularly on Siesta Key.”

During the past months, Volpe of the SKA has explained to the nonprofit’s members that the county Zoning Code allows a rental of an accommodation in a single-family residential district only once every 30 days. Nonetheless, given the rise in the popularity of Airbnb and other online services, such as Vacation Rental By Owner (VRBO), more and more property owners in neighborhoods zoned for single-family housing have been taking advantage of tourists’ interest in Siesta Key to market their homes for guests on a much more regular basis.

When the County Commission held its Sept. 12 public hearing on the 2019 fiscal year budget, it heard pleas from property owners, mostly on Siesta Key, who called for a loosening of the zoning regulations so they could generate more income from their houses.

Lisa McBride, a Realtor with Keller Williams on the Water in Sarasota, talked of clients interested in living on the island only a few weeks a year, but declining to purchase property if they could not rent it more often than once every 30 days.

Possible new procedures and the costs

In regard to other amendments of the Sarasota County zoning regulations, the staff report explains that the Cities of Holmes Beach and Anna Maria Island have adopted provisions that include guidelines regarding inspections of rental properties, parking and solid waste collection.

“Should the [Sarasota County Commission] determine that an ordinance amendment is needed,” the report adds, “the Board would need to provide guidance on the scope of such an amendment. Staff would then move forward with the … process and provide the Board with analysis and proposed language for consideration.” 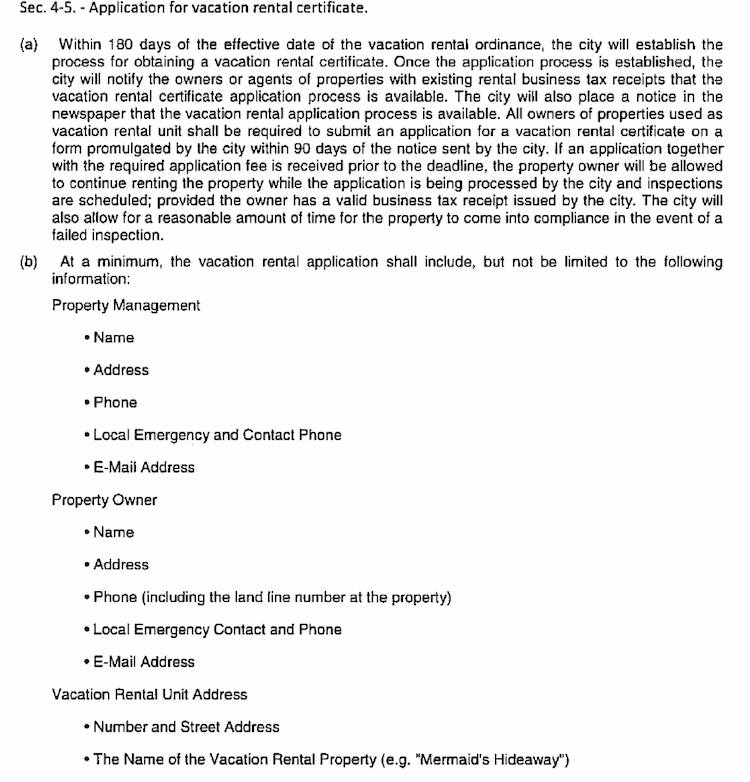 That part of the report does include a caveat: “Note that adding … regulatory provisions relating to short-term rentals would [necessitate consideration of] staffing resources and funding … to administer the regulations.”

The county staff report explains that the Code Enforcement Division, which enforces the short-term rental zoning regulations, “is funded by the General Fund.” That account is made up primarily of property tax revenue. Although it is the most flexible source of the County Commission’s numerous “pots” of money from which to finance initiatives, commissioners and finance staff have explained, it also is the most constrained, because of the demands upon it.

The county has 11 Code Enforcement officers, the report points out: one for each zone in the county, “where they are the primary staffing resource.” (The report does point out that Building Division staff handles unlicensed contracting activity and Florida Building Code violations.)

“Each Code Enforcement Officer is responsible for a variety of County Code issues,” the memo adds: improper outdoor storage, illegal signage, overgrowth and yard debris, and derelict/untagged vehicles, among them.

Even with the increase in illegal short-term rental activity on Siesta Key, the report says, the island has only one Code Enforcement officer assigned to the island. SKA Director Volpe has presented that officer, Susan Stahley, to members during meetings.

“In addition to normal working hours (Monday through Friday [from 8 a.m. to 5 p.m.]), Code Enforcement staff has utilized overtime funding to conduct [after-hours] and weekend inspections to investigate illegal short-term rentals as well as other alleged violations,” the staff report continues.

In the budget the commission approved for the 2019 fiscal year — which began on Oct. 1 — $45,384 “has been allocated to overtime efforts,” the report points out.

Staff has experienced challenges in dealing with the short-term rental cases, the report notes, a fact Stahley also has explained to SKA members.

One issue with which staff has dealt, the report says, is the need to prove that renters in suspected cases are not friends or family members of the owner of a house. “Another challenge is that advertisements will show daily costs to rent and include a statement saying that [owners] can rent only once in a 30-day period, even though it is suspected [the owners] are renting multiple times within a month.”

As demonstrated by a recent 12th Judicial Circuit Court case, the report continues, staff’s evidence, showing attempts to book a rental several times within a month, was quashed. The court cited the fact that no money was exchanged. As a result, the report added, staff is exploring the possibility of completing rental transactions, “which could then serve as more effective evidence.”
The report does note “that staff has succeeded in court in other instances,” when it was able to obtain “accurate records reflecting multiple rentals in a 30-day period and bringing forward advertisements that met the violation criteria [in the County Code].”

Among such records, the report notes, are receipts and checks showing money has changed hands; testimony of witnesses who have rented properties in situations in violation of the County Code; and copies of lease agreements that violate the code.

Volpe also has asked SKA members for help in identifying on the Airbnb and other accommodations websites the houses where they suspect illegal short-term rentals are taking place. Addresses typically are not shown next to rental properties on those websites, but photos and other information are included that can assist in the identifications if people are familiar with the properties.

The staff report does note, too, “that Code Enforcement staff has gained voluntary compliance on a number of occasions because of continued investigations and educational efforts.”