Among these new initiatives will be a daily Violation of Probation Court (VOP), as recommended by Chief Judge Charles E. Williams, State Attorney Ed Brodsky and Public Defender Larry Eger of the 12th Judicial Circuit. That would begin in the 2019 fiscal year — which will start Oct. 1 — at a cost of about $300,000.

The funding will cover the expenses of one dedicated attorney and one administrative assistant each for the State Attorney’s Office and the Public Defender’s Office. Williams told the commissioners he would volunteer to serve as the first judge to preside over the VOP.

As soon as the staff is in place, Williams added, the program can be implemented.

At the suggestion of Commissioner Michael Moran, with concurrence of the 12th Judicial Circuit leaders, the commissioners will get an update on the number of jail diversions resulting from the VOP Court before they decide whether to fund the program for a second year. County Administrator Jonathan Lewis suggested a mid-term report, with data covering the first six months of the VOP Court’s operations. If that did not prove feasible, he indicated, he would like an update as the board works toward finalizing its fiscal year budget for 2020.

Over the past four years, State Attorney Brodsky told the commissioners, his staff has handled almost 100 VOP cases per month involving just felony offenders. With the new specialty court held on a daily basis, Brodsky said, “I think we can resolve a significant number of [violations]” and keep people out of jail.

Under the current situation, Brodsky explained, what members of the Judicial Circuit call an “early resolution docket” takes place just on Fridays. When it convenes, a prosecutor handles VOP cases that occurred during that week.

In one situation, Brodsky noted, the matter could not be resolved during a Friday VOP hearing. With so few opportunities for the person to appear before a judge, Brodsky continued, the individual ended up having to stay in jail for four months.

More regular VOP hearings should lead to more rapid resolutions of cases, he pointed out.

The other two jail diversion programs the commissioners approved on Aug. 22, during their final workshop on their 2019 fiscal year budget, are as follows:

That would reduce recidivism, Williams pointed out. As a result of the assistance they would received, he said, people on that track not only would be expected to cease criminal activity, but they also would be likely to become “productive members of our community.”

County Judge Erika Quartermaine has been the champion of the Comprehensive Treatment Court, basing it on her research into a Miami-Dade County program that had proven highly effective in aiding mentally ill persons repeatedly charged with relatively minor offenses. During 2016 presentations to the Sarasota City and County commission, Quartermaine said the recidivism rate for arrestees with serious mental illnesses — such as bipolar disorder and schizophrenia — had dropped from 76 percent to 20 percent in Miami-Dade.

Altogether, the three jail diversion initiatives would cost about $650,000. Thanks to recent reductions in the 2019 fiscal year budget for the Sarasota County Sheriff’s Office, County Administrator Lewis explained, staff should be able to fund them.

Williams pointed out that Court Administration wants to avoid the potential of a federal lawsuit over inmate crowding in the jail. As of the morning of Aug. 22, he said, the jail population was 1,029. Yet, the operating population of the facility should be “approximately 800,” he added, because — for example — juvenile inmates cannot be housed with adults, and male inmates must be separated from female inmates.

Before the commission even could consider building a new jail, Commissioner Charles Hines stressed, it would have to be able to tell the public, “We tried alternative programs.” Moreover, Hines said, “We don’t have the money to [construct a new jail].”

Hines also referenced the fact that, years ago, when community discussion arose about construction of another jail, the location proved a controversial issue.

During the Aug. 22 discussion, Hines told Williams that the board had received statistics over the past several years showing crime — and arrests — have decreased. “Where’s the bottleneck,” he asked, that has kept the jail population so high.

“More and more people are in jail serving sentences,” Williams explained. Many of them are violators of probation in felony cases, “so the jail now has become more and more of a holding area … We’re not clearing people out to the [state Department of Corrections] … as we have in the past.”

Statistics Sheriff Tom Knight and his staff provided to the County Commission in June showed that from late November 2017 to June 13, the misdemeanor population had declined from 28% of the total to 18%, but the felony population had risen from 69% to 81% of the total.

“The felonies are going up,” Knight told the commissioners on June 13, just as he and his staff had anticipated when he addressed them in late November 2017 regarding his concerns about the rising number of inmates.

After hearing the sheriff’s presentation in November 2017 about the jail population continuing to exceed the facility’s operating capacity, the commissioners directed county administrative staff to work with Knight’s staff “and all relevant parties” on proposals for more jail diversion strategies and report back to them within 90 days.

In June, Wayne Applebee, the county’s human services manager, and Kimberley Wiles, the county’s criminal justice policy coordinator, reported on regular meetings of the work group established to address the issue. That group had been meeting since early February, Applebee pointed out, to try to settle on new jail diversion proposals.

During their regular meeting on June 13, the commissioners voted unanimously to approve the implementation of six suggested strategies that would not require additional county funding. However, they asked that the members of the work group discuss the remaining recommendations and then propose a list of top priorities.

On Aug. 22, the commissioners heard an update from Assistant County Administrator Mark Cunningham.

After those were presented to the county’s Criminal Justice Commission on July 23, Chief Judge Williams explained to the commissioners, that advisory board’s members focused on the three proposals they felt “would give you the best return on the investment.” 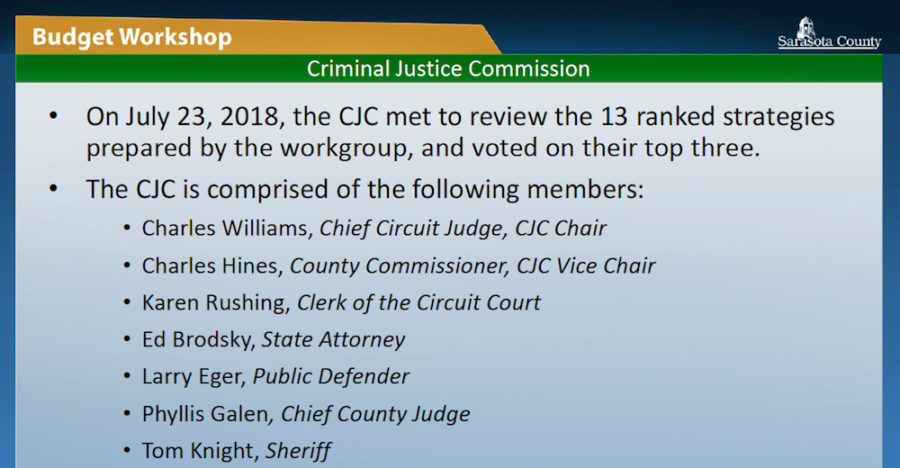 Along with expansion of the Drug Court to include the opioid track and expansion of the Comprehensive Treatment Court to include low-level felony offenders, the third measure called for creation of a Forensic Assertive Community Treatment (FACT) Program, “designed to assist 100 clients … suffering with severe and persistent mental illness to live as independently as possible through ongoing case management.” The cost of that initiative was estimated at $1.4 million.

Therefore, the total cost of the three programs was projected to be $1,751,924. That amount was not included in the proposed FY19 county budget, County Administrator Lewis pointed out.

In regard to the FACT teams, Chair Nancy Detert said, “I don’t see where the services exist out there.” She added, “We have to get more human about solving some of these problems.”

Detert explained that, as time permits, she attends hearings in the South County courtroom, located at the R.L. Anderson Administration Center in Venice. Once, she continued, she watched a case in which a man had been arrested for the sixth time for driving without a license. Perhaps he could not read, so he could not pass the driving test, she told Williams.

One of the first cases in the Comprehensive Treatment Court, Williams responded, involved a man who had been found sleeping in a park; he did not comply with the direction of police officers, who told him to leave because he was breaking the out-of-door lodging law. As it turned out, Williams noted, the person “was deaf.”

After the person received hearing aids — as a result of the Comprehensive Treatment Court’s hearing of the case — Williams noted that the person ultimately was able to find gainful employment.

Zeroing in on a decision

As the board members discussed the VOP Court proposal,

Commissioner Hines — as vice chair of the county’s Criminal Justice Commission — indicated that he had heard quite a few details about such programs. He recalled that they are being tried in other jurisdictions, he told Public Defender Eger.

“[The program] is in other jurisdictions,” Eger replied. “It does reflect … efficiency.”

Hines then pointed out that the county could fund the proposals for expanding Drug Court and the Comprehensive Treatment Court, but not the Forensic Assertive Community Treatment (FACT) Program. The latter, he noted, costs “a lot [of money].” He suggested the substitution of the VOP Court for the FACT program.

After Chair Detert said she would like more details about the program, County Administrator Lewis agreed that extra information would be useful.

Detert then asked Hines, as a Criminal Justice Commission member, if he was satisfied with the details he and his colleagues on that advisory board had heard about VOP courts.

“This didn’t just come out of nowhere,” Hines replied, adding that he wished more information had been provided to his fellow commissioners and Lewis.

Hines ended up making the motion to approve the expansions of the Drug Court and the Comprehensive Treatment Court and to fund the initial year of the Violation of Probation Court for felony offenders. Commissioner Moran seconded the motion, and it passed 5-0.