Army Corps of Engineers spokesman says project could start within three months, depending on variety of factors, including weather

Amid all the constant updates, concerns from residents and complaints related to the novel coronavirus situation, Sarasota city commissioners recently did receive some good news in their email inboxes.

After Barwin forwarded the information to the city commissioners, Mayor Jen Ahearn-Koch replied the same day: “Any good news is welcome, but this is big!”

The bid award came almost exactly six-and-a-half years after the original USACE manager of the Lido project announced the plans during a public meeting in Sarasota. The USACE proposes to remove up to 1.3 million cubic yards of sand from Big Sarasota Pass to place about 710,000 cubic yards of sand on about 1.56 miles of South Lido Key Beach, project documents show.

Responding to Sarasota News Leader inquiries about the award, David J. Ruderman, spokesman for the USACE’s District Office in Jacksonville, wrote in a March 19 email that the bid went to Cottrell Contracting Corporation of Chesapeake, Va., in the amount of $12,688,582.

DavisShaw provided the very same information to city staff in her correspondence.

“As for a schedule,” Ruderman continued, “there are no firm dates yet. Project manager estimates 2-3 months between award and actual operations on the beach. It varies depending on weather, environmental windows, other projects the contractor may have ongoing, a whole bunch of factors.”

In his March 20 newsletter, City Manager Barwin noted both the news and the brevity of details from the USACE.

“In the midst of this global upheaval,” he wrote, referring to the COVID-19 pandemic, “we received some much-needed good news! The U.S. Army Corps of Engineers informed us this week that it has awarded a contract for the long-awaited renourishment and restoration of Lido Beach.”

Barwin added, “We have limited details at this writing; however, we can share that the awarded contract is within the amount the City budgeted, so we will not have to tap into additional funds.”

Three times, City Engineer DavisShaw had placed an item on a City Commission agenda, proposing the city could offer up to an additional $1.3 million from the beach renourishment funds it receives from Sarasota County, if that were necessary to supplement the funds the USACE had available for the project. She pointed out in staff memos that the USACE had no recourse if all the bids came in at higher amounts than the USACE could cover.

In August 2019, the USACE canceled the first solicitation for the Lido project after the only two bids it received were well above its estimate. The federal agency called them “unreasonably high.”

The USACE had estimated the cost of the project at $14,149,000 in that solicitation.

In the staff memo she prepared to accompany the proposed amendment to the city’s partnership agreement with the USACE, DavisShaw noted “that the estimated cost of the initial project is $19,577,231 of which the Department of the Army will fund 65%,” with the city responsible for the remaining 35%. (She has explained to the commissioners that a state grant will cover half the money due from the city.)

In a March 17 email exchange with the News Leader, responding to questions, DavisShaw wrote that she had removed the proposed, amended partnership agreement between the city and the USACE from the March 16 City Commission agenda, waiting to see what the bid award would be. Like the News Leader, she noted that she had received notification from the USACE that the award would be announced “on or about” March 17.

The state permit for the Lido initiative, which the USACE and the city received from the Florida Department of Environmental Protection (FDEP) in June 2018, is valid for 15 years. USACE staff has estimated that more new sand will have to be placed on the Lido shoreline approximately every five years after the first project has been completed.

Barwin added in his March 20 newsletter, “This long-term project with the USACE has been decades in the making to restore and protect the infrastructure, dunes and wildlife along our severely eroded beach. We certainly have much to look forward to on the other side of this virus.”

Two lawsuits — one in the U.S. District Court in the Middle District of Florida, in Tampa; the other, on the docket of Florida’s Second District Court of Appeal — seek to prevent dredging in Big Pass to renourish the Lido shoreline.

Leaders of Save Our Siesta Sand 2 (SOSS2), who filed the federal case in January 2019 against the USACE, had hoped to have a ruling in February.

Attorney Jane West, whose eponymous firm is based in St. Augustine, filed their final brief in the case in December 2019.

SOSS2 representatives have told the News Leader they are unsure when they will have a decision.

The Appeal Court case was filed by the Siesta Key Association (SKA) after it lost its 12th Judicial Circuit Court case to the City of Sarasota last fall. The city’s response to the SKA’s brief is due in early April, court records show.

In a March 25 email to the News Leader, USACE spokesman Ruderman explained why the agency could provide few details to the public about the Cottrell Contracting offer and contract. “The solicitation and award were conducted under what’s known as a MATOC — multiple award task order contract — which is source selection sensitive … according to our contracting division,” he wrote.

While researching that process, the News Leader found a Jan. 31, 2011 article by Michael H. Payne, which was posted on the Federal Construction Contracting Blog.

“There is an old saying that ‘you win some, and you lose some,’” Payne wrote. “Well, if you are a construction contractor who competes in the world of Multiple Award Task Order Contracting (‘MATOC’), you usually lose. Under sealed bidding, which dominated the procurement of federal construction for many years, a contractor who was not the low bidder could always compete for the next project. In the MATOC arena, a contractor who is not selected to be one of the chosen few to compete for task orders over what is often a three to five year period may not be able to compete for the ‘next project’ for a long time. What this means is that there are a few winners, but there are many more losers.”

Payne continued, “Every construction MATOC features a ‘seed’ project that serves as the basis of the price competition for the evaluation of the offers on the master contracts. If a contractor does not win the seed project, there may not be another task order for a long time, and the award of the ensuing task orders may go to someone other than the low bidder. The reason for this is that most construction MATOCs are negotiated, best value, procurements (‘RFPs’), and past performance, experience, technical merit, quality of personnel, small business subcontracting, and other evaluation factors may come into play.”

At the time of the article’s publication, Payne was partner and chair of the Federal Construction Group at Cohen Seglias Pallas Greenhall & Furman, PC, which has offices in New York, Philadelphia and Washington, D.C., among other locations. His bio added, “Michael has vast experience in federal government contracting, stemming from his time as Chief Trial Attorney for the North Atlantic Division of the Army Corps of Engineers, and is recognized in the federal construction contracting industry as an attorney who enjoys a good working relationship with government agencies.”

In an earlier article, published on Jan. 13, 2011, Payne pointed out that the USACE’s Jacksonville District office had awarded most of its construction contracts for 2011 under the MATOC process.

While searching the General Services Administration website for federal awards, the News Leader found a report showing that the USACE and Cottrell Contracting signed an agreement on May 1, 2019. That information about Cottrell listed the same code number the USACE included in the Lido Key solicitation.

In further research on the GovTribe.com website, the News Leader found that that contract covers “dredging and shore protection projects within the Boundaries of the [South Atlantic Division] SAD” of the USACE. The potential value of all the work, GovTribe.com says, is $450 million.

On its website, Cottrell Contracting says it was established in 1938 and “has a long history of infrastructure dredging along the eastern seaboard.”

A second project entailed the dredging of about “200,000 cubic yards of maintenance material” from the Cape Charles Channel in Cape Charles, Va.

A third project listed on the website was the maintenance dredging of the Norfolk, Va., harbor and Craney Island Reaches, as well as Norfolk’s international shipping terminals’ access channels and berthing areas. That dredge “involved approximately 875,000 c cubic yards of material, including allowable overdepth,” the website notes.

Under Cottrell’s “Company News” heading on its website, it lists contract awards for maintenance dredging projects on North Carolina’s Outer Banks, as well as a “Restoration Project” on Poplar Island in Talbot County, Maryland.

In its research, the News Leader also found a Jan. 22, 2019 notice on the Defense Daily website saying that Cottrell was awarded a $12,740,080 contract for maintenance dredging in Jekyll Island, Ga., and Daufuskie Island, S.C., “with an estimated completion date of Aug. 2. 2019.” The USACE office in Savannah, Ga., awarded that bid, the notice added. 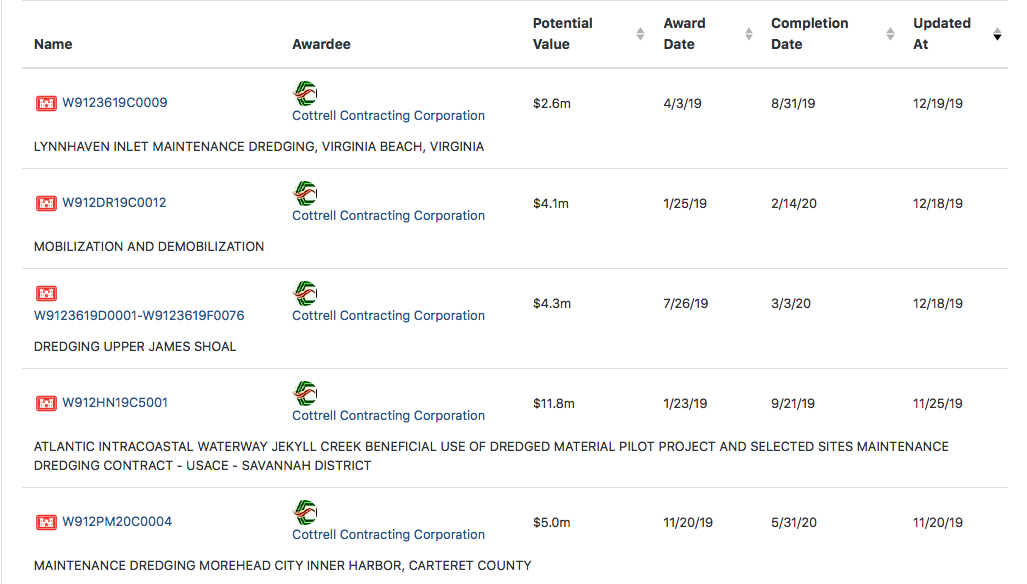 On Jan. 19, 2007, the company won a $5,344,000 “firm-fixed-price contract” to handle maintenance dredging of the Atlantic Intracoastal Waterway, the Morehead City, N.C., harbor and the Beaufort, N.C., harbor. That information was published by MilitaryIndustrialComplex.com.

“We have a fleet of nine dredge tenders, three floating cranes, three booster barges, five fuel barges and seven equipment barges as well as numerous pieces of earth moving equipment to support our dredging operations,” the company points out on its website.