City manager to convey that to county administrator before city board’s August meeting and then work on a list of projects the $2.6 million could fund

Having received no correspondence regarding the Sarasota County Commission’s discussion of the issue last week, the Sarasota City Commission took about 40 minutes this week to decide on its next steps in the city’s nearly 15-month-long effort to collect one final county payment into the Downtown Sarasota Community Redevelopment Area (CRA) Trust Fund.

The City Commission voted unanimously on July 17 to have City Manger Tom Barwin send a letter to County Administrator Tom Harmer, telling Harmer the city wants half of the approximately $5.2 million — counting interest — of the disputed CRA money.

In the meantime, Barwin will prepare what he characterized as “an internal working paper” on proposals for how the funds could be spent on city projects, if the county pays up.

Commissioner Jen Ahearn-Koch made the motion for the settlement offer, and Commissioner Willie Shaw seconded it.

With the city board members continuing to debate potential projects the city could propose to the county, seeking its financial support, Ahearn-Koch finally suggested they “throw out a number; split it down the middle. … No litigation, no going back and forth with projects … Make it quick and easy.”

Asked for clarification about the amount, she said she would go with the $5.2 million figure as the total, based on the interest that has accrued to the approximately $4.6 million the city says the county owed it for the final Downtown Sarasota CRA payment.

At the outset of the discussion, Barwin explained that he had received no response from Harmer since the County Commission on July 11 discussed the proposed settlement letter Barwin sent Harmer on June 20. (Harmer responded to Barwin in a letter dated July 5. The county commissioners said on July 11 that they supported what he had written.) All he knew about the county board members’ comments were what he had read in the news media, Barwin told his board on July 17. He had tried calling Harmer three times before the start of the city meeting that day, he continued, but each time, he was told Harmer was unavailable.

“Clearly,” Barwin said, “[the county commissioners] do not appear interested in participating in the Newtown CRA financially.” (His June letter sought the county’s agreement to provide 30 annual payments into the Newtown CRA Trust Fund after that CRA begins to produce property tax revenue.)

The county board members also reiterated their opposition to providing yearly financial support to the Robert L. Taylor Community Complex, Barwin added, even though city data shows that more than 60% of the facility’s users live outside the city limits.

“It appears they are interested in funding projects,” Barwin told the City Commission, using his hands to indicate quotes around the word “projects” as he said it. “The problem with funding projects so far has been that we’ve never been able to get a solid number from the county” regarding what it would be willing to pay.

In his July 5 letter, Harmer reminded Barwin of Harmer’s and the County Commission’s willingness to have the city apply for funding of projects through the county’s Community Reinvestment Program (CRP). The county board reinstated that initiative in the fall of 2015 to replace its participation in the Downtown Sarasota CRA.

The CRP fund has about $1.4 million in it; any municipality — and any county program — can apply for grant support for a capital improvement project designed for economic development. One goal of the CRP, commissioners said in 2015, was to help spur public/private partnerships to expand the tax base in the county.

Referring to the CRP suggestion, Mayor Shelli Freeland Eddie pointed out of the county commissioners and staff, “They did not agree to set aside any dollars. We would still have to apply for dollars. So, really, there is no settlement. To me, that’s not an offer.”

“This commission’s, I thought, fairly unified voice was to work on economic development in North Sarasota,” Barwin pointed out on July 17, referring to the city board’s June 19 CRA settlement discussion.

“The brightest hope” for reaching an agreement with the county, Barwin continued — based on news media reports of the July 11 County Commission meeting — was Vice Chair Nancy Detert’s suggestion that she would be willing to entertain the idea of resolving the issue through a cash payment.

As county commissioners discussed the latest correspondence between Harmer and Barwin, Detert said, “I would think that the public would expect us to settle, maybe even for cash, somewhere in the middle and just make [the dispute] be over.”

Detert added that her second choice — if the city board and staff “can’t resolve this quickly” — would be for the county commissioners to speak one-on-one with staff of the Office of the County Attorney about how that staff feels the county would fare if the matter went to court.

Deputy County Attorney Frederick “Rick” Elbrecht has told both commissions he is so confident that the county would win the case, he would ask for a jury trial.

During the city board’s July 17 discussion, Freeland Eddie explained that, over the previous weekend, she had compiled a list that she proposed as a settlement with the county:

A disruption in city staffing, Barwin explained on July 17, resulted in the delay in using those funds. However, he said, the city is going to spend $150,000 out of the balance to support a new restaurant in Newtown; the rest will assist the Newtown Farmers Market.

Vice Mayor Liz Alpert said the county grant funds should not be considered part of the CRA settlement agreement.

Referring to Detert’s comment, Freeland Eddie continued, “I’d love to get a check and be done,” but the city board also could propose projects.

“My suggestion is that we go with what Commissioner Detert suggested — that we split id down the middle,” Alpert responded. “We gave them specific projects, but they didn’t have an interest in that.”

If the city did provid the county with a project list, the expenses would have to add up to $2.6 million, Alpert added. “I’m not willing to settle something” with the proviso that the county pay for projects with no figures attached, Alpert told her colleagues.

Commissioner Hagen Brody said he watched the county board discussion, and he did not see the other commissioners agreeing with Detert.

“To me, the county has been very clear,” he pointed out, referring to its request for details of specific city projects it could fund. “Otherwise, we’re going into litigation. We’re going to have taxpayers funding both sides of it … and, frankly, I want to stay as far away from that as possible.”

If the city proposes projects, Brody continued, they should add up to the disputed amount of the last Downtown Sarasota CRA payment.

“The whole idea of the [Downtown Sarasota] CRA came from blight,” Commissioner Willie Shaw pointed out. “We have a beautiful downtown,” he added, but Newtown needs assistance. The latter should be the focus of any county funds to settle the dispute, he said.

“[I am] wondering why we’re having this guessing-game conversation about what the county wants,” Commissioner Ahearn-Koch told her colleagues. “I would love to hear from the county.” 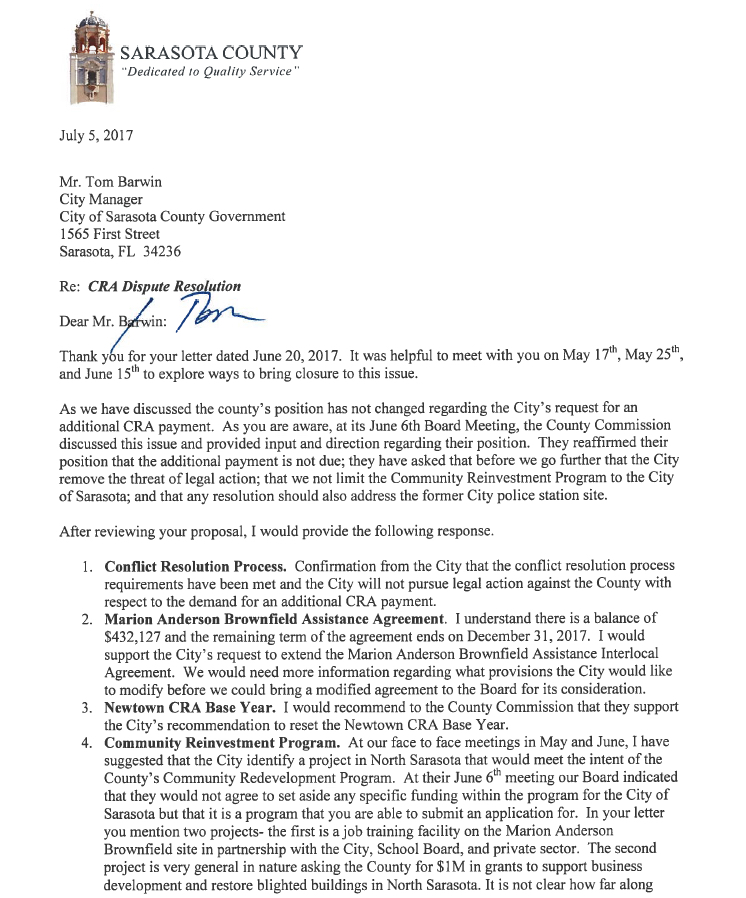 “Well, we don’t know unless we ask,” she responded.

“I have to rely upon what the county administrator is telling me,” Barwin stressed. However, even though Harmer has asked for project proposals, Barwin noted, Harmer has offered no dollar amount or even a formula for funding the city’s requests.

During further debate about potential city projects — including plans to remodel Fredd Atkins Park as a gateway to North Sarasota — Vice Mayor Alpert said, “I don’t know why this isn’t a shade meeting. It seems just ludicrous to me [to be discussing the settlement in public].”

City Attorney Robert Fournier reminded her that the city is not involved in litigation with the county; thus, the members cannot discuss the terms of a settlement out of the public eye.

“If they want projects, let them tell us what projects they would like to fund,” Alpert finally suggested.

“I disagree,” Freeland Eddie responded. “I’ve never relied on the opposing party to tell me what I want. It’s my stuff. It’s my city. It’s my land. … It’s either ‘Yes’ or ‘No’ or a counter-offer.”

Barwin suggested the board let him work with Harmer prior to its first meeting in August, with the hope of firming up a list of projects to submit to the county.

Then Ahearn-Koch proposed her motion, and the board members moved quickly to take the vote.