Board to vote on necessary budget amendment on May 12, and then staff to launch initiative

It took three tries at a motion on May 4, but the Sarasota city commissioners finally voted unanimously to approve a grant program for small businesses struggling to survive as a result of the novel coronavirus pandemic.

Among those would be small retailers and personal services firms — nail and hair salons, for examples — as well as maintenance companies and repair and cleaning services.

Commissioner Hagen Brody made the winning motion, which called for a grant of up to $5,000 to go to city businesses with 25 or fewer employees that have not received funds from the federal Paycheck Protection Program (PPP) or the U.S. Small Business Administration’s Economic Injury Disaster Loan Emergency Advance program (EIDL). Preference will be given to those, as well, that did not receive any funds from a program administered by the Economic Development Corp. of Sarasota County and county staff. (See the related article in this issue.)

The city funds — totaling $2,284,609 thanks to Local Business Tax Receipt revenue ($1,350,000) and money in the Newtown and Downtown Community Redevelopment Area trust funds — will be distributed on a first-come, first-serve basis. It will go to companies that qualify under criteria proposed by the city’s Economic Development Department.

If any funds remain after the initial round of applications have been processed, Brody added, businesses that received county EDC money could be considered in a second round.

City Manager Tom Barwin also pointed out that the commissioners would need to approve a budget amendment to transfer the funds for the grant program. The board members agreed unanimously on another vote to schedule the necessary agenda item for a special meeting on May 12.

“Investing in our businesses and helping them out now,” Mayor Jen Ahearn-Koch said, “[will] support the entire community …”

Although Vice Mayor Shelli Freeland Eddie lobbied for professional services firms to be eligible for the assistance, Brody argued against that.

“They weren’t shut down by the governor,” Brody told Freeland Eddie, referring to Executive Orders that Gov. Ron DeSantis issued in March and again in April, closing specific types of businesses.

Moreover, Brody said, “I’m afraid that not only will [professional services firms] be Johnny on the spot to receive a grant, but [they are] going to box out a lot of the people that we’re trying to help in the first place …”

Freeland Eddie countered that just because CPAs and attorneys, for example, could continue to practice after DeSantis’ April 3 Executive Order went into effect, closing all but “essential businesses,” that did not mean those types of small businesses did not experience hardship. She called Brody’s assertion “just factually inaccurate.”

(Both Freeland Eddie and Brody are attorneys.)

However, Commissioner Liz Alpert agreed with Brody. “They were not ordered to close like some of these other businesses,” such as hair and nail salons and fitness centers, which “have virtually no income … We have limited funds.”

Steve Stancel, general manager of the Economic Development Department, pointed out that city staff had identified about 1,700 businesses that would be able to meet the criteria for the grants, which were set forth in a recommendation to the commissioners. Therefore, he said, about 26% of those would be able to get grants out of the $2.3-million pot.

If the commissioners agreed to include professional services firms among eligible businesses, Stancel pointed out, “Where do you stop?” Along with CPAs and attorneys, he noted, doctors and dentists would be eligible.

“The criteria really should try to meet the money that we have available,” Brody stressed.

Barwin also explained that staff will “finalize a simplified application” and provide it to City Attorney Robert Fournier for review. Further, Barwin proposed that each business that receives funding provide documentation — including copies of receipts showing how the money was used — to the city staff within 90 days, so staff could close out its paperwork on the grants.

“This is unusual for a community our size to do something like this,” Barwin said of the program. “We have to keep our own house in order,” he pointed out, referring to city finances.

Brody first made a motion that called for approval of the grant program as Stancel had proposed it in the backup agenda material for the May 4 meeting.

That motion did not give priority to businesses that received no funding from the Sarasota County program.

Stancel explained to the city commissioners that a firm applying to that Small Business Resiliency Loan Program could get up to $25,000 and pay zero interest in the first year. If the company paid all of the money back before the first year ended, then 20% of the funds — $5,000 — would be considered a grant. A company could keep the funds for up to three years with 3.5% interest to be charged in the second and third years, Stancel noted.

The county’s application period opened at 9 a.m. on April 27, he continued, and it closed at 5 p.m. the same day, after receiving 369 applications. The County Commission had agreed that no funding beyond the approximately $4.3 million in its Economic Incentive Fund would be provided to applicants. (See the related article in this issue.)

Brody pointed out that the county program also necessitated that owners of the businesses sign personal guarantees that the money would be paid back. If they are unable to return the funds, he added, the county could bring suit against the owners to try to recover the funds.

When City Auditor and Clerk Shayla Griggs called for the votes, Mayor Ahearn-Koch said she could not support the motion as Brody had stated it. “I think that we need to have a prioritization in place” for those that received no county assistance, she added.

After Alpert and Brody cast their “Yes” votes, Freeland Eddie took a few moments before answering when Griggs called her name. Finally, Freeland Eddie asked if she could get a point of clarification.

City Attorney Fournier and Griggs said that that would necessitate starting the process all over. Still, Ahearn-Koch allowed Freeland Eddie to ask the question, which focused on why city staff had proposed that firms that received PPP assistance should be excluded from the city grant program.

City Manager Barwin explained, “That came up in the administrative analysis.” It was not part of Stancel’s proposal.

Barwin called that exclusion “a good strategy, by us, to help those who have not received help.”

Freeland Eddie then pointed to the fact that the idea seemed to be to stretch the city money “as far as possible,” by excluding businesses that received PPP funds or the EIDL assistance; yet, the motion would allow those firms that won county funds to apply for the city grants.

“Very few businesses have gotten PPP loans in the city,” Brody told her.

Ahearn-Koch acknowledged that she also was struggling over the motion as worded. “The point of our money is to help as many businesses as we can who have nothing,” she said, especially what she characterized as the “Moms and Pops.”

She added, however, that she did not want to punish city businesses that jumped at the chance to receive some of the county aid.

“I would be more comfortable if folks who got county money were serviced after the round of applicants that got nothing from anyone,” Barwin said. 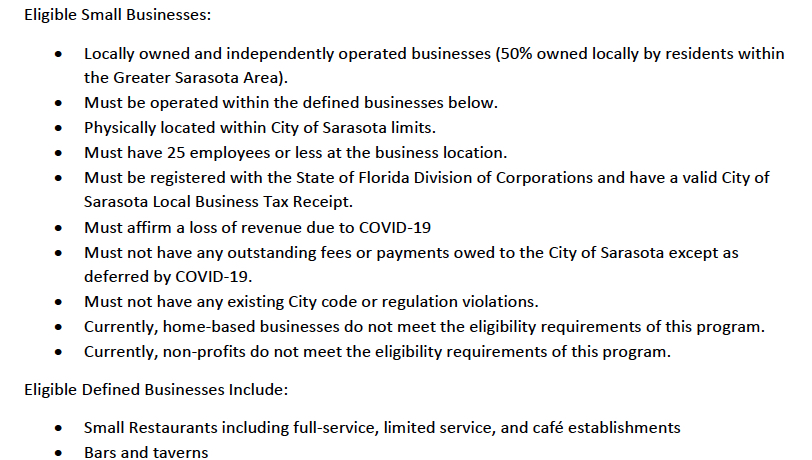 Then, as Griggs and Fournier had advised, Brody again made his motion. He still included as eligible those city businesses that won county loan funds.

No one else spoke, so Ahearn-Koch announced, “Motion dies for lack of a second.”
Brody made another motion, calling for the exclusion of those city businesses that received county funds, as well as those that won PPP and EIDL help.

Fournier then asked for clarification that businesses that did get county loan funds could be considered as part of a second tier of city grant recipients.

Alpert affirmed her second, and the motion passed unanimously.