Sarasota County Commissioner Nora Patterson this week found herself in the minority on a split vote that she will have to try to sell to another board next week.

Applications from Sarasota County law enforcement agencies for Fiscal Year 2013 funding from the West Coast Inland Navigation District exceeded the 30% cap the WCIND Waterway Development Program imposes for those agencies in counties’ total allocations, Laird S. Wreford, the county’s coastal resources manager, explained in a memo and in a presentation to the County Commission on July 11.

Additionally, Wreford noted in his memo, the total of the requested funds for FY 2013 from 22 county agencies was $1,893,780, whereas the WCIND Waterway Development Program funding available to the county was $1,360,000.

The Coastal Advisory Committee, which annually reviews the funding requests, had suggested the County Commission use reserves from its County Navigation Improvement Fund to cover a portion of the funding request overage, “but only to the extent that the CNIF fund balance does not fall below $300,000,” the memo added.

On a 3-2 vote, with Chairwoman Christine Robinson joining Patterson in voting “No,” the County Commission approved a 9.3% across-the-board reduction in the original grant requests from the law enforcement agencies and agreed to use $533,519 from the CNIF to meet the other funding requests.

However, the final figures mean the county application will exceed the WCIND cap for law enforcement agencies by 1.7%.

“I would like to see the numbers at 30%,” Robinson told Wreford before the vote during the July 10 regular meeting in Venice. “I’m concerned that next year we might be in a different boat” in terms of requests and reserves.

“I think we need to live within [our] means,” she added.

“I would prefer that as well,” Patterson said.

Nonetheless, Commissioner Joe Barbetta made a motion to approve the funding request with the 31.7% level for the law enforcement agencies’ requests.

After it passed, with Commissioner Carolyn Mason joining Barbetta and Thaxton in the majority, Patterson said, “You know I’m obviously going to represent the board on a majority vote, and I will do so strongly.”

She sits on the WCIND board.

However, she said, she had no idea whether the WCIND board would approve the law enforcement agency total at the 31.7% mark.

The WCIND board is scheduled to meet July 18, Wreford said.

In that case, Patterson responded, she could come back to the County Commission during an August meeting if a further reduction was necessary in the law enforcement agencies’ requests.

Wreford’s initial presentation about the WCIND funding application led to discussion and debate that necessitated his returning with new numbers prior to the end of the July 10 meeting.

He explained that the five law enforcement agency requests for FY 2013 included the cost of a new patrol vessel for the City of Sarasota. The total for the five agencies was $601,179.

After being told the amount exceeded the 30% cap, he said, two of the agencies lowered their initial requests — the Sarasota County Sheriff’s Office and the Town of Longboat Key.

Those “are much reduced from what the initial request was,” Wreford said.

Barbetta pointed out that the Sheriff’s Office cut was about $42,000.

If the commission accepted the CAC’s recommendation of cutting all the law enforcement agency requests at the same level, the Sheriff’s Office and the Town of Longboat Key “would get a double whammy,” Barbetta said.

Wreford’s memo noted the CAC recommendation was for a 13.29% across-the-board cut for those agencies to reach the 30% mark.

The memo added that the CAC also had proposed the following cuts to maintain a higher CNIF fund balance:

• Eliminate a $16,416 request from Mote for manatee aerial surveys.

As Wreford presented various options for the FY 2013 funding requests, Barbetta said, “I still have problems with two of five [law enforcement] projects being penalized,” referring to the Sheriff’s Office and Longboat Key.

Then Wreford suggested that he could go back to the original requests and adjust them all equally across-the-board.

Patterson and Barbetta said they preferred that, though Patterson proposed Wreford stick to the 30% mark for the final figure.

She added that she did not want to cut the Mote funding.

When Wreford returned at the end of the board meeting, he presented figures showing that the 9.3% across-the-board adjustment for the law enforcement agencies would give the Sheriff’s Office $215,480, while Longboat would get $117,000.

“This seems to me to be the biggest pile of requests we’ve ever had,” Patterson said.

“It’s a little bit greater than the request for last year,” Wreford told her.

In an interview with The Sarasota News Leader, Dave Bullock, manager of the Town of Longboat Key, said, “I think on the law enforcement side, what they did was fair. … We fully understood the funding pressures.”

He added, “In my ideal world, I would have thought everyone would have done what the Sheriff’s Office and the Town of Longboat did” in reducing their initial requests when given that opportunity.

The following chart shows all the WCIND funding requests for Sarasota County for the 2013 fiscal year prior to the County Commission’s adjustment of the law enforcement agency requests on July 10: 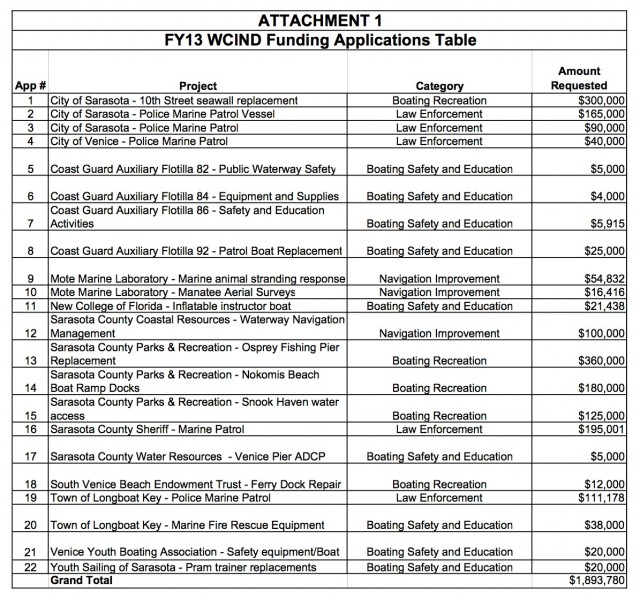