Better separation of bike lanes from vehicle lanes, roundabouts, a redesigned intersection at Midnight Pass Road and Stickney Point Road, use of notification signage and even aerial gondolas are among the recommendations a Tampa consultant will offer the Sarasota County commissioners in late March as means of improving transportation and safety on Siesta Key.

If the commission directs staff to explore specific recommendations, then the consultant — Jason Collins — would work with county staff to develop cost estimates and proceed with design and engineering, as well as funding options, Collins told about 35 members of the Siesta Key Condominium Council on Feb. 18.

A licensed engineer and certified urban planner with the company ADEAS-Q, Collins offered a preview of the recommendations he will present to the commission, tentatively on March 24.

County staff hired him last year to work with leaders of Siesta Key organizations and residents to come up with a variety of options, Collins explained during the meeting at Siesta Key Chapel. The short-term options, he said, could be completed in up to five years; the medium-term, five to 10 years; and the long-term initiatives, 10 or more years. He produced a draft of his report in December 2019, he added. 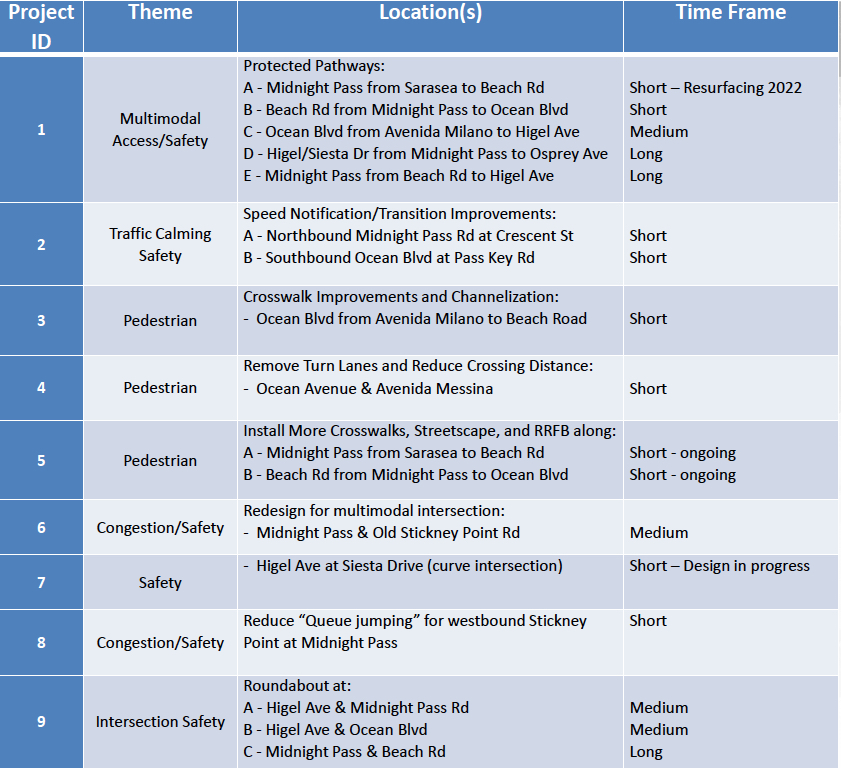 “The purpose is to basically provide a game plan, or template, for funding priorities and plans,” he pointed out. Another goal is to propose ideas that would be competitive in applications for state and federal grants, Collins added.

He ended up with a list of 18 potential initiatives, Collins continued. “That’s a little bit more than we originally expected,” which was more in the range of five to 10, he said.

Starting at the top of his list, Collins told the Condo Council members, “I’ve been hearing a lot of talk about bicycle safety and accessibility.”

He showed them a slide of the vehicle travel lanes, the bicycle lane and the sidewalk in the area of the 7-Eleven located at 6619 S. Midnight Pass Road. “I would not let my children ride along this street right here.”

The bike lane is divided from the vehicle lane by only a white line, the slide showed, and the sidewalk is right next to the bike lane, with some curbing to separate them. “There is nothing stopping a car from running off the road and sideswiping you,” Collins pointed out. “Not much level of safety.”

His suggestion, Collins continued, is to provide “protected pathways to make sure the vehicles do not run off the road.”

The slide showed examples of posts and even a type of planter used to separate bicycle lanes from the travel lanes for motorists.

With devices in place, he emphasized, drivers are more likely to slow down and stay in their lanes.

Moreover, Collins noted, “I think there’s a latent demand of people wanting to use their bikes more [on Siesta Key].” If just 5% more people shift to bicycles as their primary mode of travel, he added, that “fixes a lot of congestion [issues].”

Then Collins discussed his recommendation for signage to warn drivers they are approaching road segments with lower speed limits.

For example, he said, northbound drivers on Midnight Pass Road in the vicinity of Crescent Street — heading toward the Stickney Point Road intersection — suddenly must slow down from 40 mph to 25 mph. “People only start letting off the gas once they get into the 25-mph area.”

“That is a big variance,” he stressed of the change in speed limits.

Turning to another area that he said has been among his big concerns, Collins showed the audience an aerial view of the intersection of Ocean Boulevard, Canal Road and Avenida Messina in Siesta Village — “basically the busiest intersection, I believe, on the Key.”

In his experience, Collins noted, four-way stop signs — such as those at that intersection — are confusing to motorists. Drivers are unsure who has the right of way, he said. “Additionally, you have a lot of crosswalks [in that vicinity].” which are not readily identifiable as such, he continued.

Furthermore, Collins noted, no means exists to channel pedestrians to those crosswalks. “Many times they just jump out to cross the street.”

One other hindrance, he said, is the dark red pigment of the pavers on the sidewalks and crosswalks, which makes the latter more difficult to see at night. Reflective surfaces and well-light crosswalks are preferable, he pointed out.

Then he noted the intersection of Avenida Messina and Columbus Boulevard, to the west of the four-way Village intersection. “This is a high pathway area,” he said, with valets working in the evenings and at night to park vehicles. “People have to walk right in the middle of the street.”

Improvement is needed, he continued, but “it’s also going to be difficult,” because of the necessity of negotiating with the owners of the businesses that use the valet services.

Collins next turned his attention to the multiple crosswalks on the Key, especially noting the use of “RRFBs” on Midnight Pass Road between the Beach Road and Stickney Point Road intersections. “RRFB” stands for Rectangular Rapid Flashing Beacons, he explained.

The buttons pedestrians push to use those crosswalks activate yellow lights, he continued. Although people have suggested to him that the lights should be red, he said, under state law, a vehicle would have to stop for an extended period for any red light.

Earlier that day, Collins added, he saw a car drive through a crosswalk as a pedestrian tried to reach the other side of the road. “It was a close call. … I think there’s an opportunity to design these a little better,” he said of the crosswalks, to draw drivers’ attention to them.

Perhaps landscaping and greenspace, he noted, would serve as traffic calming measures to slow down motorists approaching the crosswalks.

He also suggested more consistency in the placement of the crosswalks, saying they should be a certain distance apart — such as 500 feet or 800 feet.

Then he turned his attention to the intersection of Stickney Point Road and Midnight Pass Road, adding, “This has been looked at over the years,” referring to the Florida Department of Transportation’s efforts to improve pedestrian safety in that area.

His suggestion, he continued, is to “put this intersection a bit further west” and create center islands where people crossing the road could wait to be sure traffic would stop for them.

He also emphasized the difficulty of motorists trying to turn left from Old Stickney Point Road onto South Midnight Pass Road. “This is a blind intersection right here.”

Yet, “The biggest challenge here,” he continued, “is all these driveways” concentrated into a tight space near that intersection. He counted six as he showed the audience the slide.

Further, Collins noted the need to stop what he called “queue jumping,” as drivers headed west on Stickney Point Road often cut off other motorists as they switch lanes, depending on whether they intend to go north or south on Midnight Pass Road. He proposed separators between the travel lanes to stop such incidents, extending the structures about 300 feet east of the intersection.

One man in the audience told Collins that that was not enough distance. The man added that the separators should go all the way east to the drawbridge.

His next point of focus was the area encompassing the intersections of Midnight Pass Road and Higel Avenue with Ocean Boulevard. Drivers turning left from Ocean onto Higel have to hope that those using their right-turn signals really are going to turn onto Ocean and not proceed straight after all, Collins pointed out. “That causes a lot of delay.”

A woman in the audience voiced her frustration with drivers who refuse to use turn signals as they approach the Ocean/Higel intersection from the north. “It’s so easy!” she said, to make their intent clear.

However, another woman in the audience pointed out that drivers heading south on Higel used to have a left-turn light, “and pedestrians claimed that they could never get across [the road].”

“There’s always a story behind a location,” Collins replied.

His solution to the problems in that area, he continued, is roundabouts. Collins added that he designed the roundabout at the intersection of Orange Avenue and Main Street in downtown Sarasota. That has structures to keep pedestrians in the walkways, he pointed out, which makes the situation safer.

Paid beach parking and the trolley

Next, Collins proposed a paid parking program at Siesta Public Beach for visitors, with residents and/or county taxpayers being able to use the lot for free.

“It would alleviate a lot of the roaming that people do,” he added, as they search for spots in the parking lot. “Anyone that’s walking to their car basically is stalked by people.”

Furthermore, Collins proposed the use of apps and electronic message boards to alert drivers to up-to-date information about space availability in the public lot.

He did caution that if the County Commission agrees to implement a paid parking program at Siesta Public Beach, it should do the same at Turtle Beach. Otherwise, he said, the situation at the former would “totally shift the demand” to Turtle Beach.

Collins then turned his attention to the Siesta Key Breeze, the island’s open-air trolley. “It seems like it’s getting a lot of use.”

He recommends a schedule that would ensure a trolley would reach each stop approximately every 10 minutes. “The less people wait, the more the more likely they are to use [the Breeze].”

He added that county staff also needs to provide shade and benches at the stops. Those features, he noted, go “hand in hand with the comfort level of people wanting to use [the Breeze].”

Among his final recommendations is implementation of a water taxi service from Phillippi Estate Park on South Tamiami Trail — which has water access — to a site on Siesta, though he indicated no research thus far has produced a set of potential locations for the taxi’s berth on the Key.

One other long-range option could be an aerial gondola, Collins told the audience. “My kids love it at Disney World. … Something like this provides flexibility … It could almost be a micro-mobility transfer situation.” People using the gondola could get on a bus or the trolley after they reached its station on the island, he said, and then head to their destinations.

Finally, Collins advocated for a bike-sharing program on Siesta, for which people could use an app. However, he advised that electric bikes and scooters should be options as well as pedal bicycles.

“Transportation/mobility is as much a social science as it is an engineering science,” Collins told the audience.