The Sarasota County Commission took its formal vote on the issue this week. All that remains is Sarasota City Commission approval for a new interlocal agreement on parks management to go into effect between the two local governments.

The City Commission is scheduled to take its vote during the evening session of its regular meeting on July 16. The item is the last one scheduled under New Business.

As Carolyn Brown, director of the county’s Parks, Recreation and Natural Resources Department, pointed out to the County Commission during its regular meeting on July 11, the existing interlocal parks agreement with the city dates to May 25, 2011. It has been amended a couple of times, she noted — most recently on Dec. 13, 2016, to remove Hart’s Landing and the Saprito Pier from the list of parks maintained by the county within the city.

Then, on Nov. 28, 2017, she reminded the board members, they voted 3-2 to allow the county administrator to send a letter to each of the municipalities, providing notice of the county’s intent to terminate its interlocal agreements with them regarding parks. (Commissioners Nancy Detert and Paul Caragiulo voted “No” on the request to send the letters.)

The county commissioners were working on a variety of strategies at that time to reduce expenses in an effort to balance their 2019 fiscal year budget. Because of termination clauses in those interlocal agreements, then-incoming Interim County Administrator Jonathan Lewis explained, county staff would have to notify the cities no later than Dec. 1 if the board members expected they would not want to renew those agreements.

After the City of Sarasota received its letter, city Parks and Recreation Department Director Jerry Fogle told the City Commission this week, he and other staff members began working on the transition. 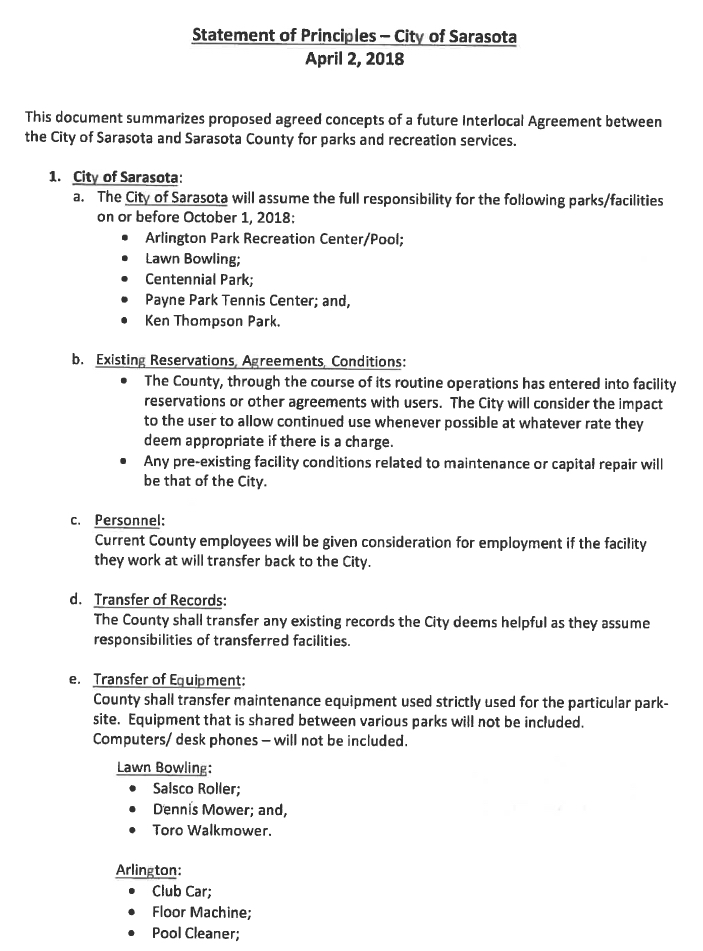 On April 2, the two groups finally agreed to a Statement of Principles, which summarized the proposed changes, Brown said. As a result, as of Oct. 1, the operations and maintenance of five city parks will return to the City of Sarasota: Arlington Park and Aquatic Center, Centennial Park, Ken Thompson Park, the Payne Park Tennis Center and the lawn bowling facilities on the Sarasota bayfront.

The county also is proposing the transfer to the city of equipment it has been using to maintain the five parks, such as a club car, mowers and pool cleaners, she noted.

As part of the agreement, the county will take over management of Lido Beach from the dune to the Gulf of Mexico, as well as North Lido Beach. Those facilities will be designated regional city parks. However, she added, the county will maintain an office/storage space within the Lido Pavilion complex for its lifeguards.

Brown noted that a private group has been working on a proposal for a long-term lease of the Lido Pavilion and Lido Pool. If that ultimately wins City Commission approval, she said, then the new interlocal agreement provides that the county will have approximately 1,200 square feet within a renovated Lido Pavilion complex for office and storage space, “based on the need.”

A provision in the new interlocal agreement also calls for either party to give notice no later than Dec. 1 of any given year if it wishes to terminate the agreement by Oct. 1 of the following year, Brown pointed out. In the event of early termination by the county, she continued, the county would provide annual installments to the city of $600,000 per year for up to three years, not to exceed $1.8 million.

Commissioner Paul Caragiulo thanked Brown and her staff “for all [their] work on this.”

Then he expressed concern about three lifeguards at the Arlington Park Aquatic Center who have been “long-time county employees.”

“For the record, I would hope that maybe our board could express some support here that the … city would consider strongly those individuals … coming into their employment,” Caragiulo said.
Those lifeguards know the pool’s users well, he added. Encouraging the city staff to hire them, Caragiulo said, would be “the least we could do.”

“We’ve had discussions with [city staff members]” about that, Brown replied. “They are open to that.”

She added, “We’re doing our best to place any individuals that may have an opportunity here in Sarasota County.”

Along with the three lifeguards at Arlington Park Aquatic Center, Brown noted, two other county employees who have worked “on the parks side” potentially could be hired by the city.

During a special City Commission budget meeting on July 9, Commissioner Shelli Freeland Eddie asked Fogle, director of the city’s Parks and Recreation Department, about staffing of the parks over which the city will assume management in the 2019 fiscal year.

Fogle pointed out that county staff had asked city staff to at least interview the individuals at those facilities who have not found other positions with the county, “and we will.”

“I hope that we would send a strong endorsement … that these folks are really good folks and have been working for us for a long time,” Caragiulo told Brown during the July 11 County Commission meeting.

Following those remarks, Commissioner Charles Hines made the motion to approve the new parks interlocal agreement with the City of Sarasota, and Commissioner Alan Maio seconded it. The motion won unanimous approval.