After work has been completed, report will be presented to the board

As Sarasota County Commissioner Alan Maio pointed out this week, Sept. 11 marked the first time in his nearly four years on the board that the commissioners had engaged in extensive discussion on a topic raised by a person during the Open to the Public portion of a meeting.

In this case, Commissioner Paul Caragiulo already had planned to raise points about the county’s policies regarding fertilizer, pesticides, herbicides and other substances that can feed red tide blooms. He had put that discussion on the Sept. 11 agenda under the board’s Reports Section. However, Sarasota resident Jen Palmer’s remarks at the start of the Sept. 11 meeting ended up moving the discussion to the first item of business.

“I can sense that the interest level with regard to a crisis is sort of dissipating already,” Caragiulo said, referring to the dissipation of red tide effects on the county’s shoreline over the past two weeks. “I think that’s exactly the wrong kind of thing,” he added of public concern.

He recently had talked with staff in the county’s Sustainability Program, which is part of the University of Florida/Institute of Food and Agricultural Sciences (UF/IFAS) Program, he said. His interest is in having the commission review all its policies regarding the flow of nutrients into the Gulf of Mexico, which can help fuel a red tide bloom, he added. He suggested including scientists from Mote Marine Laboratory in the process.

Another goal is to help people understand the connectivity of their actions, Caragiulo said. That would put them “in a position to make better choices.”

“Hopefully, the board will make [a review of its policies] a priority and integrate [that] with stormwater [initiatives] and everything else [that is relevant],” Caragiulo continued.

Caragiulo will be stepping down from the board in late November, having decided not to seek re-election.

After about 17 minutes of trading views on Sept. 11, the commissioners agreed, by consensus, to call for a staff report about the county’s current fertilizer and landscape management ordinance, as well as recommendations on new strategies. They asked County Administrator Jonathan Lewis to make sure that the information would be presented to them during an upcoming meeting. As Caragiulo noted, the routine advertisement of that agenda would enable interested persons to attend the session or watch it via live streaming or television.

During the Open to the Public period, Palmer focused on the flow of nutrients to the red tide bloom off the coast of Southwest Florida. (See the related article in this issue.) She told the board members she has lived in the county about five years.

Reducing stormwater runoff into the Gulf could lead to far less nutrients for the algae whose blooms have been plaguing the state, Palmer added.

She suggested several steps the county could take.

First, she said, the ban on use of fertilizer during the rainy season should include Roundup, a common weed-killer, and similar herbicides, which contain chemicals that feed algae blooms.

Second, she said, bans on fertilizer use during any time period “are useless if no one knows about them,” as she did not, she indicated, when she first moved to the county.

County ordinances prohibit the use of fertilizer containing nitrogen and phosphorus during the summer rainy season: June 1 through Sept. 30. For the rest of the year, those regulations call for at least 50% of the fertilizer used to be of the slow-release type.

“It’s imperative to educate the community about this topic,” Palmer told the commissioners. She suggested the distribution of flyers at public events, for example. County staff also should work to educate the public about environmentally friendly landscaping options, she said.

Further, enforcement of the ordinances is necessary, Palmer pointed out. 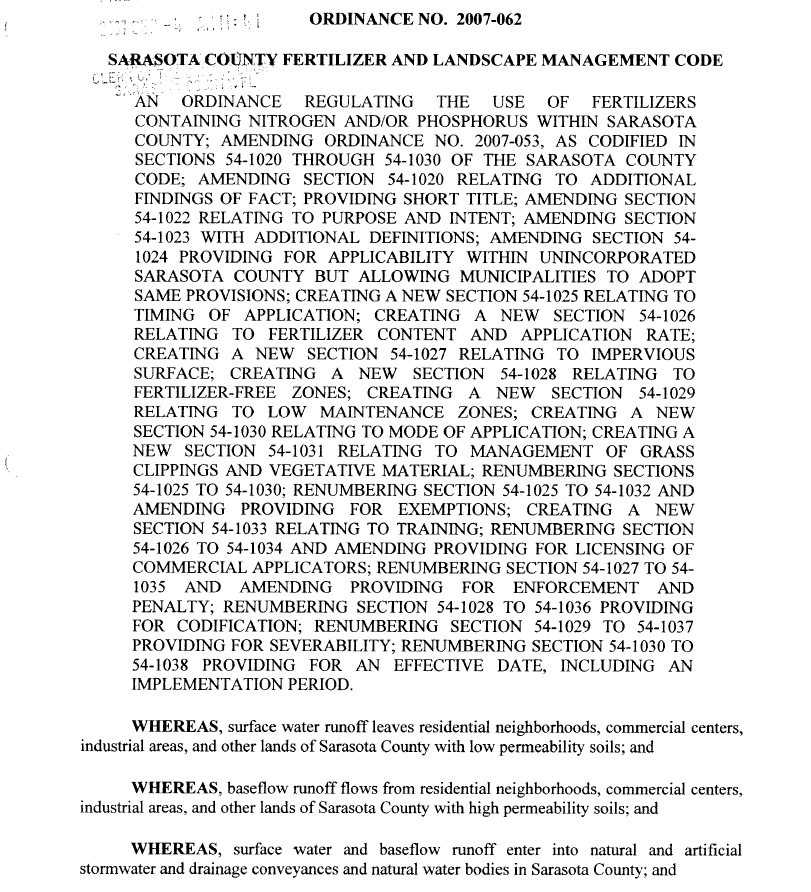 Finally, Palmer called for the commissioners to make it difficult for the public to purchase fertilizers and herbicides during the rainy season.

“Is this your first experience with red tide?” Chair Nancy Detert asked Palmer.

“No,” Palmer replied, but it is her first experience with such an intense red tide bloom.

“We’ve experienced this many times,” Detert told her.

“This year’s a little unusual,” Detert responded, “because those of us who have lived here for decade after decade … [have] seen [red tide] to this extent and for this prolonged time period.”

“We all have heard that this level of bloom is not unprecedented,” Caragiulo said. “I would agree that what is unprecedented is the economic impact that it has.”

Thirty years ago, he continued, a similar bloom would not have been as detrimental to businesses in the county.

Detert pointed out that she recently had reviewed the county’s red tide responses with County Administrator Lewis. “To the general public, it appears as if we’re doing nothing,” she added. A workshop, she noted, would be a good means of informing the public about all the initiatives county staff has been pursuing.

Lewis explained that staff has been providing information about the red tide response on a webpage that is accessible from the county’s website homepage, www.scgov.net. (The purple banner at the top has the links to the red tide information.)

Commissioner Hines thanked Caragiulo for raising the issues, concurring with the fact that the county has more year-round residents and visitors than it did in years past. “This is our economy; this is our quality of life. The water quality here is so important to what we do.”

“I just sit and shudder at what the [Tourist Development] tax is going to look like when the reports come in” for the months when the red tide bloom has driven tourists away from the county beaches, Commissioner Maio told his colleagues.

Business owners have reported a 60% downturn, he added. Hoteliers have been telling him, he continued, that even with the much improved situation over the past couple of weeks, they still are getting calls from potential customers worried that red tide really has not subsided off Sarasota County’s coast.

“I think it’s appropriate that we take a look at our fertilizer ordinance again,” Hines said. “Should it be expanded?”

Furthermore, Hines continued, area retailers need to be involved in the discussions. Hines said he does not know whether they take fertilizers off the shelves during the period the county ban is in effect. How do they prevent sales, he continued. “Who polices that?”
Hines did point out, “The county is doing millionsand millionsof dollars of stormwater runoff retrofits,” and it has been building sewer lines in the Phillippi Creek watershed for years, so aging septic tanks can be taken out of service.

“I think it’s tens and tens of millions of dollars,” Maio noted.

Regarding the Phillippi Creek initiative, Hines said, people need to be willing to make the switch from septic tanks to sewer hookups for the health of the environment. He noted “major pushback” from some homeowners, especially in south Venice and Englewood.

“Maybe we do need some sort of report, Madam Chair,” Maio told Detert.

Caragiulo then suggested that the board direct staff “to come up with a report” and suggestions about more steps the county could take.

“I see nodding heads,” Detert told County Administrator Lewis after looking at the other commissioners. “I would say we’re in agreement on that.”