The new chair of the board of directors of the Suncoast Aquatic Nature Center Associates (SANCA), which manages Sarasota County’s Nathan Benderson Park, came before the County Commission on May 17 with figurative hat in hand.

Ronald Shapo asked for a 10-year funding commitment, stressing that that would give SANCA better standing as it seeks private financial support for the park.

The county commissioners agreed unanimously to three years, on a motion by Commissioner Alan Maio, and emphasized to Shapo the need for SANCA to do a better job of marketing the park to the public. (Commissioner Nancy Detert was absent from the discussion and vote.)

Nicole Rissler, director of the county’s Parks, Recreation and Natural Resources Department (PRNR) told the commission during its May 17 budget workshop that her staff already had built into its Fiscal Year 2020 budget a request of $1,189,000 for SANCA. Rissler also explained that, after months of analysis, staff had determined that, based on SANCA’s budget for the current fiscal year, it would be more expensive for her staff to manage the park.

The SANCA FY19 budget, she noted, is $2,102,595. If PRNR employees were handling all the work, it would cost at least $2,304,689, Rissler said. That figure did not include expenses associated with events or the necessity of one-time payments for additional county vehicles for staff, she added.

Last year, the commission agreed to give SANCA $858,353 in additional funding for the 2019 fiscal year. During a June 20, 2018 budget workshop, they also suggested that their staff and SANCA representatives consider a host of possibilities for generating extra revenue — from T-shirt sales to charging more for parking during events to dining options.

On May 17, Shapo said the SANCA board members’ top commitment to the commission is to focus on marketing. They recognize, he continued, that the nonprofit has not done an adequate job of publicizing SANCA’s role with Benderson Park.

Moreover, Shapo told the commissioners, the SANCA board is committed to doing a better job of communicating with them.

Chair Charles Hines pointed out that he has stressed over the past year the need for SANCA to “take the time and educate our community” about why SANCA exists.

As he has spoken with legislators in Tallahassee, Hines continued, he has had to explain to them what SANCA does.

And although Shapo talked of the recent expansion of the SANCA board, Hines also suggested even greater local representation among the members. “We have the two premier rowing clubs in our community that are probably the envy of the entire country.”

As the first commissioner to respond to the SANCA funding request, Maio explained that he and his family “have an extreme fondness for Nathan Benderson Park.”

Maio related a couple of anecdotes to underscore that statement.

Then he was blunt with Shapo: “I’m not going to commit to 10 years. I think that our staff has already supported your first year,” Maio continued, referring to Rissler’s comment about the funding for 2020.

“I don’t feel comfortable to committing further boards to this,” Maio added, noting also that he was just re-elected in November 2018, so he would be on the board through November 2022 — unless, he joked, he drowned at Benderson Park.

Shapo said that the current contract between SANCA and the county already makes it clear that the county’s funding level for the nonprofit is tied to the availability of funds. He understood, Shapo said, that one commission cannot legally bind future commissions to funding commitments.

“What I’m proposing for my one vote,” Maio responded, “you take something less than 10 years,” perhaps three. “I think it would be better at that point to renegotiate. … You don’t want the public relations of us ending a contract with you. I offered the three years as a very amicable way to move this forward after expressing my love for Nathan Benderson Park, a love that not 100% of our citizens, as you know, have.”

“And I appreciate the three years,” Shapo said, though he added that he would toss out the idea of five years as a compromise.

Commissioner Michael Moran talked of the “very successful” public/private partnership between Sarasota County and SANCA. Still, Moran continued, “This is where we represent the taxpayer dollars.”

Commissioner Christian Ziegler concurred on the latter point, “We’ve got to be good stewards of the tax dollars.”

Moran told Shapo that he believes SANCA needs to work harder to realize the full potential of the 600-acre park. “This is a massive facility that needs to be maximized,” Moran said, calling for a faster pace for entrepreneurial sales and marketing efforts.

He asked Shapo if the SANCA board takes a monthly look at sales projections and revenue. What pressure is the board putting on staff in regard to improved sales and marketing, Moran asked.

“I think the pressure is being put on by ourselves,” Shapo replied, reprising his earlier comment that better marketing is the board’s top priority going forward.

Shapo then talked of his faith in the impact one new board member will have on the marketing initiatives. Shapo mentioned Randy Mallitz, president of the U.S. division and CEO of the Asia division of EAR Specialty Composites, which one of SANCA’s slides identified as a “global technology company.”

Shapo added, “I think he’s going to be an incredibleasset.”

Moran once again asked Shapo if the SANCA board members each month talk about revenue generation.

Shapo responded that they review and discuss their success — or lack thereof — every month in regard to fundraising and income-producing goals. “We will be doing that, I believe, at an increasing level.”

For example, Shapo continued, the Finish Tower on the property has been host to 250 events. “But there’s the potential to do many, many more.”

Past, present and future 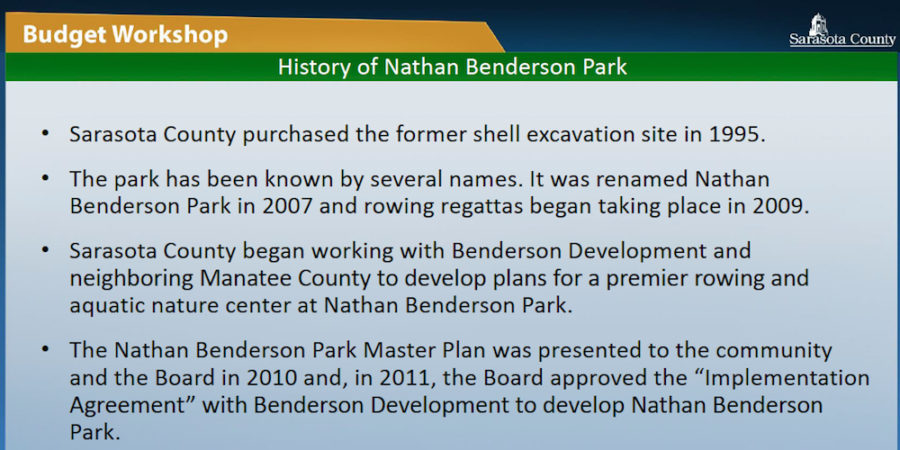 During her opening remarks on May 17, Rissler, the PRNR director, pointed out that numerous events do take place at Benderson Park each year. “We also look at this as a significant regional park for our system,” with “thousands of people very day” using it.

Shapo quickly put the focus on numbers. For the past five years, he said — from 2014 through 2018 — Visit Sarasota County has estimated that the total economic impact of the park on the county was $142,138,495. He stressed that that was an average of more than $28 million per year.

Stephen Rodriguez, president and CEO of SANCA, noted that, among upcoming event commitments, the Florida Scholastic Rowing Association plans to hold both its Sculling and Sweeps championships at the park through 2021. Each of those events, he said, brings in about 9,000 attendees.

Even more important, Rodriguez continued, the park will host the 2020 Olympic and Paralympic Rowing Trials. USRowing is in discussions with NBC about televising those competitions, Rodriguez added.

Moreover, “The National Rowing Foundation is prepared to commit to make Sarasota the home of the National Rowing Hall of Fame and Museum,” Rodriguez said. The permanent home for the memorabilia would be the Aquatic Nature Community Center, or boathouse. In the meantime, he noted, one floor of the Finish Tower would be dedicated to changing displays featuring items in the Hall of Fame’s collection.

(Later, Shapo framed the Hall of Fame discussion in a slightly different way, saying, “[It] is seriously considering coming here.”

Rodriguez noted, “Rowing [was] the first collegiate sport in the U.S.”

He also pointed to the board’s plans for the next major improvement to be the Aquatic Center, which generally has been referred to as the “boathouse.”

That facility was touted for years by Benderson Park representatives as the key means of making the park financially self-sustaining, as it not only would be a storage facility for rowing equipment for park users but also a place that could be rented for many types of functions.

The SANCA board has $4 million in commitments as matching funds for the project, Shapo told the commissioners.

Already, he continued, his board is searching for a full-time employee whose job it will be to raise private money for the park. Extensive public outreach will be needed, he said, to persuade regional and national companies of the benefit of being affiliated with the complex.

The county money the board was seeking for 10 additional years, he emphasized, would go only toward park maintenance and operations.

Shapo asked the commissioners to keep in mind “this was a borrow pit. It is nothing short of amazing” that it has undergone such a transformation, he added.

“I want this to be our Central Park,” Maio told Shapo as the discussion neared its end. He suggested Shapo and his colleagues on the SANCA board take the next three years of county funding support to achieve that vision. Then the commission could consider funding for the nonprofit for another five years, Maio said.