To build a new house on site of current lagoon-front structure, applicants also would need a variance, their attorney says

On a 3-2 vote, the Sarasota County Commission has approved a Coastal Setback Variance so owners of a home on Heron Lagoon in the Sanderling Club can demolish it and construct a new home on the Gulf of Mexico that will be 111.2 feet seaward of the county’s Gulf Beach Setback Line (GBSL).

Commissioner Michael Moran made the motion, with a second from Commissioner Alan Maio. Although Commissioner Paul Caragiulo asked several questions of William W. Merrill III of the Icard Merrill firm in Sarasota — the applicants’ representative — Caragiulo announced that he would join Moran and Maio in supporting the motion.

Chair Nancy Detert and Commissioner Charles Hines were in the minority. Since he first was elected to the board in 2012, Hines has held steadfast in opposing requests for residential construction seaward of the GBSL. County Environmental Permitting Division staff members have explained on many occasions that that line was implemented to preserve dunes and beach vegetation, which provide protection to landward property in the event of major storms, including hurricanes.

During the July 11 public hearing, Detert offered a variation on a view she has asserted many times since she was elected to the board in November 2016. “I really always hate to vote for a variance that puts you in front of the [GBSL], especially if you’ve owned the property for five years.”

Merrill noted in his presentation that the applicants for the variance, Todd and Sean Bavol-Montgomery, bought the property at 8445 Sanderling Road about five years ago.

Detert also pointed to “the fact that we have erosion now and we’re going to continue to have erosion.” She fears, she added, that, with board votes having allowed construction closer to the Gulf of Mexico in recent years, people “will show up in this very room, screaming that they need beach renourishment. … You’re really flirting with Mother Nature, and this isn’t a small variance. This is 111 feet seaward of the [GBSL].”

Yet, Merrill said during his presentation, “Without the variance, it is unreasonable to require the petitioner to continue using a very small, [1,128]-square-foot, noncompliant, on-grade, built-in-1953 residence” that violates the modern county zoning code setback lines and “overhangs the Mean High Water Line of Heron Lagoon.” Merrill called the latter situation “very unusual. … It would not be allowed today in Sarasota County.”

“It would also be an unreasonable hardship to require all construction [at 8445 Sanderling Road to be] landward of the Gulf Beach Setback Line,” Merrill said, because the new residence would be “landward of all other homes in Sanderling Club.”

Caragiulo noted the “50% Rule” of the Federal Emergency Management Agency (FEMA), which says that if the owner of property in a flood zone wants to spend more than 50% of the value of that property to improve it, the owner must bring the structure up to the current building code standards for property in that flood zone.

“If your clients wanted to take the entire [lagoon] house down and rebuild another home,” Caragiulo asked Merrill, “they wouldn’t be able to do that?”

Merrill responded that the on-grade foundation would not support a new structure in the very same footprint that would comply with the current FEMA guidelines. If the petitioners had to adhere to all the current county and Sanderling Club setback restrictions — without seeking a variance — Merrill pointed out that the only area left for them to build on would be an “irregular-shaped lot” comprising 1,138 square feet.

In making the motion, Moran said, “I think it’s a reasonable, commonsense request, given the contour of [Sanderling Road in the immediate area] and the placement of that residence.”

Part of the plan entails a realignment of a portion of Sanderling Road, which bisects the Bavol-Montgomery property, “splitting it into about equal gulf-front and bay-front areas (each about 12,819 [square feet]),” a July 11 staff memo explained.

The petitioners will pay for the relocation of the segment of road on their property and partly on the property owned by Robert Roggio at 8440 Sanderling Road, Merrill said. They also will bear the expense of upgraded county utilities that run along that portion of the road, he noted. He and his clients have worked closely with Spencer Anderson, director of the county’s Public Works Department, on that aspect of the project, Merrill added; the project will not disrupt utility service.

One factor that Maio noted in offering his support of the project was testimony from Roggio.

Roggio explained to the commissioners that he has been head of the Sanderling Club’s Building Committee for the past 20 years. When the previous owner of the petitioners’ property was preparing to put it on the market, Roggio said, she conferred with him, because she wanted to be able to tell a potential purchaser that a new house could be constructed on the Gulf of Mexico side of the property. She worked with him and an architect on a tentative proposal very similar to the design of the new house that the applicants have proposed, Roggio added. “She was able to say, ‘This is what you can do.’”

The property owners “had an expectation after submitting plans” to the Sanderling Club for their house on the Gulf, Maio told his colleagues. “Did they check that clearly enough? I don’t know.”

Nonetheless, Maio continued, Merrill had illustrated that the new house would be in alignment with almost all the other residences in Sanderling Club, which are seaward of the GBSL. “To stop this,” Maio said, “I’m not sure of exactly what we’re accomplishing. … I do believe that horse is out of the barn.”

However, during the public hearing, Nancy Cason, an attorney with the Syprett Meshad firm in Sarasota, asked, “When was the last time the commission allowed someone to move their … residence that they have reasonable use of over 100 feet seaward?”

She noted that she was speaking on behalf of Jeffrey Roberti, who owns the adjacent Gulf-front property at 8448 Sanderling Road.

The petitioners, she pointed out, are “seeking to demolish a gorgeous dream home/lagoon residence and build a mansion on the beach.”

Cason stressed to the commissioners that the Bavol-Montgomery property has “direct access to the beach,” with a picnic area and a recreational area on the Gulf. “They have a private beach in their front yard,” she said.

Cason was one of four people who testified against the proposed project, including James Toale of Sarasota, an attorney representing Sanderling Road property Keith Monda.

In his rebuttal, Merrill showed the commissioners an aerial photo illustrating that his clients’ house will be more landward and smaller than the Roberti residence. His clients plan a house with a footprint of 3,082 square feet; it will be two stories over parking, he pointed out, comprising 3,950 square feet.

Yet another aspect of his clients’ plan, Merrill explained to the board, will be the removal of what he characterized as “a massive forest of Australian pines” on the Gulf side of the property, where the new residence will stand. Those trees, he added, are “slowly overtaking that area [and] eating away at the remaining dune.” 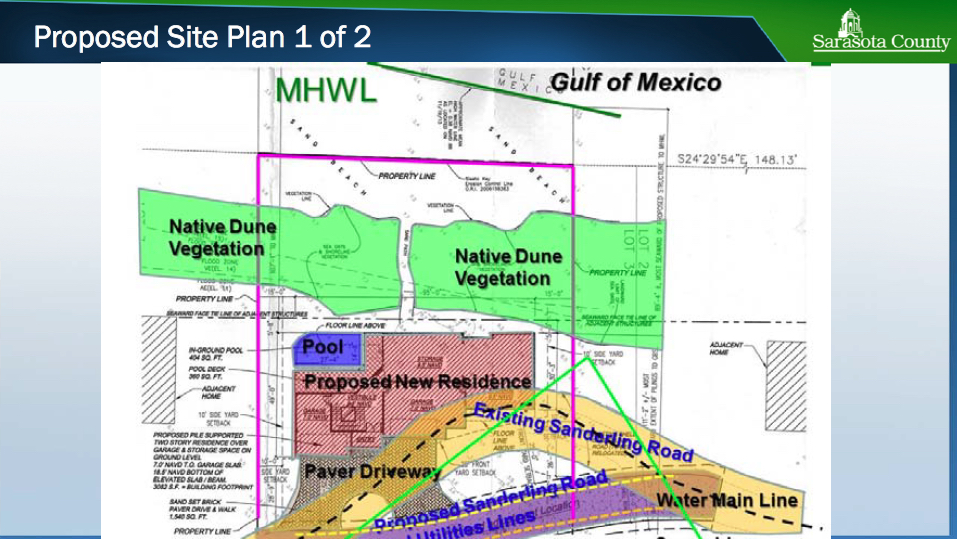 Further, Merrill noted, all the pine needles on the ground will be removed by hand. He called those needles “remarkably plentiful and very toxic,” just as the pines’ root systems are, he added. The pines also encourage erosion and prevent the nesting of sea turtles, Merrill noted.

His clients will pay for the planting of new native vegetation, he said.

The construction would not adversely affect the coastal systems, Merrill stressed, which Lin of the county staff also pointed out.

With a pool, pool deck, driveway and pavers, the total impervious area of the Bavol-Montgomery project will be 5,431 square feet, Weiqi Lin of the county’s Environmental Permitting Division told the commissioners. The latter construction would be seaward of the GBSL, Lin said. However, the lot coverage would be only 22%, which is below the 50% maximum allowed in Siesta Key’s zoning regulations, he added.

As for the road relocation: Lin explained that about 4,100 square feet of it is on the petitioners’ property. “The existing road is kind of irregular.”

To provide for the construction of the new house, he noted, the plan calls for shifting part of the road 37 feet to the east; the road’s footprint would be reduced from 4,107 square feet to 3,365 square feet across the 8445 Sanderling Road property, Lin said.

Another segment of the relocated road will extend 45 feet to the north onto Robert Roggio’s property at 8440 Sanderling Road, Lin pointed out.

During his presentation, Lin explained, “This variance petition is very unique.” He showed the board slides of the existing house on Heron Lagoon, the road and the Gulf-front portion of the property.

The beach, he pointed out, “used to be critically eroded.” However, in 2007, the county undertook an initial nourishment project and then followed that up with a placement of sand in 2016. As a result, maps show a South Siesta Erosion Control Line (SSECL), Lin said. All of the beach seaward of that line “belongs to the public,” he added

“It is clear to see it is a much wider beach,” since 2016, he continued, and that “dune vegetation is starting to colonize …”

Lin further explained that about 90% of the property at 8445 Sanderling Road is seaward of the GBSL.

As for the part of Sanderling Road that is involved in the petition, Lin noted that it is constructed of shell; the elevation of the entire Sanderling Road ranges from 2.7 feet NAVD to 4 feet NAVD. (“NAVD” is a standard used to refer to height above ground level.)

“That elevation is low in this area,” Lin continued, “so under extreme weather conditions, a flooding concern could be a reasonable assumption for both the existing and the proposed road.”