Sarasota County commissioners already had put themselves on the record in opposition to a section of the County Code that affects private property rights.

On March 9, they affirmed their views, following the lead of six speakers who addressed them during the Open to the Public period for comments at the start of their regular meeting that day.

The commissioners later took less than 10 minutes to approve the scheduling of a public hearing to eliminate language in Section 94-85 of the County Code that allows as few as 20 registered voters to initiate a public amendment to that plan.

Ultimately, the commissioners agreed unanimously that they could not allow the club members to have any say on property that none of them owns or even lives next to.

In response to a March 9 question from Chair Alan Maio, Deputy County Attorney Joshua Moye said he did not believe staff had determined yet when the hearing would be conducted on modifying the language of Section 94-85.

During the public comments period, Robert “Bo” Medred, president of Genesis Planning and Development in Bradenton, pointed out that he started out his career as a planner with the county. That was 39 years ago, he noted. Over the past 35 years, he continued, he has worked in the private sector. “Whenever I submit any request to the County Commission for [any land-use change],” Medred said, “I am required to submit an owner affidavit,” which the property owner signs. It “is mandatory by your staff at the time of filing,” he stressed.

When he discovered Section 95-84 of the County Code, he added, “It caused me great pause … [That language] could be ripe and susceptible for misuse and abuse.”
Medred also noted, “I realize that the county staff time in any special studies, all advertising and the administrative costs associated with this type of Comp Plan initiative would be borne entirely by the taxpayers of Sarasota County and at no cost to the 20 or so registered voters that initiated it.

“That may be reasonable to some,” Medred continued, but his clients, with privately initiated proposals, “are required to submit a billable fee form” showing that they will bear all the costs, not the taxpayers.

He urged the commissioners to eliminate the language from the County Code.

The second speaker, Glenn Peachey of Myakka City, likened the effects of Section 94-85 to “a frivolous lawsuit. It doesn’t cost the individual suing anything, but it costs individuals being sued a lot of money that they do not necessarily have, to prove their innocence.”

Peachey is one of the property owners in the Fruitville/Verna roads area who was affected by the Miakka Community Club initiative that began in 2019.

David Langhout, vice president of the Kolter Group, told the board members, “We ask you … is there anything more fundamentally dangerous” than to enable 20 people to determine “what any other landowner can or cannot do with its property?”

Matthew Brockway, a land-use attorney with the Icard Merrill firm in Sarasota, emphasized that the section of the code enables “competing, contradictory and even retaliatory Comprehensive Plan amendments.” He described the results as “chaotic planning.”

People have complained that deleting the language from the County Code would impede public engagement in land-use issues, Brockway continued, but that is not true. “There’s already built in a robust process for citizen input for all Comprehensive Plan amendments.”

One opponent of the proposed change in the County Code is Becky Ayech, president of the Miakka Community Club.

In a Feb. 26 email to Chair Maio, Ayech wrote, “While the County may want to add additional qualifiers, I hope they will not eliminate the right of citizens to petition their government, through a formal process, to initiate comprehensive plan amendments while granting rights to corporations and non residents to request comprehensive plan changes when they either are not property owners or residents …”

Even if citizens petition for an amendment, Ayech continued, the Planning Commission and the County Commission must approve the request to initiate the process, which still would entail public hearings. “Non property owners, non residents and corporations just pay a fee and get to have an amendment be processed,” she pointed out, adding, “This does seem rather discriminatory.”

Another opponent of the proposed deletion of the language in the County Code is the Siesta Key Association. President Catherine Luckner sent an email to the commissioners on March 8, contending, “We are not aware of any abuses or overuse of this right to be part of Comp Plan Amendments.”

Moreover, Luckner wrote, “Investors with significant financial resources make it a mountain climb to maintain our own homes here.”

She also noted that she was aware of only one time that a group has used Section 95-84, referring to the Miakka Community Club.

The commissioners reiterate their concerns

During the formal staff presentation on the issue on March 9, Michele Norton, manager of the county’s Planning and Zoning Division, explained that staff members had spoken with representatives of other jurisdictions or reviewed their policies and had not found language comparable to Section 94-85 of the Sarasota County Code.

The standard, she added, is that “private requests remain private, and [future land-use] map amendments are typically [those] of the property owner or agent.”

Additionally, the March 9 staff memo on the topic, provided to the commissioners in advance of the meeting, noted, “From a process standpoint, Comprehensive Plan amendments can be complex. To perform a proper review for amendments that impact particular property(ies), specific information such as property information, identification of natural resources/features, availability of and demand for public facilities and services and impacts, transportation analysis, historic resources, fiscal analysis, and public workshops would all be needed.”

The memo added, “The burden of proof for justifying a proposed amendment rests with the applicant who must demonstrate how the request is consistent with the required County criteria. Under Section 94-85 (a) this [burden] would then [shift] to staff for a proposal that was not generated by the Board, staff, or the affected property owner.”

“In your research, since no other counties have this, what inspired us to have this, because it is really rather unique,” Commissioner Nancy Detert asked, referring to the clause in the County Code. 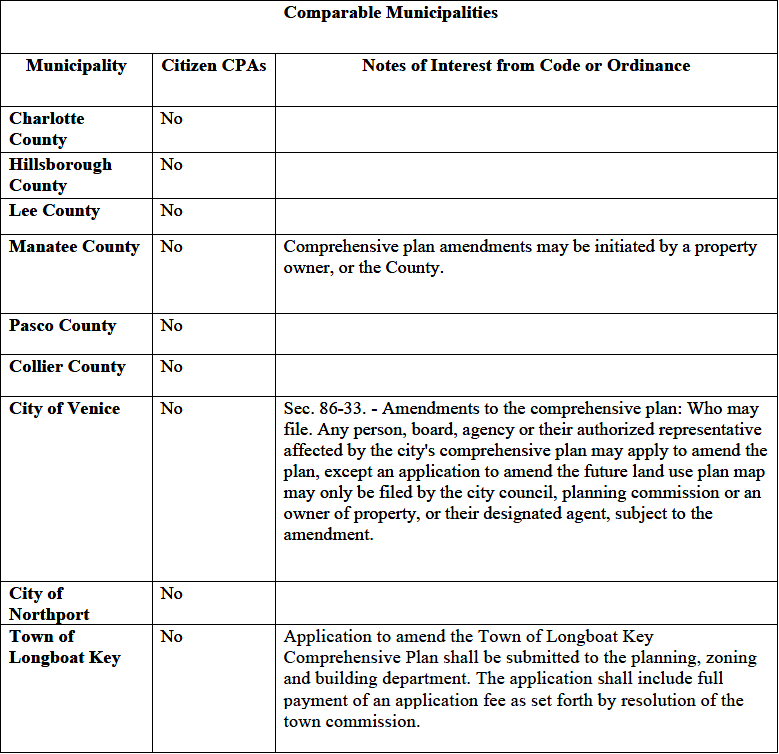 “Staff did attempt to look at the history,” Norton replied. “We did not find any impetus for it. … I don’t have an answer to that question.”

Detert pointed out that the county’s Planning Commission last year brought to the County Commission’s attention its concerns about the potential of Section 95-84 to affect private property rights. “What bothers me,” Detert added, “is that [the public petitioners] don’t even have to be contiguous to the property.” In other words, Detert continued, a group of individuals in Venice could use the county policy to try to change the future use of North Sarasota County land.

When Chair Maio asked for a motion after the discussion, Commissioner Michael Moran made it, calling for the scheduling of the public hearing to amend Section 95-84. Commissioner Ron Cutsinger seconded the motion.

“This goes to the heart of a property rights issue,” Moran pointed out. The ability to alter the rights of a property owner, he added, “should have an extremely high threshold, even for the government.”

Commissioner Christian Ziegler also voiced his support for eliminating the language in the County Code. Even though he voted in 2019 to allow county staff to process the Miakka Community Club members’ proposed publicly initiated Comprehensive Plan amendment, he said, “I made it very clear to [the club members] that I did not agree with what they were trying to do, and I do not think that anyone should have their property at risk from someone else that does not have a stake in that property.”

“I think most people would be shocked that 20 of their fellow citizens could rezone their property without their permission,” Detert pointed out. “It is kind of un-American.”

She also referenced attorney Brockway’s comments, noting, “People do have the right to influence our decision making when it comes to land use issues.”

Maio added, “This is the only instance I’ve seen in … 51 years of dealing with real estate for myself and for my firms … that someone other than the current property owner” can affect the future use of a piece of property.