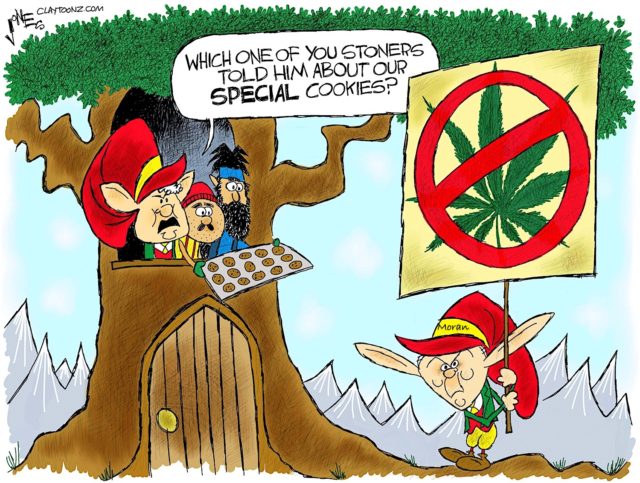 There is considerable buzz developing over a pending announcement by the Evolution Is A Theory Society (a wholly owned subsidiary of Screwball Suppositions, Ltd.). It seems that the nominations for the annual Chicken Little Awards will soon be made known, and rumor has it that a local dignitary will be a nominee.

Sarasota County Commissioner Mike Moran has caught the attention of the Chicken Little Nominating Committee for his bold, hysterical concerns about marijuana in Sarasota County.

He has heretofore opposed any medical marijuana dispensaries in Sarasota County because he believes they are a stalking-horse for (gasp!) recreational marijuana stores.

Never mind that more than seven out of 10 Florida voters wanted medical marijuana in a plebiscite in 2016. Never mind that the state has done everything in its power to unconstitutionally obstruct that edict of the citizenry. And never mind that, given the fellow traveler sympathies of the Legislature with Moran’s anti-marijuana delirium, it will take another constitutional amendment to legalize recreational marijuana. Moran is in full “Reefer Madness” mode.

So it should have come as no surprise when he asked his fellow commissioners to support his request to have the county attorney draft a proposed ordinance that would outlaw recreational marijuana in Sarasota County.

It is this unhinged apoplexy whenever Commissioner Moran contemplates the good people of Sarasota County toking up in their living rooms that has drawn the prospective approbation of the Chicken Little Nominating Committee. While no official announcement has been made, an anonymous source close to the committee has confirmed it is almost certain Moran will snag one of the coveted nominations.

The County Commission has several crises that merit its attention: a dwindling Economic Stabilization Reserve, in the face of feckless resistance by the commissioners to increasing property taxes even a tiny amount; a drought of affordable housing for middle class workers in the county; and the relentless campaign by developers to destroy any remaining framework of protections preserving our environment, so that they can willy-nilly build their housing developments and shopping centers. It therefore is surprising that our commissioners would choose instead to focus their attention on banning something that does not exist.

If one did not know better, one would swear they were all stoned.

LETTERS TO THE EDITOR: The Sarasota News Leader welcomes letters to the editor from its readers. Letters should be no more than 300 words in length and include the name, street address and phone number of the sender (although only the name and city of residence will be shown in the publication). Letters should be emailed to Letters@SarasotaNewsLeader.com, with “Letter to the Editor” in the subject line. Letters actually printed will be based on space available, subject matter and other factors. We reserve the right to edit any letters submitted for length, grammar, spelling, etc. All letters submitted become the property of The Sarasota News Leader.