In the wake of the devastation of the most recent red tide bloom, the Sarasota County commissioners have put a focus on a variety of water quality issues. Most recently, Chair Charles Hines won his colleagues’ support for more detailed reports following “No Swim” advisories at county beaches.

In response, the county’s Health and Human Services Department provided a detailed report on Oct. 7 to County Administrator Jonathan Lewis, who passed it along to the commissioners, as noted on a copy of the document provided to The Sarasota News Leader. That report offers statistics showing that, in fact, “No Swim” advisories have been rare in the county over the past 10 years, even during the last major red tide bloom, which subsided in February.

The report addresses the wide variety of water sampling and monitoring that occurs in the county on a routine basis — and it includes information about how results are made available to the public.

During remarks as part of the Sept. 24 regular commission meeting, Hines pointed out, “We keep getting reports from the Health Department” about the need for people to stay out of the Gulf of Mexico during periods when pollution is at high levels.

What he has found missing from those reports, Hines continued, is documentation about the exact cause of each problem and a follow-up about how best to address the issue. As Hines put it, what he wanted was something to the effect of, “‘Here’s what caused [the pollution], in our opinion, and our recommendation on what [the commissioners] should do, so it doesn’t keep happening.’”

Hines added, “There’s not that information coming from staff or anybody.”

Hines said he could understand, for example, if the defecation of a multitude of seagulls under the Venice Pier leads to high bacteria levels in the water, making it risky for swimming. “It’s natural,” he added of such a situation produced by wildlife.

If human waste is identified as the source of pollution, Hines continued, the commission needs to know where that originated, as well as options for preventing repeat problems.

He acknowledged that the commission in the past has not requested details about the “No Swim” advisories. However, he added, “I’ve consistently said that we need information to make policy decisions and budget decisions. … Plus, every time a beach gets closed, it’s horrible publicity, and we don’t know why [the closure was necessary].”

“Hopefully, we’ll get some information,” he continued, so the commissioners can discuss the issue at length during their annual retreat in December, when they will plan on priorities for 2020.

“I couldn’t agree more,” Commissioner Christian Ziegler responded. “You’ve touched on something that’s frustrated me in the past.”

Ziegler concurred with Hines that “these beach closings really hurt us.”

He thanked Hines for bringing up the issue.

Then Hines told County Administrator Lewis, “The more information we have, the better off we are in making policy decisions.”

Two days after Hines made his remarks, the Florida Department of Health in Sarasota County issued another “No Swim” advisory; this one, for Brohard Beach.

As is typical in such announcements, the Health Department alert said, “The amount of enterococcus bacteria found during routine weekly water quality testing … [was] outside acceptable limits.”

The advisory also pointed out that the beach itself remained open to the public. Representatives of the Health Department have emphasized that the advisories are not “beach closings.” They alert people that “wading, swimming and water recreation is not recommended as long as there is an advisory in place,” as the Brohard Beach announcement stated it.

The advisories also typically include this information: “Some bacteria are naturally present in the environment. The Environmental Protection Agency (EPA) has found a link between human health and water quality. Signage advising the public not to swim or engage in water recreation will stay in place until follow-up water testing results meet the EPA’s recreational water quality standard.”

In the Brohard Beach case, the announcement also said, “No sewage spills have been reported within one mile of the posted beach in the past two weeks.”

However, the advisory included this paragraph: “The rapid response team from Sarasota County and the City of Venice has determined the cause of the elevated bacteria levels is likely due to natural sources. The team observed a wrack line of decaying algae along the shoreline. Wrack lines, which provide food for shorebirds and wildlife, act as natural bacteria reservoirs. Additionally, recent rainfall in the area washing accumulated pollutants, including bacteria from birds, pet feces, and wildlife into local waters may also be a contributing factor.”

Brohard Beach, which is located at 1900 Harbor Drive S. in Venice, allows dogs — one of the few “paw parks” in the county.

On Sept. 27, the advisory was lifted. That announcement included the following information, mirroring the public service efforts the Health Department staff takes with its follow-up reports:

“The Florida Department of Health in Sarasota County monitors water quality weekly at 16 sites along Sarasota’s 34 miles of beaches. The intent of this program is to provide county residents and visitors with accurate, up-to-date information on the water quality at our beaches.

“When making beach day plans, be sure to check the latest reports on beach conditions. Click here for beach water testing results.

“For more information” the advisories suggest the following:

“Call 941-BEACHES (941-232-2437) or visit www.visitbeaches.org. Click on the same link to the mobile-friendly version of the beach conditions report.

“Visit Sarasota County also provides extensive information about Sarasota, including its beaches. The website is www.visitsarasota.org.” 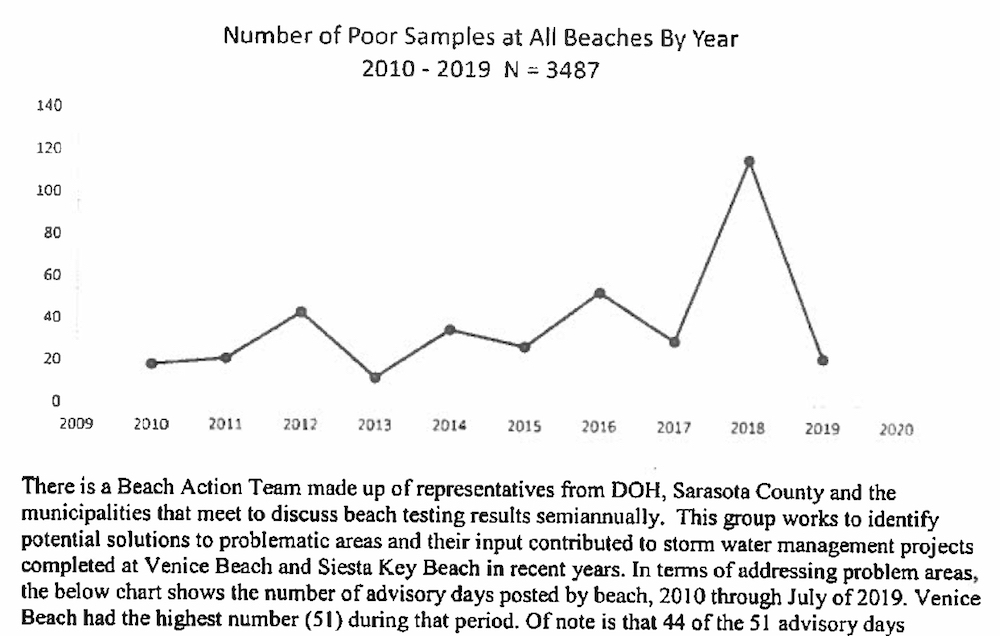 In the Oct. 7 report issued in response to the commissioners’ concerns, Chuck Henry, director of the county’s Health and Human Services Department, explained, “The Florida Healthy Beaches Program was established in August 2000.” Its goal, he added, “is to protect the public’s health by monitoring water quality of Sarasota County beaches.”

The water samples collected on a regular basis, Henry continued, are “analyzed for Enterococci bacteria (typically found in the gut of warm-blooded animals). Enterococci are enteric bacteria that inhabit the intestinal tract of humans and animals. The presence of enteric bacteria is an indication of fecal pollution, which may come from [stormwater] runoff, pets and wildlife, and human sewage.”

Additionally, Henry pointed out, “water quality programs are … in place to collect information from our bays, creeks, major stormwater facilities, and rainfall and water levels.”

Henry explained that whenever a water sample from any of the county’s 16 designated beach locations shows bacterial levels are a risk to the public, utility departments serving areas within 1 mile of the affected location are notified, so they can advise the Florida Department of Health in Sarasota County “of any known sewage spills or potential known causes in the area.”

He added, “Most of our advisories occur after heavy rains,” which is an indication that many of the incidents are related to stormwater and other runoff. “Technology exists to identify sources of bacteria such as bird, dog, cow, raccoon or human,” Henry pointed out. “However, this testing is expensive and has not been helpful in identifying point sources.”

A 10-year “look back at data from our Sarasota Beach locations,” he continued, indicates that, in a typical year, about 3.75% of beach water samples — out of an average of 800 — exceed health standards, necessitating advisories.

However, he noted, in 2018, “along with the severe Red Tide, we experienced a record number” of times bacteria levels exceeded the recommended threshold — 116 out of 925 samples, or 12.5%. “It is suggested that the increased amount of organic material that resulted from fish kills contributed to increased levels of bacteria,” he added.

Altogether, Henry pointed out, “[T]he waters in question are risk-free (from a bacteriology standpoint) 96+% of the time in all the previous years and 81+% of the time even during the year of the worst Red Tide event.”

As for bay and creek monitoring: Henry noted that results of those efforts “are presented on the Sarasota Water Atlas website,” partly in a format that resembles a report card. Further, he wrote, the data collected is provided to the Florida Department of Environmental Protection (FDEP) so it can assess compliance with Florida water quality standards, as provided in the Florida Administrative Code. “The FDEP assesses compliance on a five-year rotating basis and adopts lists of verified impaired (polluted) waters.”

In regard to stormwater, Henry pointed out that water quality parameters are checked at major facilities in the county, such as the Siesta Beach Treatment Facility and the Celery Fields Regional Stormwater Facility. Testing shows levels of nutrients and bacteria, Henry added. “If criteria are not within required specifications,” he continued, then persons handling the operations of those facilities evaluate the situation and implement “retrofits or necessary maintenance to improve conditions.”

In his conclusion, Henry wrote, staff from the Department of Health and the county’s Public Utilities and Public Works departments “will continue conducting water quality monitoring to identify and reduce or eliminate surface water impacts. Furthermore, staff will continue to develop and implement long-term plans to improve wastewater and stormwater infrastructure, and support opportunities for septic-to-sewer projects in coastal areas.”