Although Sarasota City Commissioner Hagen Brody said he concurred with Mayor Erik Arroyo in supporting a strong mayor for the city, Brody also made it clear during a special meeting on March 28 that he understands that the majority of city residents oppose that form of government.

Therefore, Brody joined Vice Mayor Kyle Battie and Commissioners Liz Alpert and Jen Ahearn-Koch in supporting a motion made by Ahearn-Koch to keep the city’s form of government as is.

On a second vote this week, the commissioners did approve a November General Election referendum on raising their salaries. Initially — if approved by the voters — a board member’s pay would go up to $44,250 a year, instead of the $28,149.58 the members have been receiving.

During the discussion, Arroyo emphasized the lack of consistency in the mayor’s position, with city commissioners electing the mayor each year from among themselves, generally on a rotating basis.

Arroyo also stressed that the interest in modifying the form of government did not reflect on the three city Charter officials who serve at the commission’s pleasure: City Manager Marlon Brown, City Auditor and Clerk Shayla Griggs and City Attorney Robert Fournier. “This is for going down the road … How do we want the city being run?”

Vice Mayor Kyle Battie acknowledged that part of the platform on which he ran in 2020 called for a strong mayor form of city government. However, since then, he continued, he had changed his position. “I like the composition, you know, of our commission [and the three Charter officials] as it stands. … I’ve heard from others that they like that, too.”

The discussion and vote came as the board members considered a number of recommendations that the citizens they appointed to a Charter Review Committee had presented to them on March 7, following months of meetings and debate.

Although few members of the public were present for the start of the special meeting this week — which began at 9 a.m. — of the six who did address the board on the topic, only one — Diana Hamilton — advocated for the Charter Review Committee recommendation. In fact, Hamilton pointed out that she was the person who proposed the four-district election system.

“District 1 is far less Black voters than it was before,” Hamilton emphasized. “Far less,” she added, thanks to its inclusion of the growing Rosemary District.

“There are neighborhoods in this town that are so severely underserved — it’s shameful,” Hamilton told the commissioners.

Two other speakers — Cathy Antunes, who served on the Charter Review Committee, and businessman Martin Hyde — questioned whether an African American ever again would be able to serve as mayor, if all city voters were able to cast ballots for candidates for that position. “We’ve never elected an African American at-large,” Hyde pointed out.

“I think it’s really important,” Antunes said of that factor, noting that she had brought it up during the committee’s discussions.

Additionally, a third speaker, Norm Dumaine, raised the concern that strong mayors have been the focus in other cities of “instances of abuse of power, of greed, of back-door dealings. … I would hope our city doesn’t go down that road.”

Following the public remarks, Commissioner Brody said, “This whole idea of this scary thing about corruption … That can happen with any form of government. I think that’s used as some kind of fear tactic to scare people into not considering a strong mayor.”

As for diversity: Brody continued, “In my mind, we’re past that. That was the whole reason for changing the election date.”

He was referring to the city Charter amendment that voters approved in November 2018, which moved the city elections from a March/May timeline to an August/November timeline. Proponents of the measure contended that few city residents voted in the spring elections, so holding those elections in conjunction with other local and statewide races would produce stronger voter turnout.

Brody contended that the diversity issue was being used as a “fear tactic,” as well.

The commission will change in November of this year, he added. Five years ago, Brody pointed out, the commission was different. “You would hardly recognize any faces up here,” except for those of Commissioner Alpert and City Attorney Fournier, he said.

Commissioner Ahearn-Koch laughed. “We were here five years ago,” she told Brody. Both were elected at-large in May 2017.

In making the motion to keep the form of government as is, Ahearn-Koch stressed, “Diversity is very important. … I think we have to be very active and very vigilant in making sure that we do have a diverse commission.”

Although proposals for a switch to a strong-mayor form of government seem to arise approximately every six years, she added, “The community’s rejected it over and over and over again.”

In commenting on Battie’s change of mind on the issue, Commissioner Alpert pointed out, “I think there is actually merit in one’s changing their position after learning new information. That’s called growth …”

Referencing comments that Hyde and Antunes made that morning, Battie said he would like to think that an African American could be elected to the commission at-large. However, he continued, “The world we live in — the world I live in — you know, I don’t know.”

Mayor Arroyo said he believed in allowing the voters to have the opportunity to decide on the form of government, noting that a vote to accept the Charter Review Committee recommendation would mean that the decision would be in the form of a question on the Nov. 8 General Election ballot.

The Charter Review Committee members agreed to recommend that the board members receive $40,000 a year, with a 2% annual increase “based on the original principal and accumulated prior increases.”

“I think we make less than just about everybody in the area,” Commissioner Alpert said. Having tracked the hours she spends on City Commission business, she continued, she had found her average to be 30 to 40 hours a week. “It’s not a part-time job anymore.”

Alpert proposed that the commissioners put on the November General Election ballot the provision that the pay would be 100% of what county commissioners make in a county with a population the size of the city.

“I’d like for us to consider a decrease in salary,” Mayor Arroyo suggested. For example, he said, commissioners in the City of Miami, which has a much larger population than the City of Sarasota, make $9,000 a year, based on a 2018 document he had reviewed. 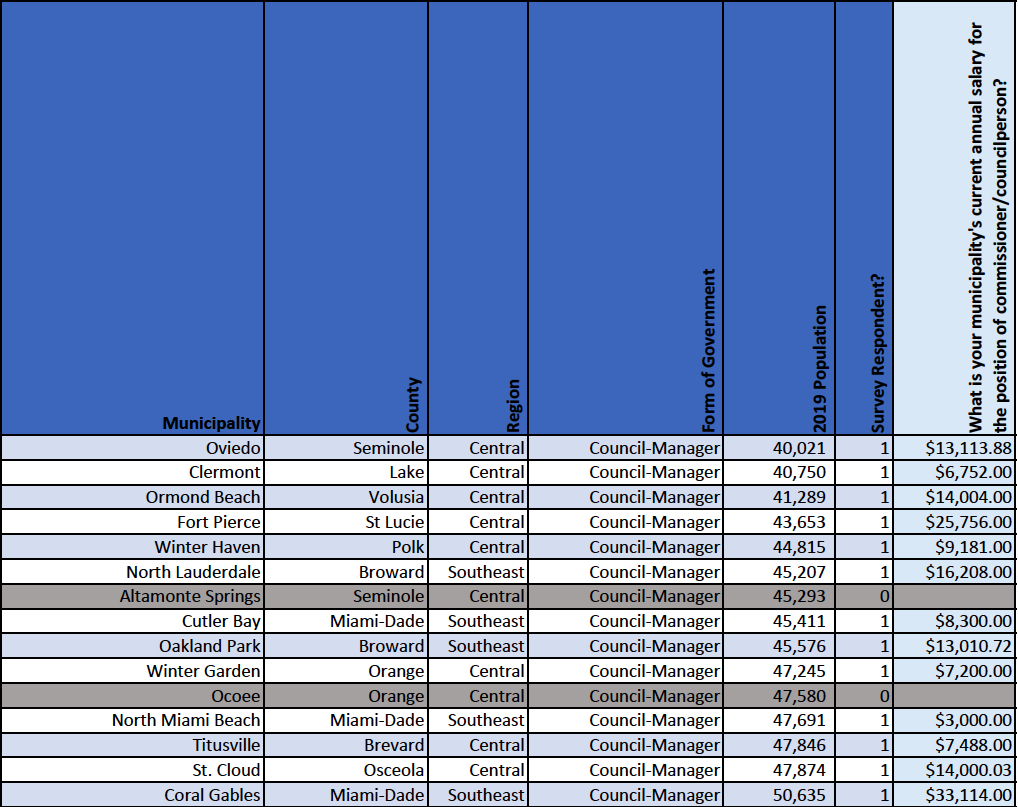 Service on the board, Arroyo said, “should be a civic duty.”

“Most people have no idea what we do … and what goes on,”

Alpert countered. “I don’t think any of us do it for the money,” she continued. Nonetheless, without sufficient compensation, Alpert said, only people who are independently wealthy can afford to serve on the City Commission.

Moreover, she pointed out, no matter what the commissioners agreed to that morning, the question would go before the voters.

Charter Review Committee member Antunes told the board members, “I think that there was unanimity among us that you all deserve a raise.” In fact, she added, “I think a lot of us were quite surprised at how little you make … You shouldn’t have to be rich to serve on the City Commission. I think that that shrinks the pool of people who would consider doing it.”

(During their Jan. 10 meeting, the Charter Review Committee members took a final vote on the compensation issue. It passed 8-1, with Chair Carolyn Mason in the minority. Antunes was not present at that meeting. The initial discussion and vote occurred on Dec. 13, 2021. However, City Auditor and Clerk Griggs brought up the issue again on Jan. 10 because of confusion that ultimately had arisen about calculating the 2% annual increase.)

Referencing Alpert’s remarks on March 28, Vice Mayor Battie said he could not begin to add up all the time he spends on city issues, noting that he works every day.

As for Arroyo’s recommendation about lowering the pay: “Hell, no, I wouldn’t do it. … We put in too much time [making decisions] that affect the quality of life of every individual in this city.”

Ahearn-Koch concurred with Alpert that adjusting the compensation formula would be the best option.

“It is easier and cleaner for me to do it, if you all just change the multiplier,” City Auditor and Clerk Griggs told the commissioners.

Alpert made the motion to put on the November ballot a call for changing the formula from 66.7% to 100% of the compensation of a county commissioner in a county with a population the size of the City of Sarasota, and Battie seconded it.

Arroyo and Commissioner Brody voted “No.”

In regard to two other Charter Review Committee recommendations, Commissioner Ahearn-Koch was the only board member to support annual training for the commissioners in regard to provisions of the City Charter.

Second, she was in favor of a recommendation for an amendment to the Charter calling for a supermajority — four people voting “Yes” — on the sale of any city-owned property, including parcels on the affordable housing list.

Commissioner Alpert, who made the motion opposing the latter recommendation, said she felt that the amendment would constrain the board members too much.

Ahearn-Koch, however, emphasized the fact that the property belongs to city citizens.

City Attorney Fournier will draft the necessary ordinances that the commissioners formally will have to approve, to put the Charter changes before the voters on the Nov. 8 General Election ballot. He will bring them back for review in a timely fashion, he added, to ensure they are approved ahead of the ballot preparation deadline of the Sarasota County Supervisor of Elections Office.