At the request of Sarasota County Commissioner Ron Cutsinger, one word will change in the second question on the November General Election ballot relative to the county board’s hopes for the extension of its penny sales tax program.

During the commission’s regular meeting on March 8, the first item on the Consent Agenda of routine business matters called for authorization of two March 29 public hearings related to the Surtax IV Program. One would focus on the continuation of the program itself for another 15 years, after Surtax III expires at the end of December 2024. The second hearing will pertain to county plans for the issuance of bonds to speed up construction of projects on the county’s list, if voters agree to the program extension from 2025 through 2039.

The county expects to reap approximately $908.2 million over the 15 years, if voters approve Surtax IV.

On Feb. 23, the commissioners unanimously approved a revised ballot question regarding the issuance of the bonds, which would be repaid with revenue generated by the penny sales tax.

That action followed concerns that Commissioners Michael Moran and Christian Ziegler raised during a Feb. 8 discussion about the Surtax IV Program. Both voted against the language that staff had proposed for the second ballot question, saying they feared that citizens would not approve the bonds because of the wording.

Although Chair Alan Maio, Commissioner Nancy Detert and Cutsinger approved the ballot question as proposed, Maio left the door open on Feb. 8, figuratively speaking, for a board member to work on a revised version for consideration on Feb. 23.

During that Feb. 23 meeting, Moran talked of having worked with county administrative staff and the Office of the County Attorney to craft the version of the second ballot question that the board members ended up approving that day.

However, on March 8, Cutsinger asked that the authorization for the public hearings be pulled from the Consent Agenda for discussion. He asked that the word “costs” be substituted for the word “risk” in the first line, Cutsinger. “Most folks understand ‘costs,’” Cutsinger pointed out. “Some may not fully comprehend what we mean by ‘risk.’”

During their past discussions regarding that bond question, commissioners pointed to the fact that inflation could continue to rise. Therefore, if voters allow them to issue bonds, they agreed, the county potentially could end up with more Surtax IV Program projects that residents want to see undertaken. 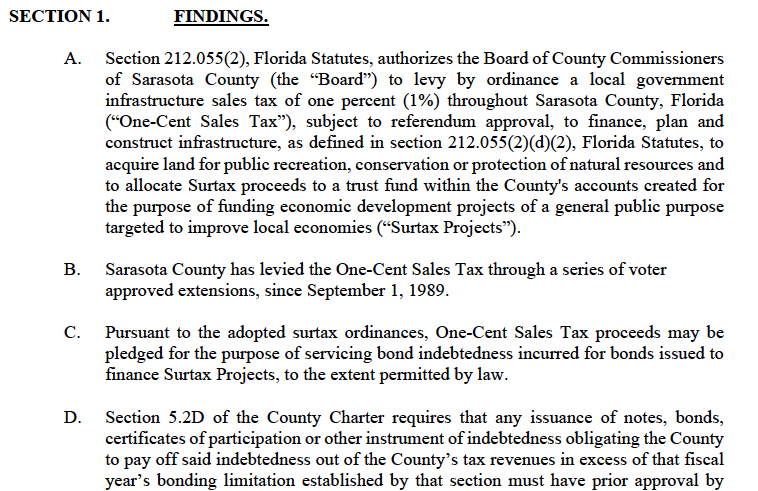 With his change, Cutsinger noted, the ballot question would read, “To reduce inflation costs and accelerate projects funded by a one-cent sales tax proceeds, shall Sarasota County be authorized to issue bonds payable from such proceeds in total principal amount not to exceed four hundred million dollars, maturing by December 31, 2039, bearing interest not exceeding the maximum lawful rate, in addition to bonds issued within limitations of section 5.2D of the Charter? Bonds are dependent on approval of the one-cent sales tax renewal above.”

Detert concurred that “costs” would be clearer than “risk.” Moreover, she noted, since state law restricts any ballot question to 75 words, the word substitution would not necessitate further tinkering with the language.

Moran joked that “risk” was a word that came to him because of his background in the insurance industry.

“As long as it’s clear to the taxpayer,” Moran pointed out of Cutsinger’s recommendation, Moran said he would have no problem with the word swap.

When Maio asked staff whether the commissioners should go ahead and vote on the language adjustment that day, or whether they should wait until the March 29 hearing, County Administrator Jonathan Lewis replied, “I don’t see any harm doing it today.”

Therefore, Cutsinger made the motion calling for the word change, and Detert seconded it.

After that passed 5-0, Elbrecht pointed out that the commissioners then needed to vote to approve the Consent Agenda item.

Cutsinger also made that motion, with Detert seconding it, and another unanimous vote resulted.