On split votes this week, the Sarasota City Commission approved the inclusion of a referendum on the Nov. 6 General Election ballot that will allow city voters to decide if they want to change the timing of city elections.

Additionally, if the measure passes, the majority of the board members agreed to extend the terms of the three incumbents for 18 months. If voters approve the change, the next election to fill the three district seats would be in November 2020, instead of May 2019, as planned. Additionally, the terms of the two at-large commissioners — which are set to expire in May 2021 — would be extended to November 2022.

Both Vice Mayor Jen Ahearn-Koch and Commissioner Willie Shaw voted “No” on each of the motions.

The referendum will allow city voters to choose August and November as the months for city elections, instead of March and May. Decide the Date leaders and supporters have pointed to lower voter turnout — especially among Hispanics, African-Americans and young people — during the spring elections.

The only decision remaining for the commissioners will be the ballot language for the November General Election. Commissioners discussed options during their June 18 regular meeting, but they finally agreed, by consensus, to ask City Attorney Robert Fournier to rework proposals he had provided them. Additionally, Ahearn-Koch — who had drafted her own version — said she would tweak it and submit it to City Auditor and Clerk Pamela Nadalini, so it also would be available for her colleagues to review it in time for the July 2 City Commission meeting.

The co-chairs of the Decide the Date campaign — Suzanne Atwell, a former mayor; and Larry Eger, public defender for the 12thJudicial District, were among the 13 people who addressed the commissioners during the public hearing this week. With the Decide the Date supporters having gathered 4,732 signatures — 27% more than the number needed to get the measure on the ballot — Atwell and Eger formally requested that the City Commission place the proposed City Charter amendment on the Nov. 6 ballot. They also said the city should not hold another spring election, which was a factor in two of the three options Fournier had provided the commissioners to consider in regard to implementation of the new election cycle, if the proposed City Charter amendment wins voter approval.

Essentially extending the changes out six to eight years, Eger said, “flies in the face of the will” of the people who signed the petition calling for the change in the election timing.

Michael Barfield of Sarasota, president of the American Civil Liberties Union (ACLU) of Florida, told the board members, “The citizens have spoken” through the petition drive. He also urged them to choose the option calling for the 18-month term extensions, so the next city elections would be held in November. That, he said, “is the most responsive date by which the voters will be able to implement the petition drive.”

A third option also called for spring 2019 elections for the district seats, but it included 18-month terms for the winners. A final spring election for the two at-large commissioners would have been scheduled in 2021 under that option, with their terms also set at 18 months.

Fournier described the three sets of options he had provided as “the universe of conceivable ways” to make the switch in the election cycle.

During the public hearing, Kate Lowman — who noted that she was speaking for herself, not as a founder of the organization STOP! — told the commissioners, “Many people would find it was a self-serving choice” if they voted to extend their terms by 18 months.

Yet, County Commissioner Paul Caragiulo — a former city commissioner — pointed out that that change “certainly [is] something that can be explained very, very quickly.”

Lowman was the only speaker to argue against a switch in the timing of the elections. “Putting the city issues at the end of a national ballot will enhance the power of big money, increase partisanship and delete the focus on city issues,” she said.

On the other side of that argument, Diana Hamilton told the commissioners that in November 2012, 70% of city voters participated in the general election, and 85% “voted all the way to the end of a four-page ballot,” which had charter amendments on it.

Several of the speakers did note a lack of clarity in the options for the proposed ballot language. “I appreciate the comments,” Fournier said afterward, adding that he found them constructive.

The ‘nuts and bolts’ of the change

In discussing the facets of the Decide the Date proposal on June 18, Fournier said he would refer to “first” and “second” elections.

Under the current system, the first election is held in March; the second, in May. Decide the Date calls for a first election in August, if three or more persons qualify as candidates for the three district seats and if four or more qualify for the two at-large seats. That first election would be held on the same date as the August primaries, he pointed out.

If only two people qualified for a district seat, or if only three qualified for the at-large seats, then those elections would be on the November ballot, Fournier pointed out. 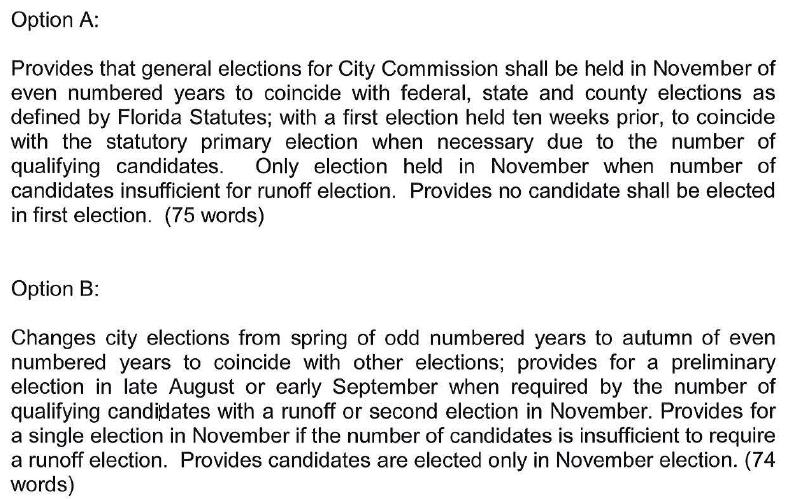 As the commissioners delved into the proposed ballot language, they debated how to make the options clearer to voters. “The real problem is the limitation of 75 words,” Fournier said, referring to a legal requirement.

Commissioner Hagen Brody characterized Option C as the clearest of the three Fournier had drafted. That option says the following: “Provides that elections for City Commission shall be held in November of even numbered years to coincide with federal, state, county and district elections as defined by Florida Statutes; with a first election held ten weeks prior, to coincide with the primary election as defined by Florida Statutes when required due to the number of qualifying candidates. Provides no candidates shall be elected in first election. Provides that selection of Mayor and Vice Mayor coincides.”

Ahearn-Koch had proposed the following: “Changes non-partisan City Commission elections from March & May in odd numbered years to August & November of even numbered years. This coincides with partisan primary federal, state, and county elections. However, no candidate shall be elected in this first election. A November-only election occurs only if the number of candidates is insufficient to require a first election.”

Furthermore, she continued, whereas the nonpartisan city elections are held in March and May, August and November elections will coincide with partisan races.

With Option C, Brody pointed out, “Everybody knows exactly what is happening.”

When Mayor Liz Alpert called on Commissioner Shaw for comments, he held up and shook the printed copy of the proposed ordinance. “I’m one of dem colored folks that all you white folks done spoke for that don’t understand none of this,” he began. “So all ya’ll have spoke and told me how all of us are gonna vote for ya’ll and everybody else, but ain’t nobody splained nuttin’ to me. I cain’t see what [Options] A, B and C does for me. I’m just a bit confused, ’cause it’s not clear, it’s not concise and none of this fits me at all. But unless ya’ll white folks can come back down here and tell me more about this, I wouldn’t vote for none of this.”

Twitters of laughter emanated from the audience as he spoke. When he concluded his remarks, Alpert chuckled and asked that the commissioners continue the discussion of the ballot language.

Finally, Brody suggested he would make a motion to approve Option C. Then Commissioner Shelli Freeland Eddie responded, “I need to see all the language before I can tell you how I feel,” referring to tweaks her colleagues and Fournier had suggested.

By consensus, the commissioners agreed to continue that discussion until their July 2 meeting.

As they then delved into implementation options, which the city will need if the referendum is approved, Alpert asked Fournier whether any aspect of that would be on the ballot.

That would only be in the ordinance, he responded.

Freeland Eddie asked that the proposed ordinance and ballot language — after they are approved — be made available to the public in Spanish as well as English. Shaw concurred with her.

City Auditor and Clerk Nadalini said she could make certain that the translation was provided in city documents, but she has no control over what the Sarasota County Supervisor of Elections Office publishes.