County administrator to schedule another shoreline hardening discussion in the fall

Given the increasing number of requests for help to protect private property on rapidly eroding Sarasota County shorelines, the County Commission is seeking ideas from the public about modifications to the county’s Coastal Setback Code.

Chair Charles Hines raised the issue on April 9, suggesting that it might be time for the board to consider policy changes that would make shoreline hardening easier.

On May 22, Howard Berna, manager of the Environmental Permitting Division, pointed out that since 2000, staff has appeared before the commission 38 times to discuss requests for Class I Emergency Variances, which are for “emergencies caused by recent calamitous occurrences such as, but not limited to, hurricanes, tornadoes, floods, or high winds where buildings, swimming pools, roads, or public facilities have been damaged or destroyed, or are directly and immediately anticipated to be threatened.”

Twenty-four of those Class I Emergency Variances have been sought by property owners since 2012, Berna said.

The number of applications for Class II Emergency Variances also has been increasing, he noted. Those deal with temporary shoreline measures designed to protect reasonable use of property until the applicant can pursue a permanent solution, Berna reminded the board. Only six have been brought to the commission since the Coastal Setback Code was adopted in 1979, Berna said; four have been addressed since 2018.

“That is absolute evidence that we’re having an increase in these [erosion] problems,” Hines stressed.

After the staff presentation and then discussion on May 22, Hines suggested that property owners — especially on Manasota and Casey keys, where concerns about erosion undermining beach structures have been growing in recent years — work with engineers and other professionals to pose ideas to the board.

Commissioner Alan Maio added that staff members in the county’s Environmental Protection and Environmental Permitting divisions, who handle the requests for emergency variances, also feel free to suggest modifications to the Coastal Setback Code. Staff members may be hesitant to do so, he pointed out, as they might be fearful of intruding on the commission’s prerogative to make policy. However, Maio stressed, “If we didn’t like [a proposal from staff], we would just vote it down.”

“I think our staff … clearly feels empowered,” Hines responded. If they have ideas about tweaking the language in county policies, he continued, they can bring those to the board.

Commissioner Michael Moran also called for staff to “give us unfiltered information” from residents affected by shoreline erosion, as well as others in the community who are interested in the issue.

County Administrator Jonathan Lewis said staff would provide the board members any comments that come in on the topic and then plan on an update in the fall. After that second presentation, Lewis said, staff would ask whether the commissioners then would like to offer specific direction about policy changes.

At the outset of the May 22 staff presentation, Rachel Herman, manager of the Environmental Protection Division, pointed out that the County Commission adopted the Coastal Setback Code in 1979. “It is a prohibitory ordinance,” she noted, in contrast to many other county regulations.

Specifically, she explained, it prohibits construction, excavation and alteration seaward of the Gulf Beach Setback Line (GBSL) and the Barrier Island Twenty-Year Hazard Line. However, it does allow for exemptions, she said, such as the placement of sandbags on the beach and dune walkovers.

The GBSL, Berna explained, “is effectively assisting homeowners to stay out of harm’s way in the coastal high-hazard area.”

Herman reviewed relevant environmental policies in the county’s Comprehensive Plan, including Policy 4.1.2, which says, in part, “Hardening of Gulf beaches or passes shall be prohibited unless such hardening has been found to be in the public interest.” Even then, she continued, a hardening project that is permitted “shall not impact lateral public pedestrian access, and shall minimize adverse impacts to coastal processes and resources, neighboring properties, and the values and functions of beaches and dune systems …”

Another policy, 4.5.4, she noted, encourages shoreline softening instead of hardening. It says, “Where necessary, appropriate native coastal habitat restoration planting and enhancement projects shall be required in development orders authorizing shoreline hardening.”

Beach nourishment, Herman pointed out, is promoted instead of shoreline hardening. 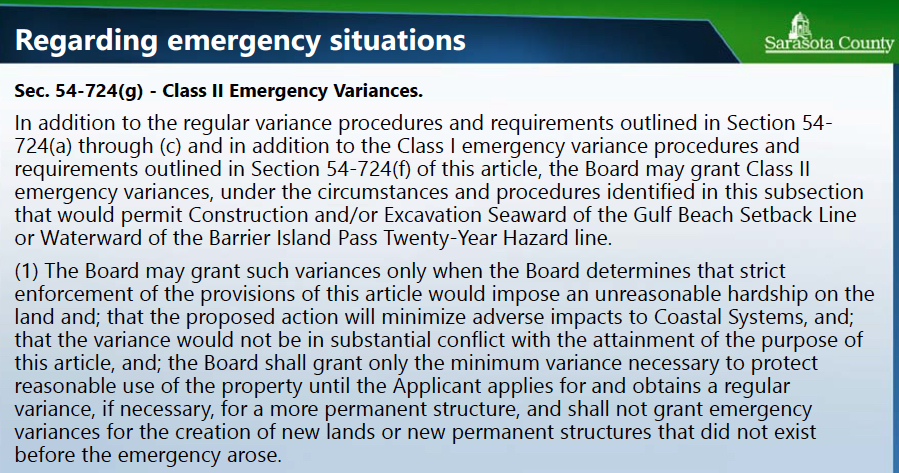 Berna, the Environmental Permitting manager, reminded the commissioners that in 2018, they amended the Coastal Setback Code to allow for the temporary placement of sandbags for up to three years on private property. Among the measures allowed under that part of the code, he noted, are “trap bags,” which he described as “accordion-style cells that are filled with sand.”

Additionally, Berna emphasized, when applications for Class I Emergency Variances come in, staff “prioritizes their review.” In many cases, he said, those variances can be approved within 24 to 48 hours.

With Class II Emergency Variances, he continued, staff works to get those before the commission for a decision on a fast track.

Berna also talked about the policy that encourages dune restoration projects. Those entail the placement of beach-compatible sand and the planting of native dune vegetation. “Those plants themselves are a very good first line of defense when they become established,” he noted. The plants drop very long roots — called “taproots” — that help hold the sand in place, he added. Still, Berna acknowledged, that measure is “not a foolproof method by any means.”

A sense of urgency

Following the presentation, Hines told his colleagues that each might have his or her own ideas about how to tweak the Coastal Setback Code. Nonetheless, he continued, “It doesn’t work very well for us to do that up here.”

He added that he has asked members of the Manasota Key, North Manasota Key and Casey Key associations “to bring us a white paper or memo or something from engineers, professionals that do [shoreline protection work] all the time, and say that ‘This is our recommendation.’ That hasn’t happened yet.”

Commissioner Maio concurred with Hines’ suggestion for the production of such a document, though he acknowledged that representatives of the keys “might not want to do it together.” Maio did emphasize the need for “competent professional testimony … so we know what to ask for [from staff in terms of tweaking the Coastal Setback Code].”

“Without the keys’ help on this,” Hines continued, “it’s going to be up to us.” 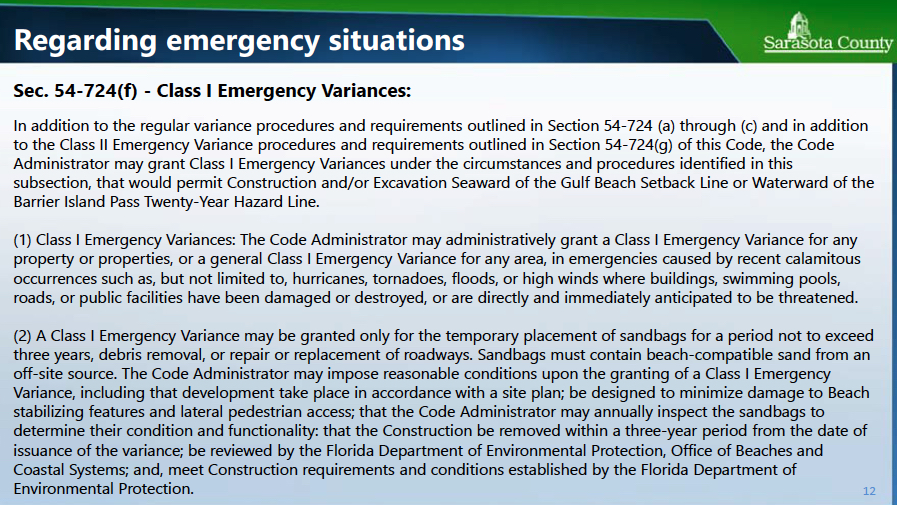 Commissioner Nancy Detert responded with her often-stated aversion to seawalls, because of the demonstration of worsened erosion on either side of the structures.

She prefers the code’s encouragement for the creation of dunes and native vegetation, she said.

Further, Detert criticized property owners who want to construct buildings seaward of the GBSL. “It’s our main focus to protect the beach for everyone, the land for everyone … and their houses to the best of our ability, without building seawalls.”

Staff, she added, “has a lot of good suggestions on how we can protect people’s homes without harming the environment. … That’s the direction we need to go.”

Maio pointed out that in the four-and-a-half years he has served as a county commissioner, the board has not authorized new home construction seaward of the GBSL. “The dilemma is the people that are in existing homes [built prior to the establishment of the GBSL].”

People moving to Sarasota County’s shoreline from the North or the Midwest, for example, Maio continued, “have noidea the beach moves. … I’ve sat through some of the most difficulthearings [as a county commissioner]. … We’ve got to come up with a way that people who are trying to protect and save their homes have a way to do it.”

Hines referenced language in the Coastal Setback Code that encourages beach renourishment projects instead of shoreline hardening. Yet, he said, “People have spent hundreds of thousands of dollars to bring in beach sand only to see it wash out in a year or two. … Our options are difficult when the policy has been to deny hardening.”

Further, he said, many alarming situations that have arisen for property owners in the past five years do not conform to the criteria in the code for the approval of emergency variances. “This is where we need some interpretation.”

As he understands it, he continued, when erosion has brought the Gulf to within 25 feet of a structure, then staff has determined that an emergency variance is appropriate. Yet, Hines asked, is 25 feet sufficient? “We’ve not set that distance for our staff.”

Part of the board’s policy discussion, he said, needs to focus on whether destruction of a building is reasonably foreseeable instead of immediate. Perhaps the Coastal Setback Code should be more lenient in its language regarding situations where erosion is ongoing, he suggested — when the beach “is just gone consistently.”

Detert voiced her desire again to keep the attention on “how we’re supposed to save our barrier islands,” suggesting the board continue to consider problems on a case-by-case basis.

She feared, she added, that if the board does modify the Coastal Setback Code, that will lead to even more requests from homeowners for shoreline hardening measures — especially on Siesta Key, where the beach has grown wider over the past several years.

Detert also pointed out that if a property owner has received a Coastal Setback Variance to build structures beyond the GBSL, “We’re not responsible for providing you a beach.”

Still, she continued, perhaps the board members could modify the code to make it easier for property owners to use sandbags as protective measures.

“I think the folks on the keys get the message on what they need to do,” Hines said. “I’ve pointed to language I’m open to potentially changing to deal with this.”