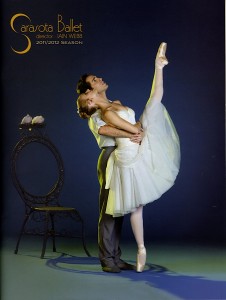 For a second year, Sarasota Ballet’s final performance of the season showcased the choreographic efforts of five of the company”s dancers with uneven results. I believe the dancers are lucky, as it is rare for a professional company to offer what is essentially an evening workshop of promises yet to be fulfilled. Though it’s a wonderful opportunity for the fledging choreographers, if this experiment is to continue, it should be offered as either a benefit evening or at a reduced cost to the company’s loyal following.

That said, I have to admit that I find it a rare treat to see new talent and that “Symphony of Sorrows,” Ricardo Graziano’s spare exploration of grief, death, loss and the power of love was the surprise of the evening. It was unusual to discover that a young choreographer had chosen such a deep and sorrowful subject, but it was also a pleasure to see how skillfully he had succeeded in creating a work of quiet emotion, evident from the opening moments as the 10 dancers (women in black, men bare-chested) slowly slid in and out of a blanket of darkness. Set to Henry Gorecki’s mournful Symphony No. 3, the choreography throughout the work reminded me of early modern dance with the emphasis on emotion translated into body movements and gestures.

Familiar postures of grief traveled from one dancer to another: hands over eyes; torsos bent under the weight of pain; arms reaching out for help; and yet there was a feeling of calmness in the unison movements, and in the series of supporting pas de deux with their extraordinarily inventive lifts. In the most dramatic yet symbolic of these duets, Ricardo Rhodes gently held an upside down Christine Peixto, who clung to his back like a vine growing on a tree. Surprising for a young choreographer, the stage was never too crowded or too busy, and with a little editing, the emotional undertones, already apparent, will be even stronger.

“On the Outside,” Octavio Martin’s sultry interpretation of Mathann Masterson’s painting of chairs, was equally ambitious and equally a crowd pleaser. Martin had originally choreographed this work set two years ago to tango music by Astor Piazzolla and Mikael Joback, and I believe it is essentially the same. A man’s seductive voice recited a poem in Spanish as the scrim rose on two couples emerging out of the darkness (Aaron Muhl’s stunning lighting design). Girls shadowed in silhouette straddled their chairs while the rhythms of the tango music  intensified. Five men strode into view, scorching the stage with machismo urgency in their wide lunges, thrusting hips and low leaps before dancing with their partners in a dramatic, emotional interpretation of the classical tango.

The music created a soulful cushion mirroring a series of duets that moved seamlessly as couples pulled and pushed towards and away from one another, before coming together in an ongoing rush of lifts. Midway, the poem …”this is a love story …” was read in English and the quality of the choreography changed: The suggestion of violent emotion faded into softer, more lyrical interactions in the duets, and eventually one woman (Emily Dixon) was lifted above the shoulders of the men as if in a symbol of adoration. The 12 dancers, mostly young corps de ballet dancers, were so convincingly passionate in their moves they could easily claim to have been born dancing the tango.

One caveat: At the end of the ballet, the dancers formed a group in a corner of the stage and then raised their hands in supplication, a gesture that had no connection to what had come before.

Of the three remaining ballets on the program, I think that “Hip2BeSquare,” choreographed by Ricki Bertoni, was not only the most successful, but hinted at future success as he learns to be more secure with complex choreography. Set to electronic music, 5Moar Ghost’s Nstuff by Justice & Deadmau, the program notes quoted Bertoni as saying that his  inspiration came from the visual arts, particularly, he said, “from painting and sculpture from Cubism”; and specifically from an abstract painting by Ernesto Barreto that was used as the backdrop for the ballet. Bertoni also explained that the female dancers were dressed to represent color, and the male dancers, in black from the tops of their hoodies to the tips of their toes, were to represent the lines; but, when gathered together, they looked like a secret clan.

There was a mild suggestion of unison break dancing in the opening moments of the ballet; a group of young people competed in a challenge dance; Logan Learned had an opportunity to spin and fly about the stage; there were inventive lifts; and a variety of formations revealed an understanding of space. However, I kept waiting for the dancers to burst through the underlying carefulness of the classical ballet steps with nonstop movement, capturing the energy of the music. Nevertheless, this was a nice, first piece —short and to the point.

James Carter’s ballet, “Holiday Overture,” to Elliot Carter’s light, spirited score of the same name, celebrating the liberation of Paris after World War II, opened with the promise of being an easy, happy ballet. Abigail Henninger, all in white, was in a sense the swan queen surrounded by her court of nine girls in red, white and blue who smiled and flirted with the audience.

Henninger, with the long-legged look of a Balanchine dancer, showed off her strength and flexibility in an easy attitude, with her toe skimming the back of her head and in her joyous leaps as she led the dancers in an unending display of bourees, swinging hips, high kicks and arabesques. Carter can move dancers around a stage in a variety of delightful patterns, and he knows how to let a dancer shine center stage; but there was too much repetition, too many high kicks and not enough connection to the music to consider this a successful endeavor.

“Headlines,” choreographed by Kate Honea, was set to a compilation of popular songs. But what can I say when amusing pictures of company members pasted over newspaper headlines and projected as the backdrop for the ballet created the most intriguing aspect of the ballet. Honea has a popular, theatrical vision, but the total effect of the ballet was like watching dancers jitterbugging at a high school prom .

One last comment: I’ve mostly commented on the choreography and the choreographers, but it was clear that the company dancers performed with enthusiastic dedication in each of the ballets.