In about half the time they spent on the issue on Feb. 22, the Sarasota city commissioners this week voted 4-1 to approve a revised tree protection ordinance for the city.

Mayor Erik Arroyo was in the minority.

A second, final vote on the regulations will be necessary before they go into effect. That is anticipated to be part of the agenda for the board’s regular meeting on April 18, City Attorney Robert Fournier told The Sarasota News Leader.

When the board members do conduct the second hearing, Assistant City Attorney Joe Mladinich told them Monday, he will have a new schedule of fines and fees for them to consider, as well.

Further, Kevin McAndrew, general manager of the city’s Development Services Department, explained on March 21 that it is staff’s intent to “prepare an information fact sheet” designed for homeowners, to help them understand the city’s tree protection laws.

Commissioner Jen Ahearn-Koch pointed out that the city’s senior arborist, Mark Miller, has, in her experience, been quick to respond to public requests for help in specific situations. He “takes time to explain the ordinance.”

When she asked whether Miller still would be available for such assistance, City Manager Marlon Brown replied that members of the public “will be able to call on Mr. Miller for any sort of advice.”

Among the changes in the city’s regulations, four new species of grand trees will be protected. Along with live oaks, the new grand tree species are sand live oaks, slash pines, longleaf pines and Southern red cedars.

However, on a 2-3 vote, a motion that Mayor Erik Arroyo had sought — which Commissioner Hagen Brody made — failed in its call for designating any examples of those species as grand trees only if they have a diameter of 24 inches or greater.

When Arroyo asked the city’s senior arborist, Mark Miller for his view on the issue, Miller said he could support the 24-inch designation.

Then Commissioner Ahearn-Koch pointed out that, typically, those species of pine trees often do not reach that diameter. When she asked Miller about that, he replied, “I would say it’s a small percentage, yes.”

Then Brody told his colleagues, “I just think it’s so comical that we don’t take into account the fact that these are people’s yards that we’re talking about.”

At one point, Brody said, “I think everybody wants to protect mature, healthy, large trees that we keep saying have been here hundreds of years”— what he called “the truly grand trees.”

“It’s not a one-size-fits-all [situation] here,” Ahearn-Koch countered. “Slash pines only get to a certain diameter.” They can grow to 80 feet in height and reach the age of 100 without ending up with a 24-inch diameter, she stressed.

Moreover, Ahearn-Koch emphasized, “We want to avoid clear-cutting of lots.”

“I totally agree with Commissioner Ahearn-Koch on that,” Commissioner Liz Alpert said of the need for the smaller diameter for the pines and Southern red cedars. “Why not make sure a larger number of them get protected.”

Ahearn-Koch also reminded her colleagues that the Tree Advisory Committee (TAC) members spent two years discussing the city’s tree regulations. That ad hoc group with its diverse representatives — whom the commissioners appointed in 2017 — met 26 times and welcomed public comments at its meetings, she further emphasized.

Mayor Arroyo talked about his understanding that pine trees “frequently deteriorate to the point where they need to be taken down.”

“Pine trees are targeted and given a bad reputation,” Miller explained. Better protection for them would enable the city to preserve more of them, Miller added.

His understanding, Commissioner Brody said, is that pines are more susceptible to damage during storm events and hurricanes.

“I would disagree with the statement that pine trees are brittle and generally fail during wind events,” Miller responded. Yet, they are more sensitive, Miller continued, so protecting their roots by giving them a wider berth during construction projects “is necessary.”

Ahearn-Koch also had noted her understanding that three types of slash pines are native to “this region of the world … and all three are in danger of extinction …” They take six years to establish their roots, she continued, and then they “grow up very quickly. Further, she said, they are “overstory trees,” which means that their height allows other species to grow beneath them.

Miller told the commissioners that he agreed with Ahearn-Koch’s statements.

When Vice Mayor Battie asked for clarification about what Miller had recommended for the ordinance, City Manager Brown replied that Miller had told the board members that he would support the 24-inch designation.

Arroyo referenced an online search he had undertaken as the discussion was proceeding: He found that slash pines are located in Georgia; in Georgetown County, S.C.; in Central Florida; and in Louisiana.

Yet, Ahearn-Koch stood firm on her position and asked if Miller could offer further comments.

“The questioning phase is over,” Arroyo told her.

However, when Battie said he would like to hear Miller’s comments, Arroyo allowed Miller to respond.

“Obviously, if we can protect them when they’re younger,” Miller explained of the pines proposed for grand tree status, more of them would survive. “I personally would go with the TAC’s recommendation on that,” he added, noting that city staff had no issues with it.

“That is the biggest flip-flop I’ve ever heard in my life,” Brody interjected. Addressing Miller, Brody continued, “You literally 5 minutes ago said you supported 24 inches. We have to make policy decisions.”

Establishing the smaller dimension for the pines on the new grand tree list, Brody pointed out, would make it more difficult for homeowners to manage their yards.

“Let’s just make everything a grand tree,” he added, which would make it “incredibly impossible for anybody to remove a tree.”

Battie asked for the opportunity for Miller to defend himself in regard to the flip-flop comment.

Before Miller could respond, City Manager Brown said Miller told the commissioners Miller could support the 24-inch proposal. However, Miller also said that he would agree with the TAC recommendation for a 20-inch diameter for the pines and Southern red cedars.

Battie and Alpert sided with Ahearn-Koch, defeating Brody’s motion for the 24-inch diameter designation for all grand trees in the city.

On another motion that Arroyo requested, the commissioners unanimously agreed to remove the names of tree species whose planting the state prohibits from a list of “Undesirable Trees” in the revised ordinance. The prohibited trees will be named in a separate section of the ordinance.

During the discussion this week, Brody continued to insist, as he did during the previous debate  — on Feb. 22 — that the revised ordinance is too complicated. When he asked Assistant City Attorney Joe Mladinich how many pages it entails, Mladinich replied that it was 14 when he printed it out.

Nonetheless, Brody did acknowledge what he characterized as “not a huge appetite” among city residents for revisions of the TAC recommendations. However, Brody added, “I feel that wealthy people can navigate and deal with our tree ordinance … Middle class … our working people — just don’t have those resources, and that just frustrates me. … I think [the proposed ordinance] is unfair financially.”

Mladinich did explain that homeowners with low or moderate incomes pay “a greatlyreduced fee,” when they remove trees without obtaining permits first.

Instead of a fine ranging between $40 and $70 per inch of tree removed, Mladinich continued, the fine is $5 per inch.

Further, he noted, lower-income homeowners can ask city staff to draw from a fund with approximately $29,000 that has been set aside to help them cover payments of fines.

“A lot of people don’t know that we have this ordinance,” Brody stressed. “A lot of people take down a tree, and they’re hit with exorbitant fees … Massive five-figure fees that we’ve seen.”

Commissioner Ahearn-Koch said that she believes when people buy houses in the city, they are responsible for learning the rules, “and cutting down the trees is one of those things. Once a tree is gone, it’s gone.”

When McAndrew of the Development Services Department, tried to add a comment at one point, Brody interrupted him: “Just move on.” 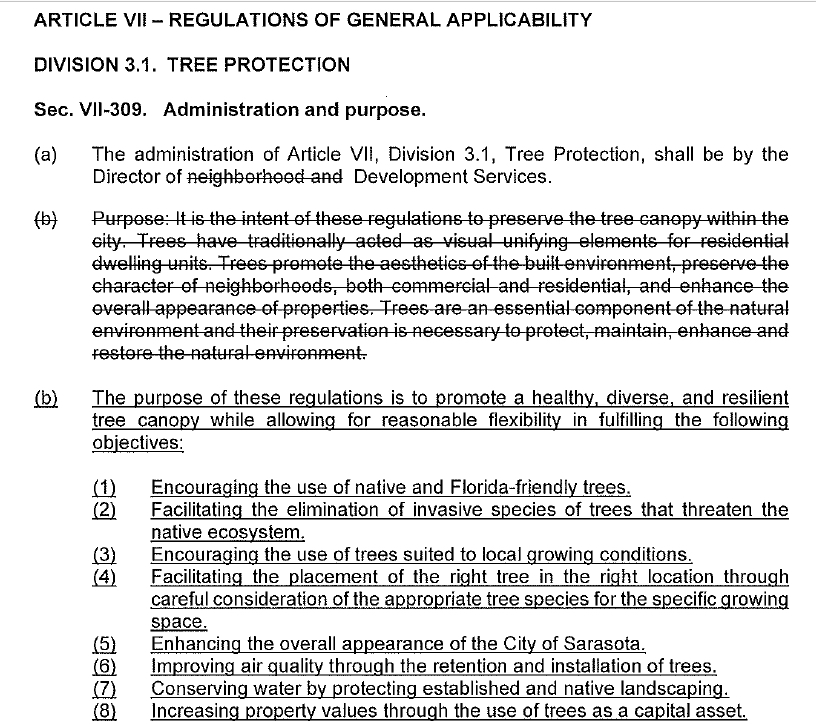 On yet one other motion that Brody made, Vice Mayor Battie did side with Arroyo and Brody. That motion called for all property owners in the city — regardless of whether they live on a barrier island — to be able to plant palm trees to mitigate the removal of palm trees. The previous ordinance called for such a provision only on the barrier islands.

Early on during the discussion, in response to a question from Brody, Assistant City Attorney Mladinich, who served as counsel for the Tree Advisory Committee, explained that if a property owner wished to remove a canopy tree, the individual could not replace it with a palm, except on the barrier islands within the city’s jurisdiction.

When Brody asked why the barrier islands had different regulations, Mladinich pointed out that a previous City Commission approved that distinction.

“I think that should be citywide,” Brody said of the provision. “I like palm trees; people like palm trees. … [People get] sick of raking the leaves [of hardwoods].”

He added, “I think this war on palm trees is ridiculous.”

When Commissioner Ahearn-Koch asked about the TAC’s recommendation to keep that stipulation just for the barrier islands, Mladinich told her that the committee members “didn’t get into that too much.” However, he said, he believes that distinction probably arose out of the fact that the barrier islands have “slightly different conditions” than the mainland. For example, trees on the islands are more tolerant of salt, Mladinich noted. Part of the decision, he continued, was related to the goal of encouraging “the intelligent planting of trees” — being aware of site factors that will enable certain species to thrive better than others in specific locations.