Speakers offer differing views of problems, with focus on health issues that can arise from constant exposure to loud noise

As Sarasota city commissioners pointed out this week, controversy over the city’s Sound Ordinance is not new. However, following close to two hours of discussion and public comments on March 7, the commissioners, by consensus, directed City Attorney Robert Fournier to work with the Sarasota Police Department and City Manager Marlon Brown to craft a simpler version of the ordinance so it can be enforced more easily.

“I think we should be clarifying what the powers of the police are and what the enforcement mechanisms are,” Mayor Erik Arroyo said.

During the discussion, Commissioner Hagen Brody called for objective measurement standards to be addressed in the revised city regulations. Referring to one proposal for the Sound Ordinance to incorporate the “plainly audible” standard in regard to noise or music exceeding prescribed levels, Brody said that “is just crazy to me.”

In a Feb. 23 memo to the commissioners, Fournier explained, “Plainly audible sound is usually defined in local ordinances to mean sound that can be heard by [a law enforcement] officer using his or her normal hearing [faculties] at a specified distance from the source of the sound.”

In a 2011 case, the memo said, the Florida Supreme Court “held that the prohibition of sound that is ‘plainly audible’ was not an unconstitutionally vague standard for determining whether a sound ordinance violation exists.” Since that decision in State v. Catalano was rendered, the memo continued, numerous local governments in Florida “have amended their sound ordinances to make use of the plainly audible standard in certain situations.” They “typically provide that ‘plainly audible’ sound within a certain number of feet from the source of the sound between certain designated times is prohibited.”

Nonetheless, Fournier wrote, the revised city Sound Ordinance “could still use maximum decibel levels as a means of regulating sound as well.”

“I think there’s an opportunity to use [the ‘plainly audible sound’ standard in the city ordinance],” Fournier told Brody on March 7, “but maybe in a limited way.”

The Police Department’s view on that point, Fournier added, “is important to me.”

Brody further suggested that it would be helpful to the commissioners, during their next discussion of the issues, to have access to recordings that demonstrate specific decibel levels. The Police Department has such recordings, he added. “We can see for ourselves kind of how loud 65 decibels is versus 100 decibels,” Brody pointed out.

Additionally, Brody called for revisions of the ordinance to deal separately with loud vehicle noises in downtown Sarasota — “revving” of engines, as he and several speakers noted.

Mayor Arroyo acknowledged the necessity of balancing business interests with those of downtown residents. He referenced public comments that afternoon from individuals who had talked of concerns about their health because of their having to contend with loud performances and days-long special events with music allowed to be performed up to the 100-decibel level.

“I think a good noise ordinance leaves a lot of people unhappy on both sides of the issues,” Brody told his colleagues, noting that he is comfortable with the standards in effect for downtown Sarasota. “I do think that downtown and St. Armands [Circle] are town squares. … We have to make sure that we don’t ruin that.”

Moreover, he said, “Special events have to have wide discretion,” in regard to the performances of bands and crowd noise. “Those are beloved events that bring thousands of people to our downtown.”

However, Brody continued, noise in residential neighborhoods needs to be regulated differently.

An alert to future downtown residents

One point that Commissioner Alpert made during the discussion was that people preparing to purchase downtown condominiums should be advised about the noise aspects of an urban area.

One speaker that afternoon, David Lough, president of the Downtown Sarasota Condominium Association, reminded the commissioners that he has estimated the number of new dwelling units under construction in downtown Sarasota to be “roughly 1,000,” with another thousand “in some stage of planning. … We have about 12,000 people in greater downtown now,” with 3,000 to 3,500 more expected.

Lough advocated for “sensible modifications” to the ordinance. “It’s just going to get more complicated as more people move downtown,” he said.

Further, Lough showed the commissioners an example of what he called a “high-end” window. “This may be a Mercedes and not required,” he continued, but perhaps city staff members who work with developers on project applications could talk to them about building features that would provide quieter environments for residents.

“Maybe [developers] can’t be required to go to this level,” Lough said of the window he was holding, “but we don’t want ’em using a Chevy, right?” (He acknowledged that he was trying to inject a little humor into the discussion.)

Vice Mayor Kyle Battie pointed out, “Sarasota is a destination of a lot of people,” including developers. Perhaps city regulations could be modified to require developers to include in new construction certain features, such as windows with stronger soundproofing, if those developers want to build in the downtown core, Battie suggested.

He conceded that such a measure would increase construction expenses, but he indicated that that would be appropriate, using the expression “Pay to play.”

As the discussion closed in on the hour-and-45-minute mark, Commissioner Brody objected to Commissioner Liz Alpert’s recommendation that the board members meet one-on-one with Fournier to voice their specific concerns, instead of addressing them during the meeting. Alpert had noted that such discussions would help Fournier in crafting a new version of the city regulations for the commissioners to review at a later meeting, before providing more specific direction to staff on how to proceed, she had indicated.

Fournier and Brown “need direction from us,” Brody said. Telling them to come back with suggested changes, he pointed out, “just puts policy decisions in their hands and kind of leaves the community hanging.”

In response to further comments from Brody, City Manager Brown said that clearer direction from the board always is helpful.

Nonetheless, Brown added, while Fournier is revising the ordinance, city staff “will continue enforcement” of the existing regulations. “People will just have to be patient,” Brown said, while Fournier’s work is underway.

Earlier, Arroyo had noted that the commission had a number of other agenda items to address that afternoon.

He added that he was “completely in favor of empowering [Fournier]” to work on a revised ordinance for the board members to review during a future meeting.

Commissioner Jen Ahearn-Koch talked of her numerous conversations with Fournier over the years about noise complaints that she has received from constituents. Fournier replied that he knows her views on the relevant issues.

“I don’t,” Brody interjected. “Sunshine means we have to discuss these things here,” Brody stressed, referring to the state’s public meetings regulations.

If the commissioners conveyed their thoughts to Fournier one-on-one, Brody continued, no one would know what those thoughts were.

Commissioner Alpert objected to that characterization. Handling the issues that way “does not violate [the state’s open meetings and records laws],” she emphasized. In fact, Alpert pointed out, such one-on-one meetings take place routinely between individual board members and city staff members.

It seemed clear to him, Arroyo said, that business owners and residents “wanted to find a happy medium. I think we can do that, but we can’t do that here.”

By count of The Sarasota News Leader, 18 members of the public addressed the Sound Ordinance on March 7, with a majority calling for city action to ensure people’s right to enjoy their homes in downtown Sarasota.

John McQuiston, for example, talked of having moved recently into a condominium in the new building located at 1500 State Street. There, he said, he has found the noise levels to be at “an unacceptable level.”

“One of the most egregious events” he has encountered, he continued, was the Osfest Reggae Block Party, which took place at the nearby Gator Club in late February. He described that event’s noise as being comparable to “having the television on in your house as loud as it would go, but maybe with a stronger bass tone. It was impossible to sleep.”

In contrast, Jamie Brester, general manager of the Gator Club, stressed to the commissioners that the building out of which the business operates has been in that spot for more than 100 years. “What was built around that, I cannot control.”

The Osfest is an annual event, she pointed out; this year, it raised $20,000 for a local domestic violence charity.

“We are for more residents,” more businesses and more outdoor events, Brester said, as those will generate more tax revenue for the city.

Nonetheless, she added, “I think changing the noise ordinance is definitely needed. It’s so broad.”

Referencing complaints about the Gator Club, resident Jim Lampl pointed out that, since the business was established 100 years ago, louder music has become more common in entertainment venues; yet, at the same time, more scientific research has shown the harm that persistent exposure to loud noise can cause.

Sleep deprivation, Lampl noted, can lead to obesity, diabetes and depression, for examples. “I would make a case that loud music can be a physical assault.”

Conversely, John Staley talked of how much he enjoys the Gator Club and the activity at night on Main Street. “I don’t understand how people can build a building and then complain,” he added. “They’re living downtown. Ninety-nine percent of Sarasota County is dead.”

Owen Farrell, general manager of Cask & Ale, which is located at 1548 Main St., pointed out that he has been a city resident for about 22 years and a worker in the restaurant/bar industry for approximately 20 years. He told the commissioners he believes the ordinance could be modified to provide “some common ground.”

However, he added, if the board members chose to lower the maximum noise level to 65 decibels, that would be “fairly detrimental” to many of the downtown businesses.

Among the last speakers, resident Kelly Franklin read from an email she sent the commissioners on March 1.

Sarasota is not the only city experiencing noise pollution problems, she told the board members on March 7. The Stetson Law Review observed that “‘as Florida cities expand to meet increasing population demands, municipalities must meet the challenge of effectively abating harmful noise pollution in a way that balances the often conflicting interests of residents, business owners, and developers and the noisemaker’s right to free expression and the unwilling listener’s right to peace and tranquility.’”

Mixed-use urban planning sounds great in theory, but is often less harmonious in practice, because living, working and playing in the same location is inherently problematic when one person’s nightclub is only a few dozen feet from another’s bedroom, she continued.

During that past 36 months, Franklin added, the Sarasota Police Department had fielded 3,800 separate calls to 911 Dispatch in regard to noise issues. After undertaking “some rough analysis of the complaints,” Franklin noted, she distilled them into a list, with the top 75 representing locations that had at least seven separate reports, “and because 75 is approximately the decibel level when sound turns to harmful noise.” 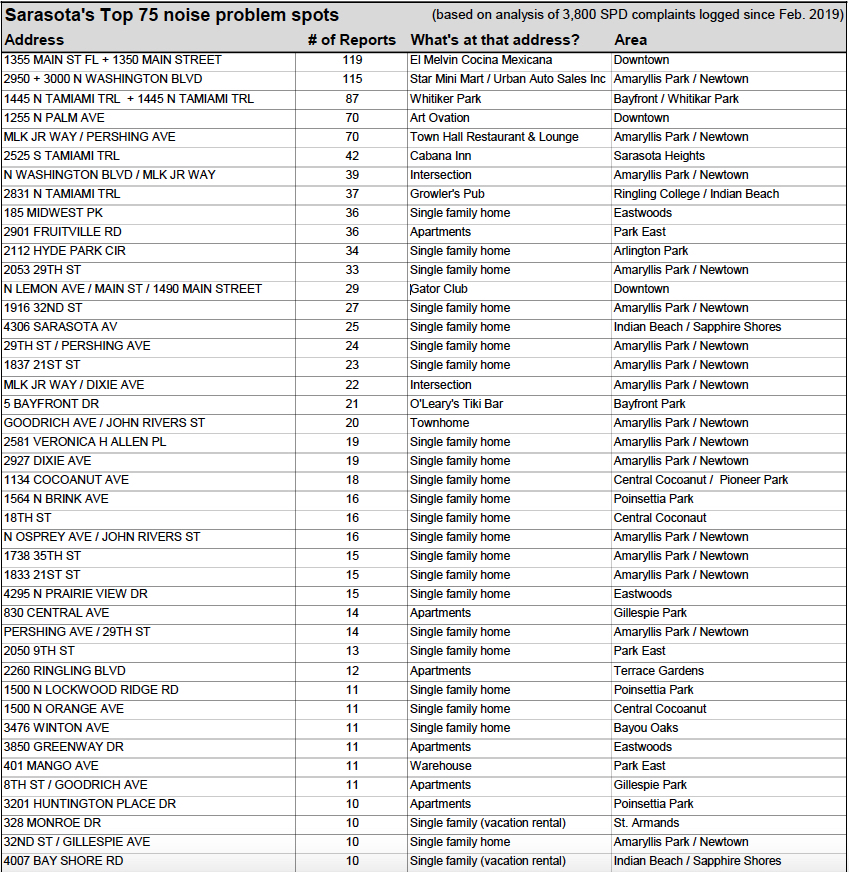 A perusal of her list, she continued in her email, “confirms what most know either anecdotally (or aurally if they happen to live near these areas): that the conflicts and issues stem largely from the co-location of bars and entertainment areas with residential uses and the co-mingling of vacation rentals with single family homes.

“Compounding this issue for Sarasota in particular is the fact that our existing sound ordinance contains conflicting measures of what constitutes noise, some of which require specialized training and equipment to calculate and enforce which [the Sarasota Police Department] does not possess.”

“Please hear the outcry of citizens whose lives are being adversely impacted by Sarasota’s growing noise problem, and move toward using the simpler intuitive measure of plain audibility at 50 feet that is already in our code to begin enforcing the unreasonable sound prohibitions of our ordinance,” she concluded her email — and remarks — with emphasis.