Nonprofit’s lawsuit in federal court following up on commission efforts in 2016, one of its leaders points out

A member of the board of directors of Save Our Siesta Sand 2 (SOSS2) has asked the Sarasota County Commission once again to press the U.S. Army Corps of Engineers (USACE) to undertake an in-depth environmental analysis of the federal agency’s proposal to remove sand from Big Sarasota Pass to renourish 1.56 miles of South Lido Key Beach.

On Oct. 7, Mark Smith, a 25-year Siesta Key resident and business owner, made the request as he appeared during the morning Open to the Public period for comments on topics not on the day’s agenda.

Smith pointed out that SOSS2 filed a motion in late August, asking a federal judge in Tampa to rule that an Environmental Impact Statement (EIS) is necessary before the USACE can remove any sand from Big Pass.

A Siesta Key-based nonprofit, SOSS2 filed suit against the USACE in January in the U.S. District Court for the Middle District of Florida, arguing that the USACE has violated federal regulations in refusing to pursue an EIS before removing up to 1.3 million cubic yards of sand from Big Pass. The waterway dividing Lido and Siesta keys never has been dredged.

“There’s not enough environmental information to confirm no harm to the Sarasota Bay ecosystem,” Smith said of the modeling the USACE has undertaken for the Lido project.

About 950,000 cubic yards of sand is expected to be placed on the eroded Lido shoreline, Smith noted. (The rest of the sediment from Big Pass is likely to be lost during the dredging process, based on USACE documents submitted to the Florida Department of Environmental Protection.)

Smith stressed that the 950,000 figure is “four times more than the average dredge amount for Lido going back to 1964.”

In a December 2016 letter to the County Commission, Smith — as chair of the Siesta Key Chamber of Commerce — wrote that Lido Key’s beach had been renourished 12 times since 1964, “on an average of every 4 years.” Further, he added, the average amount of sand per dredge was 253,000 cubic yards.

A manmade island, Lido Key has experienced consistent and severe erosion over the decades. The City of Sarasota completed an emergency beach renourishment project on the Lido shoreline in April, using sand from New Pass.

On Oct. 7, Smith also referenced the peer review the County Commission requested in 2015, in regard to the USACE’s proposal for what officially is the Lido Key Hurricane and Storm Damage Reduction Project. That analysis of the USACE’s plans, Smith said, reached the conclusion that no assurances could be made that Ted Sperling Park on South Lido, Lido Beach, Siesta Beach or “navigation in Big Pass” would escape harm if the USACE were allowed to proceed without conducting an EIS.

(During a March 2016 presentation to the County Commission on the peer review — which was performed by the nationally known firm Atkins— consultant Charles Mopps explained that the technology the USACE used in researching potential impacts of the Big Pass/Lido initiative has two-dimensional capabilities. The USACE’s CMS model, Mopps added, is proprietary; the USACE “pretty much developed [it].” A three-dimensional technology called Delft3D is preferable, he continued, because of “how [truthfully] that model could potentially predict [results].” Delft3D was created in The Netherlands, he said. It is an open source software, as indicated on the website from which it can be downloaded.)

In August 2016, Smith continued, the commissioners agreed to send a letter to the USACE, requesting an EIS, based on the guidelines of the National Environmental Policy Act (NEPA).

However, no EIS was conducted.

In June 2018, Smith added, the Florida Department of Environmental Protection (FDEP) issued the necessary permit to the USACE and its co-applicant for the Lido project — the City of Sarasota.

Then, in September 2018, Smith added, SOSS2 announced its intent to file a complaint against the USACE for failure to undertake an EIS before dredging Big Pass. That lawsuit alleges that the USACE has violated NEPA regulations, along with the Endangered Species Act and the Clean Water Act. (In July 2018, the USACE issued only an updated Environmental Assessment/Finding of No Significant Impact for the Lido initiative.)

In its federal court case, Smith pointed out, SOSS2 has been following through on the county’s efforts to persuade the USACE to conduct an EIS.

The USACE is stalled right now in its plans for Lido, as Smith explained to the commission. In May, the federal agency issued a solicitation for bids on the project. Yet, in late July, when the USACE opened the two it had received, Smith said, the lower one was 56% higher than the USACE’s estimate of the project’s expense; the higher bid was 92% more than the USACE estimate.

Perhaps, if the USACE revises the bid to reduce the scope of the project, Smith said, that “would negate the need to dredge Big Pass.”

A history of unexpected consequences

“The Army Corps has failed in other communities,” Smith pointed out, in pursuing a variety of initiatives.

In another case Smith referenced, the USACE finally agreed to conduct new studies before starting a dredging project to expand Port Everglades so it could serve the newer shipping vessels that are too large to use the Panama Canal. The plaintiffs in that case were the Miami Waterkeeper, the Center for Biological Diversity, the Florida Wildlife Federation and the Diving Equipment and Manufacturing Association.

(A January 2017 news release written by a team with the Center for Biological Diversity said, “‘The Corps’ and [National Marine Fisheries Service’s] prior environmental analyses simply ignored evidence from PortMiami that showed estimated impacts from dredging near corals are significantly more harmful and widespread than expected,’ said Rachel Silverstein, executive director and waterkeeper of Miami Waterkeeper. ‘The current environmental statements do not reflect “best available science,” which is the legal standard for agency decision-making, and therefore, they must be redone.’”)

(In April, the USACE released a status report on that dredging project, which said the initiative had been delayed until 2021.)

Additionally, Smith pointed out to the commissioners, a PortMiami dredging initiative “killed more coral than the Army Corps protected.”

“We do not want Sarasota Bay and Big Pass to be added to the list of failed Army Corps projects,” Smith told the commissioners. “This is why you should continue to insist on an Environmental Impact Statement, as stewards of Sarasota Bay.” 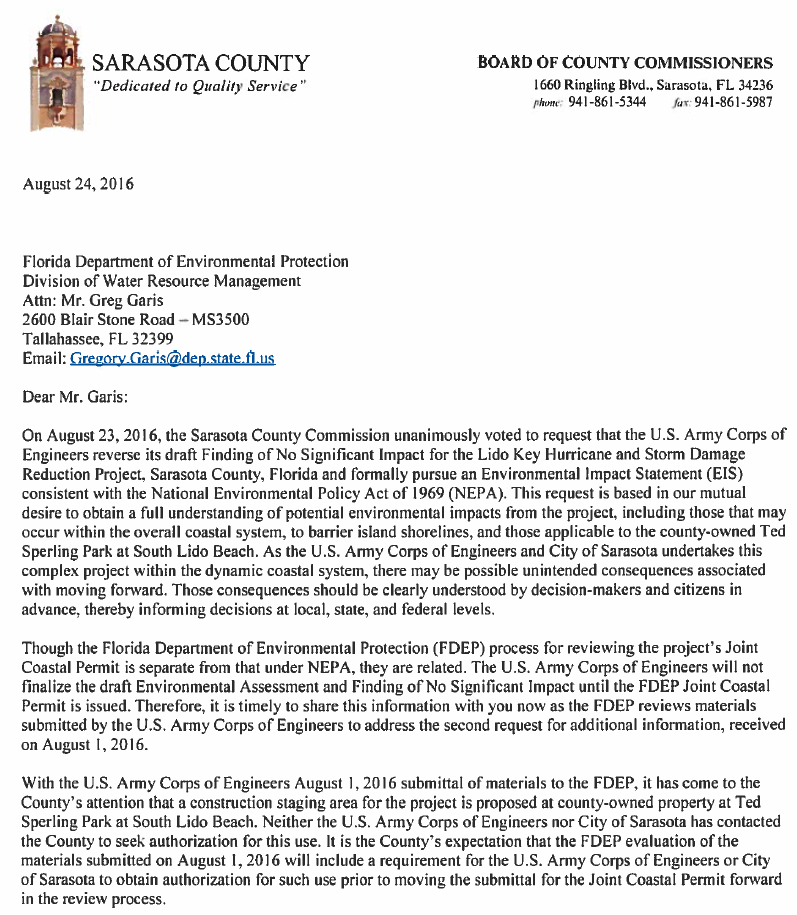 A little levity to lighten a serious topic

Commissioner Alan Maio responded to Smith, noting that it was only about the sixth time in Maio’s five years on the board that he had done so with an Open to the Public speaker.

Adding that he was chair when the commission approved the request for the EIS in 2016, Maio said that the “two- or three-page technical document that we sent out” was prepared by county staff.

Did any response ever come from the USACE, Maio asked.

“The Army Corps did respond and basically had 10 reasons why they didn’t need to do the EIS,” Smith replied. As chair of the Siesta Key Chamber of Commerce at the time, Smith added, he wrote a letter to the commissioners, refuting all 10 of those reasons.

“I encourage you all to go back and read it. It’s some of my best work,” Smith added with a hint of a chuckle, prompting laughter among the audience members in the Commission Chambers that morning.

“Was your letter more brilliant than the one the county sent out?” Maio asked.

“Thank you,” Mao said, as the laughter swelled.