Although the five-day enrollment total for the Sarasota County Public Schools was 688 below the 41,962 estimate for the 2012-13 school year, district officials will be hiring more staff, Superintendent Lori White told The Sarasota News Leader Aug. 29.

“It really is good news,” she said, noting that over recent years, the district had had to lay off staff because of declining enrollment.

Although White did not know exactly how many new instructors would be needed, the News Leader learned that one school alone is looking for five additional instructors — Phillippi Shores Elementary School, located at the intersection of Proctor Road and U.S. 41.

Phillippi Shores was projected to have 674 students this year, Principal Allison Foster said in an Aug. 29 interview, but it already had exceeded that count by 79.

Because of the state’s Class Size Amendment, she pointed out, she’s been busy trying to hire new staff and find room for everybody.

“We’re running out of space,” she said.

So far, Foster added, she had not been able to analyze the demographics to determine why more students had shown up than expected. No new residential development had been completed in the school’s attendance district, she pointed out. “We really haven’t been able to put a finger on it.”

Moreover, she said, the extra students were spread out among all the grades.

“It’s a great problem to have, I suppose,” Foster added of the higher count.

Al Weidner, the Sarasota County Public Schools’ deputy chief financial officer, pointed out in an interview with the News Leader that Southside Elementary was experiencing a student boom similar to the one at Phillippi Shores.

Southside expected 719 students, but it reported 770 for the five-day count.

Both Southside and Phillippi Shores are closed to students who do not live in those attendance districts, Weidner noted. Perhaps more affordable housing was drawing people back to North County, he suggested.

During the economic boom, he said, attendance grew in South County, as families moved into North Port, especially, because homes were less expensive.

For example, Weidner said, the five-day count showed Lamarque Elementary in North Port down 75 students over the number projected — 841 in classes instead of the 916 anticipated.

Among other five-day statistics, the county’s charter schools were reporting 327 fewer students than expected — 5,401 vs. 5,728. However, Weidner explained that charter schools “do budget on the higher side,” because their contracts with the district do not allow them to go over enrollment projections.

Alternate school enrollment also was lower than projected for the five-day count, with 95 students reported instead of the 149 projected.

Weidner explained that that simply reflected the fact that some students had not been assigned yet to those schools.

“Overall,” Weidner pointed out, “we’re pretty much on target” for the projected enrollment

State funding for the district is based on formal enrollment counts in October and February, Weidner said.

In a related discussion, Ken Marsh, director of long-range planning for the Sarasota district, told a joint meeting of the Sarasota County School Board and the Sarasota County Commission on Aug. 29 that enrollment estimates showed “there will be no growth-related schools needed in the next five years.”

Demographic projections shown to the two boards indicated that the number of residents age 18 and under was expected to make up 14% of the county’s total population in both 2020 and 2030, down slightly from the 16% level reported for 2010.

By the 2016-17 school year, he said, enrollment was expected to increase only to 42,481. Out of that number, Marsh said, the proportion of students in charter schools was projected to rise to 15%, compared to the current 12% level.

Since the 2003-04 school year, the highest enrollment has been 42,460, district figures show. That number was recorded in the 2006-07 school year, at the height of the building boom.

The chart below, presented during the joint County Commission/School Board meeting, shows county population and student enrollment figures from 2001 through 2010: 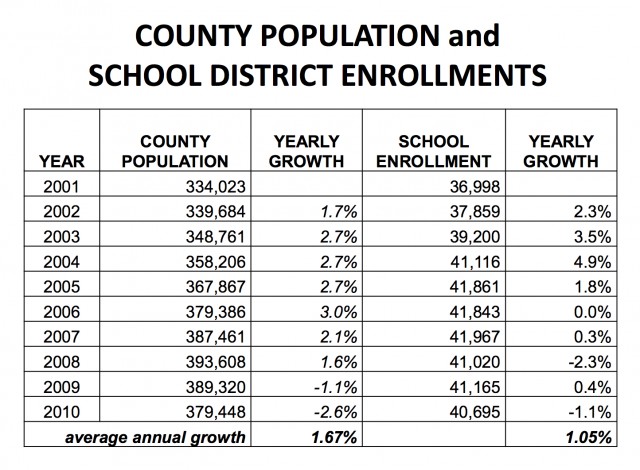