Conservancy will have to provide ‘implementation plan’ for each phase of project, with financing details, before any construction begins

It took almost three hours, including comments from 20 speakers — a mix of pro and con.

Finally, on April 15, the Sarasota City Commission voted unanimously to approve a partnership between the city and a nonprofit organization that will oversee development and manage 53 city-owned bayfront acres. Cheers rang out in the Commission Chambers at City Hall.

The agreement will be in effect for an initial 15 years, with two automatic renewals of 15 years each.

The motion by Commissioner Hagen Brody, seconded by Commissioner Shelli Freeland Eddie, incorporated final recommendations for tweaks of the document, which involves the Bay Park Conservancy (BPC). The Conservancy is the successor to the Sarasota Bayfront Planning Organization, which spent more than $2 million in private contributions to hire a Boston-area firm Sasaki to design the master plan for the bayfront park.

“I think it’s a great start to a very fruitful partnership,” Brody said of the agreement.

“I think what we’re doing here is a tremendous opportunity,” Mayor Liz Alpert added, noting that one of the speakers during the meeting had characterized The Bay as a “once-in-a-lifetime opportunity.” The Bay, Alpert pointed out, will be “a gathering place for all members of the community and be a destination for people from the region and the country.”

During the April 15 meeting, both Vice Mayor Jen Ahearn-Koch and Freeland Eddie asked numerous questions about facets of the agreement, ranging from financial details to allowing city commissioners to appoint voting members from the three city districts to the BPC board. (Two non-voting city representatives will be on the board, Jennifer Compton, an attorney who is the BPC secretary, pointed out. The commission will appoint one, while the city manager will appoint the other person, the agreement says.)

“The support for this project is enormous,” Ahearn-Koch told Compton and A.G. Lafley, startup CEO of the BPC. However, she continued, “If I didn’t scrutinize [the proposed agreement], I think that would be irresponsible of me as an elected official …”

Fournier explained in depth that the City Commission will have the authority to approve what he called “implementation plans” before construction of any phase of the project can commence. Those documents will include details regarding financing, he and the BPC representatives stressed.

Among Fournier’s revisions the commission accepted on April 15 was the affirmation that “nothing in this Agreement shall require the City Commission to approve an Implementation Plan or Implementation Agreement proposed by the BPC.”

Additionally, Section 4 says, “This Agreement shall not obligate the City to make any financial obligations, except for the direct or indirect costs of the obligations enumerated in Section 5 below.”

Among the latter, No. 8 says, “City shall maintain its existing responsibility to provide all infrastructure to the site, including … streets, sidewalks and infrastructure for water and sanitary sewer services.” Additionally, No. 10 calls for the city “to provide municipal services and routine maintenance to the site, including by way of example and not [limited to] trash pick up, utilities, landscape maintenance and litter control.”

The Conservancy, Fournier continued, “will endeavor to fund the park attractions and amenities,” such as the proposed kayak launch, the recreational pier and perhaps a sculpture garden. Those are the types of features one would expect private funding to cover, Fournier added.

As an illustration, Fournier noted that if Mayor Alpert were to give the BPC “a very generous donation,” her preference for its use likely would be the Liz Alpert Center for the Performing Arts instead of the Liz Alpert Sanitary Sewer Force Main.

Fournier also pointed out that the BPC considers construction of a parking garage on the 53 acres a typical municipal responsibility. However, Fournier emphasized, it will be up to the City Commission to decide “if there’s going to be a parking garage.” Even though the master plan concept calls for an underground facility, he continued, the commissioners could approve an off-site parking garage or build an aboveground facility “that’s nicely landscaped.”

Lafley, the Conservancy startup CEO, said the BPC expects the city funding for the first phase of the project — which will encompass about 10 acres on the southern part of the bayfront — to be between $1 million and $2 million. The figure, he added, will represent about 10% of the overall expense. “That is a prettygood deal. … One city dollar attracts 9 dollars,” he said, and $7 or $8 of the latter would come from private sources.

He predicted that it would take three years to complete Phase One, which will include a recreational pier, a pedestrian bridge across U.S. 41 at the Boulevard of the Arts intersection, enhancement of the mangroves in that area, and parking lots and food and beverage services, according to the concept designed by Sasaki.

It could take up to 20 years to complete the entire project, he pointed out, though the goal is to have all the park finished within the first 15-year term of the agreement.

During the March 18 City Commission meeting — the last time The Bay agreement was discussed — Lafley emphasized that it was impossible to know what the total cost of The Bay would be.

On March 13, when Bill Waddill, managing director of the BPC, discussed The Bay with the County Commission, he predicted the expense would range between $100 million and $150 million. Another $250 million has been estimated as the cost of a new performing arts facility to replace the Van Wezel. However, Waddill told the County Commission that the Van Wezel Foundation is in charge of that part of the project.

“We’ve never spent a single dollar we did not have in the bank, and that’s precisely how we plan to move ahead,” Lafley said during the April 15 City Commission meeting. “We will bring you an implementation plan with a funding plan … before we begin the actual work.”

The goal for The Bay, Lafley emphasized, is a park that is “open, accessible and available to all, free to all, for a whole range of recreation, and arts and culture, educational [and other opportunities] … whatever [the members of the public] want to do in that park.”

Lafley added that the prospect of establishing a tax-increment financing (TIF) district to help pay for the bayfront amenities still is under consideration. Such a funding mechanism would be an initiative of the City and County of Sarasota.

Additionally, all aspects of the work will have to comply with the city’s zoning code and other city regulations, Fournier pointed out, and all of the Conservancy’s actions will have to be handled in the public. The BPC “really has no choice,” Fournier added, about abiding by the provisions of the state’s Sunshine Law and Public Records Act.

Another amendment approved for the agreement this week says that not only the BPC but also “any committees created by BPC shall function subject to the Sunshine Law and … comply with the requirements of the Sunshine Law.”

Finally, Fournier explained, the agreement provides for either party to terminate the partnership without having to pursue litigation.

All in all, Fournier pointed out, “The city hasn’t really ever undertaken anything like this before.”

A series of questions

Among the questions Vice Mayor Ahearn-Koch asked was what measures would be in place to ensure the taxpayers “don’t have to pick up the slack” if the BPC runs out of funding partway through a phase.

Compton, the BPC secretary, emphasized again that the commission will have to approve each implementation plan, with associated funding, before construction begins. “We’re not trying to get anybody to approve the next 15 years.”

The worst-case scenario, Compton continued, would be if the BPC could not raise the money for future phases, “It’s still a park, so there’s not a halfway-built building …”

When Ahearn-Koch raised the issue about the city representatives on the BPC board, she asked her colleagues to support her in insisting that one-third of the board members represent the three City Commission districts.

(The agreement says the BPC board will have seven to 15 members.)

“I think that this is the absolute minimum we could do,” Ahearn-Koch said, noting that the additional city representation would build trust among community residents about the actions the BPC takes.

Ahearn-Koch referred to a comprehensive document produced by the Trust for Public Land regarding conservancies. It suggests local government representation on conservancy boards, she pointed out.

Compton stressed that “every single decision” about the construction of The Bay will come back to the City Commission for final approval, so all residents of the city will be represented when the commissioners make their decisions.

And while she noted that it was a matter of happenstance, Compton pointed out that every zip code in the city is represented by either a resident or business owner already on the BPC board.

“Do you think that the citizens of Sarasota have not been represented to this point?” Compton asked. She was referring to Sarasota Bayfront Planning Organization documentation of more than 50,000 people having been engaged in the meetings and surveys the SBPO conducted in the creation of the master plan for the Bay.

Ahearn-Koch replied that she was talking about the next 45 years, covered by the agreement.

“We can respectfully disagree,” Compton told Ahearn-Koch after noting the BPC’s own research about board makeup determined that extra local government representation was not advisable. 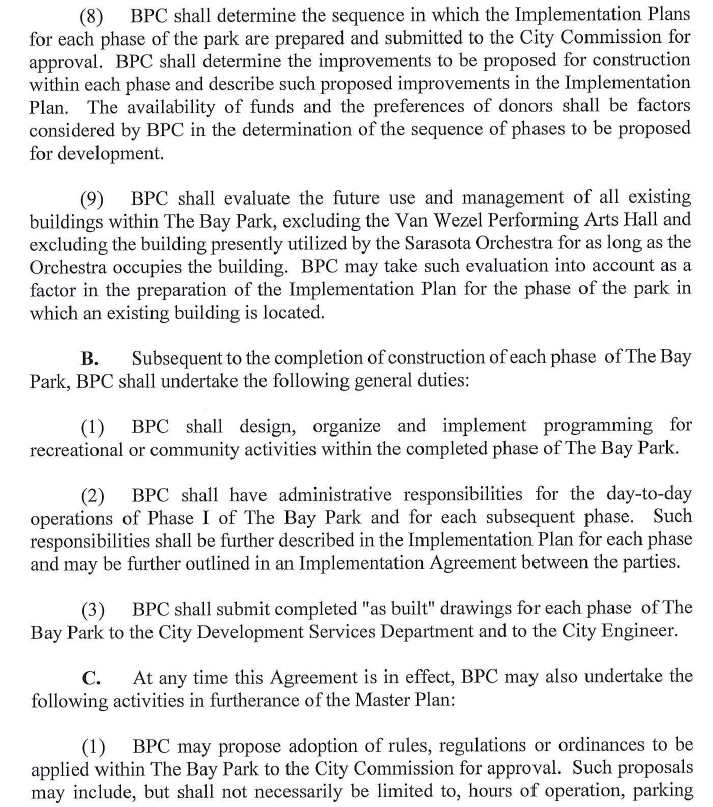 Later, Startup CEO Lafley did point out that the BPC already is planning to appoint an advisory board, whose establishment is provided for in the agreement. “It will meet regularly to advise the Conservancy” and the design team, he added.

“They can make [the advisory board] as large or as small … as necessary,” Mayor Alpert pointed out, and it can represent people from all areas of the city.

“I don’t think we should meddle with their board,” Commissioner Brody said. “Ultimately, we have more authority,” he pointed out of the city commissioners, referring to the implementation plans. He also talked of “these people of [the BPC board with] great experience and, I think, accomplishment,” who have “earned a lot of respect” in the community.