The Feb. 20 motion made by Angus Rogers of Sarasota, developer of the Art Ovation Hotel, called for the memorandum of understanding “to hold Mote accountable” for spending funds not only to market the aquarium but to promote Sarasota County as a whole as a tourist destination.

Before the vote, Rogers and Kim Matlock of Matlock Digital Group in Venice, who seconded the motion, agreed to an amendment suggested by Kathleen Lehner, president and CEO of the Venice Area Chamber of Commerce. That called for county staff to work to incorporate facets of the memorandum of understanding (MOU) that Sarasota County and the Baltimore Orioles approved in the deal that brought the team to Sarasota for Spring Training 10 years ago.

As Virginia Haley, president of the county’s tourism office — Visit Sarasota County — explained, that MOU ensured that she and her staff would have ample opportunities, courtesy of the team, to market Sarasota to Orioles fans in the Baltimore/Washington, D.C. area.

Commissioner Charles Hines, who chairs the advisory board, abstained from the vote. Nine of the 13 members appointed to the board were present for the Feb. 20 meeting.

On Jan. 15, the County Commission pledged $20 million to Mote for the aquarium project. During the Tourist Development Council (TDC) meeting last week, Hines explained, “We would only borrow that money as last money in. … We’re not front dollars.” Mote has to raise the rest of the funds for the project before the county provides the $20 million, he stressed.

Nonetheless, in advance of the commission’s decision last month, advocates for Visit Sarasota County (VSC) argued that it would be unfair to take more money out of the county Tourist Development Tax (TDT) — or “bed tax” — revenue account allocated to VSC’s promotional efforts to repay the loan. County staff had proposed up to 5% a year be set aside from that account to repay the 30-year loan. Staff has estimated the interest rate at 3.44%, Kim Radtke, director of the Office of Financial Management, explained on Jan. 15 and again — to the TDC members — on Feb. 20.

Annual debt service would be about $1.1 million, she added, putting the total borrow at $21 million.

In recent years, Haley has pointed out, Visit Sarasota County’s promotional dollars already were cut twice. The first time was to cover debt service for a loan to help pay for construction of the new Atlanta Braves Spring Training facility in the West Villages near North Port. The second time was to cover renovations at Ed Smith Stadium in Sarasota, where the Orioles conduct Spring Training.

The county was obligated to pay for the Ed Smith Stadium repairs because of an agreement with the Orioles, staff explained in the fall of 2018.

Yet, Commissioner Hines told the TDC members on Feb. 20, “The commission had a realistic debate on how to make this [aquarium project] happen.” The fact that Mote’s base of operations is in Sarasota County was what he characterized as “the tipping point.” If an outside entity had proposed such a facility and sought county funding support, he indicated, the board likely would not have agreed to the request.

North Port City Commissioner Jill Luke asked whether staff had considered any of the Tourist Development Tax (TDT) funds other than the promotional account for the Mote deal.

Radtke replied that none of the revenue allocated to beach maintenance and beach renourishment could be used, because of the need for that money for those purposes. Other TDT revenue is set aside for debt service linked to the two sports stadiums and to the Suncoast Aquatic Nature Center Associates (SANCA), which manages Benderson Park for the county, she continued; those accounts could not be touched, either.

Staff did consider the potential of reallocating part of the TDT revenue that is used for grants to county arts and cultural organizations, to draw tourists, she said. However, the County Commission ruled out that option.
Hines also noted that he and his commission colleagues refused to commit any property tax revenue to Mote, feeling that would be inappropriate.

The funds that go to Visit Sarasota County for its promotional efforts are “up to our discretion,” Hines added. “There’s no magic number.”

Moreover, Hines pointed out, the TDT revenue “has significantly gone up over the past few years, so everyone’s getting more [of it].”

As a result, he continued, Visit Sarasota County could end up with as much promotional money as it has been receiving out of the TDT funds, even with the new allocation to the Mote project.

Radtke further noted that staff has been working on the assumption that the bond issuance would occur in the 2021 fiscal year — which will begin on Oct. 1, 2020 — and that the debt payments will start in the 2022 fiscal year.

In response to a question from Hines, Radtke said the TDT revenue had an average growth rate of 9.6% over the past 10 years. The average for the past five years is 6.6%, Hines noted, referring to another slide Radtke presented to the advisory council.

Radtke said it is possible, given the potential for TDT revenue growth to continue, that the funds taken from Visit Sarasota County’s promotional fund would be decreased by 4% instead of 5% in the 2022 fiscal year.

A different take and some proposals

Countering Radtke’s optimism, Haley of Visit Sarasota County told the TDC members that research undertaken for her office predicted much slower climbs in the TDT revenue over the next several years. “Because we have increased hotel supply,” she said, and less promotional money, VSC projects a $2% annual increase.

(A Tallahassee consultant working with Visit Sarasota County told the TDC members in January that the county had gained 41% more hotel rooms since 2016. All those extra rooms have led to hotels lowering their average room rates, the consultant — Phillip Downs of Downs & St. Germain Research — which means less TDT revenue.)

Further, Haley said on Feb. 20, “We’re still not back to where we were before red tide,” referring to the bloom that began in the fall of 2017 and extended into early 2019. “The rosy scenario [Radtke presented] is not likely,” Haley added.

Still, Haley continued, “Our job is going to be to prove our research company wrong, of course.”

Nonetheless, Haley talked of options for the county agreement with Mote to help make up the decline in the promotional funds.

She then noted the MOU with the Orioles, which equates to about $1 million each year for marketing. Thanks to that agreement, she said, the Baltimore/Washington, D.C. area consistently is among the top three or four from which people come annually to Sarasota County. Before the MOU was in place, Haley noted, that metropolitan area was not even in the top 10 for visitor origins.

Additionally, she said, when county staff drew up the agreement with the Atlanta Braves for that team’s move to North Port, the Braves offered a number of significant marketing opportunities for VSC, including a Sarasota Day in Atlanta during the regular baseball season.

At that point, Haley noted the list of suggestions Visit Sarasota County had provided the TDC members as a means of helping the organization recoup some of the marketing assistance it would lose with the lower allocation of promotional funds.

First on that list, Haley said, is the proposal that VSC “be provided prime signage throughout the Aquarium facilities and the outside of Aquarium facilities” at a $20-million sponsorship level. “The exact locations for the signage to be determined” after the design of the facility has been completed, the document says.

No. 2 calls for a VSC “visitor kiosk and video display in the main lobby of the Aquarium at Mote’s expense,” with VSC providing trained volunteers to staff the kiosk “at peak times,” along with “all needed collateral for distribution.”

No. 3 proposes that Downs & St. Germain representatives be allowed access to the aquarium to conduct surveys of visitors. “Information and insights from such surveys will be shared with Mote for [its] benefit,” the document notes.

No. 4 says, “Visit Sarasota County is to be the exclusive destination sponsor of Mote Aquarium facilities.”

“No other destination would be allowed to have significant signage,” Haley stressed to the TDC members. For example, she said, if she were driving by the aquarium on Interstate 75, she would not want to see a sign on the property promoting St. Petersburg and Clearwater. “That would give me a heart attack.” 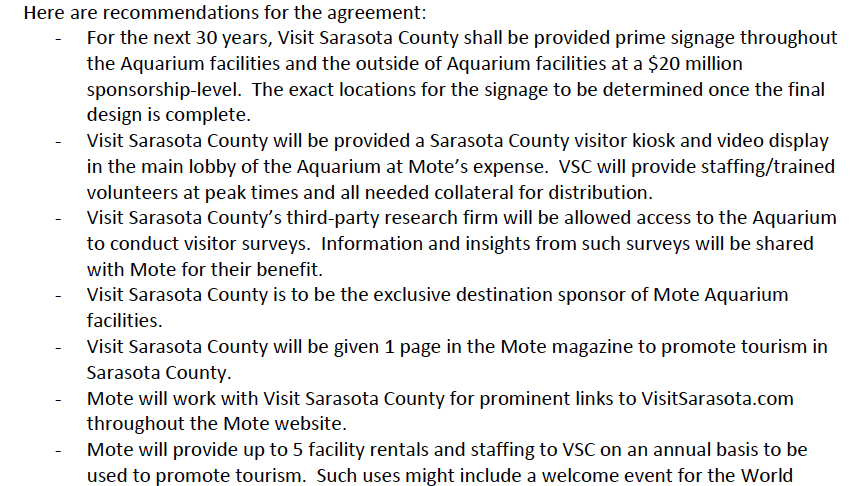 Yet another item on the list proposes that Mote allow VSC up to five free rentals of its facilities per year for the promotion of tourism. For example, Haley explained, if a major rowing event were taking place at Benderson Park, the opening ceremony could be held at the aquarium.

Hines told the TDC members he feels his commission colleagues will be very open to their recommendation and Haley’s proposals “and work [them] into the deal with Mote.”

“I’d love to see that we have some specificity in [the agreement regarding] more destination marketing to help bring visitors to the area, not just to [the aquarium].”

“That is exactly the intent” of the VSC proposals, Haley responded.