Tourist development tax revenue continues to be the shining light in Sarasota County’s finances so far this year, as evidenced again by the July report from the county’s Office of Financial Planning.

The TDT revenue was up 16.7% over the amount that had been projected for July, the report shows. Total TDT revenue so far this year is up 18.6% over what was budgeted.

Virginia Haley, president of Visit Sarasota County, told The Sarasota News Leader this week that her office had continued strong TV and online advertising campaigns to promote the area this summer.

June, July and August typically are the time of year when Sarasota County sees tourists coming mostly from other parts of Florida, she said. However, she added, “We had, for the month of June, an 18% increase in European visitors.”

The number of Canadian visitors was up 11% in June, she said, the latest month for which she had figures. “We’ve really been working Canada hard,” Haley said, including a staff trip last fall to promote Sarasota County to Canadians.

According to the Sarasota County Tax Collector’s Office, the city of Sarasota continued to edge out Siesta Key for the top location for TDT collections through June, the last month for which that office’s figures were available.

Sarasota County was a distant third, with 16.54% of the TDT collections.

The only negative figure for county finances in July, according to the finance report, was gas tax revenue, which has been trending lower over the past months than the figures the finance staff had projected.

Year-to-date, the gas tax revenues are down 4%.

Among the other positive news in the report:

• Utility revenues were up 12.5% for June, the most recent month for which figures were available; for the year, they were up 8.1%.

Botelho pointed out that the general fund through July had about 2.5% more in funds than the budget had called for at that point, while all major revenues were tracking 5% ahead of the figures budgeted.

The following chart, from the Sarasota County Tax Collector’s Office, shows the tourist development tax collections by location so far this fiscal year: 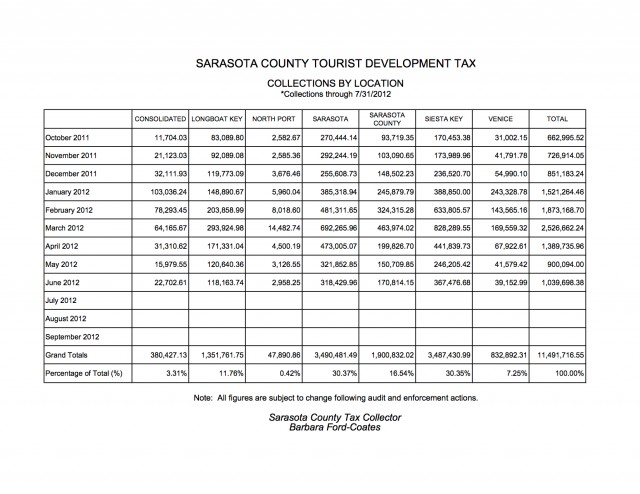