Three times on Sept. 9, a representative of the Siesta Isles Association Board of Directors asked the Sarasota County Traffic Advisory Council (TAC) to allow changes in the neighborhood to make conditions safer for the residents.

And three times, the council members voted unanimously to support staff’s recommendations, not what the Siesta Isles board was seeking.

“We’re trying to slow things down and make it less convenient” for drivers to cut through Siesta Isles on their way between Siesta Public Beach and Siesta Village “when traffic gets queued up on Midnight Pass Road and Beach Road,” Tony Romanus explained.

The neighborhood has 297 single-family homes, Amjid Hussain, an engineer with the county’s Traffic Engineering & Operations Division, told the TAC members. “There are no sidewalks or bike lanes.”

“Every single thing we have asked for, we have been told, ‘No,’” Romanus added.

The county no longer has a program that enables community associations to install traffic calming devices, he pointed out.

“In the meantime, we have 1,400 cars a day in season blazing through the neighborhood,” Romanus said. “You’re my last hour for hope,” he told the TAC members.

The closest Tony Romanus came to success was during the first hearing, when the TAC members approved a reduction in the speed limit on Glebe Lane from 30 mph to 25 mph. The Siesta Isles Association board had sought a switch to 20 mph.

During the second hearing, which focused on a petition to reduce the speed limit in Siesta Isles itself from 25 mph to 20 mph, Hussain pointed to data that county staff had collected in the neighborhood on a Wednesday and a Thursday. He said the results indicated that no change was necessary, based on federal traffic standards.

Romanus countered, “Siesta Key Beach and [Siesta Village] are much busier on weekends.”

Nonetheless, the TAC sided with staff.

At the conclusion of the final hearing, TAC Chair Becky Ayech expressed her sympathy with the neighborhood association’s efforts to get multi-way stop signs installed at four intersections, so GPS devices and apps such as Waze no longer would recommend drivers cut through Siesta Isles. Yet, acting on the standards in the Manual on Uniform Traffic Control Devices (MUTCD) — as staff had advised — Ayech joined her colleagues in denying the request.

If the multi-way stop signs were erected at the four intersections noted in the Siesta Isles application to the TAC, Romanus had explained, GPS software and the apps would be less likely to direct traffic through Siesta Isles. 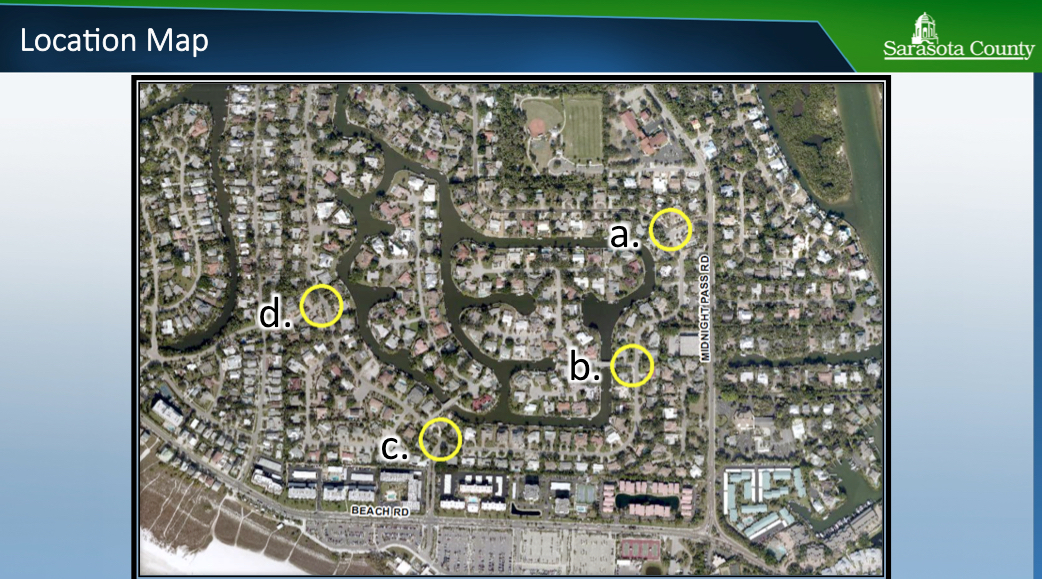 The intersections are as follows:

Hussain again pointed to the criteria staff uses to analyze whether a request meets the standards for approval under the aegis of the MUTCD. In this case, he continued, none of the four intersections where the Siesta Isles Association (SIA) board sought the multi-way stop signs earned enough points under those criteria for the signs to be erected.

Moreover, he continued, “If we install unwarranted stop signs, angle crashes increase. Drivers ignore [the signs]. Drivers drive based on their perception [of the conditions on a road].”

Thus, Hussain added, staff had to recommend that the TAC deny the requests.

After TAC member Mary Glidden-Williams made the motion to deny the installation of the stop signs, and Vice Chair Bruce Lorie seconded it, Chair Ayech told Romanus, “Sir, I am so sympathetic with what you are saying … I have gone through the exact same thing where I live.”

In her situation, Ayech continued, the Waze app began sending people through Myakka River State Park and the Old Miakka Community, so drivers could avoid congestion on Fruitville Road. The traffic count went from 600 to 1,000 vehicles a day in her community, she added. “It was horrible.”

A vote to deny the request for the stop signs, she continued, “is what the law requires … The County Commission has said, ‘No, you can’t use stop signs for traffic calming devices.’ I don’t agree with them.”

Ayech told Romanus, “I wish that I had some thing that I could offer you as a solution. Unfortunately, I don’t.”

Perhaps he could try contacting the company that created Waze, she said, to plead his case.

Then Glidden-Williams pointed out, “I’m the bad guy who made the motion.” Therefore, she said, she wanted to offer a comment.

Glidden-Williams explained that she lives in a gated community that also has a gate for construction workers. “Google was continuously directing people to the construction gate.”

Finally, she said, representatives of her neighborhood contacted Google and were able to talk with some of its employees “at great length” about the problem. “They fixed it,” she added of Google employees. “It’s just a thought.”

In a statement he issued to The Sarasota News Leader after the hearing, Romanus pointed out that the petitions he presented on Sept. 9 were the result of two years of work by a committee of the Siesta Isles Association. “We’ve had quite a few interactions with County employees. We have had some success. County staff has improved some signage in our neighborhood and on Beach Road. They also cleared some trees inhibiting visibility and pressed a resident to clear some plants from their yard,” he wrote. “All this is helpful.”

Nonetheless, he continued, “We’ve also had a lot of frustration. We’re laypeople who are looking for solutions. We typically don’t know what alternatives exist to solve the problems we encounter. Other than the successes noted above we’ve not been given solutions. As I type this, after two years of work, the County is not offering any solution to our primary problem: too many vehicles speeding through our neighborhood. “Time will tell if the Board of County Commissioners changes that.”

Ayech, the TAC chair, did point out on Sept. 9 that Romanus would be able to present his petitions to the County Commission. The News Leader was unable to learn, prior to its deadline this week, when those hearings would be scheduled. Typically, they are held several months after the TAC conducts its hearings.

Romanus did add in his email to the News Leader, “Our interaction with Sheriff Tom Knight and his Siesta Key team has been excellent. We could tell there was a desire to find out what we were trying to accomplish and they quickly did their part.”

The Sheriff’s Office conducted an eight-day traffic study in the neighborhood in March 2018, Romanus told the TAC members. Its findings found much higher traffic counts and far greater speeds than the county study, he pointed out. “Forty-eight percent of the cars they clocked were speeding,” he told the TAC, “and a handful were over 65 mph.”

Neighborhood opponents of the petitions

The Siesta Isles Association also lacked full support of residents for its requests, especially those regarding the stop signs, as indicated by public comments during the Sept. 9 meeting.

However, two people did speak in favor of the multi-way stop sign proposed at Shadow Lawn Drive and Contento Drive.

Sandy Palmer pointed out that drivers would see the sign right before they approach what Romanus had referred to as a dangerous “S” curve. People who leave Siesta Public Beach and then enter the neighborhood do speed, Palmer added. That extra sign would prevent them from gathering speed as they entered that curve, Palmer said.

Marilyn Romanus, Tony’s wife, told the TAC members, “I live here year-round. I walk my dog every day. … To me, having people stop before they get to that ‘S’ curve is very important. … I have been hit almost twice,” she said, and her dog had come close to being struck by vehicles.

However, Kim Langedyk read from the MUTCD: “Yield and stop signs should not be used for speed control.”

She told the TAC members that of all the proposed multi-way signs, the one she least would like to see installed would be the one at Contento Drive. “On a bike,” she pointed out, “you’re more likely to not follow the stop sign. You’re actually creating more of a hazard,” she added, in that vehicle collisions with bicyclists could become more common.

Furthermore, she said she believes that if any driver enters the “S” curve at a speed greater than 15 mph, that driver is “in trouble.”

Jay Kryger, who said he lives in the house at the “T” intersection of Shadow Lawn Drive and Shadow Lawn Way, noted that he and his wife are in a unique position to observe the traffic flowing through there.

“Overall, we find that the people coming through that intersection do so at a reasonable speed [and] obey the traffic laws. … We aren’t seeing an excess of accidents in those areas, or injuries.”