About 12:53 a.m. on Feb. 19, officers with the Sarasota Police Department were dispatched to the intersection of North Gulfstream Avenue and Bayfront Drive in downtown Sarasota after someone reported that an individual had spray-painted “#MeToo” on the Unconditional Surrender sculpture, the Police Department reported.

When officers arrived, they found “#MeToo” in red along the left leg of the nurse in the sculpture, a news release said. “The red lettering covered the length of the nurse’s leg,” the release added.

Officers canvassed the area in an effort to locate spray-paint bottles, which might have yielded fingerprints; however, none was found, the release said. Additionally, during the canvass, no other objects were observed to have been defaced or spray-painted, the release noted.

No surveillance video available in the area captured the incident, the release pointed out, and no witnesses had been found as of the morning of Feb. 19. The Police Department had provided no further update before the publication deadline this week for The Sarasota News Leader.

It is believed that the incident occurred on Monday, Feb. 18, between midafternoon and evening, the Police Department release said. However, the exact time is unknown.

The damage estimate was more than $1,000, not only because of the large area the graffiti covered, the release explained, but also because of the expense of the resources necessary for the repair.

The City of Sarasota’s Public Works Department was notified of the damage, the release added.

Anyone with information about the incident is asked to call the Sarasota Police Department Patrol Division at 941-954-7025, leave an anonymous tip with Crime Stoppers by calling 941-366-TIPS, or by going online at www.sarasotacrimestoppers.com.

The incident in downtown Sarasota was reported within close proximity to the announcement of the death of George Mendonsa, the sailor on whom the male in the sculpture was modeled. In Mendonsa’s obituary inThe Washington Post on Feb. 18, reporter Harrison Smith described the genesis of the iconic photograph taken in Times Square in New York City, which was the basis for the Unconditional Surrender sculpture.

“When Japan’s surrender was announced on Aug. 14, 1945, George Mendonsa grabbed his date, ran out of a Rockettes performance at Radio City Music Hall and headed for a nearby bar in Times Square,” Smith wrote.

Mendonsa “was a Navy quartermaster on leave, dressed in uniform,” Smith continued. After Mendonsa had downed a few drinks, Harrison added, Mendonsa “began walking the streets, where he spotted a young woman in a white nurse’s outfit. Buzzing with joy, now jolted by a memory of the nurses who cared for his wounded comrades at sea, he put his arms around the woman, tipped her back and kissed her.”

“Wielding a Leica camera and looking for pictures, Alfred Eisenstaedt captured what became one of the most memorable images of the 20th century, a work of photojournalism that has since vaulted to the realm of art,” Harrison wrote.

“Formally known as ‘V-J Day in Times Square’ and more commonly called ‘The Kiss,’ the image was published two weeks later in Lifemagazine,” Harrison pointed out.

The #MeToo movement has been growing in strength over the past couple of years, as more and more women around the world have reported sexual assaults, sexual harassment and violent attacks that they kept secret at the times the incidents occurred. Many of them have cited a variety of reasons for their silence, including fear and shame. 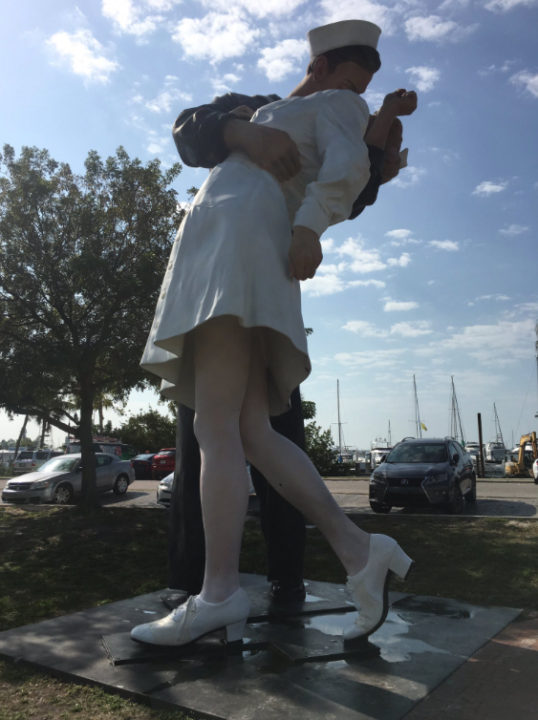 Unconditional Surrender has been a controversial feature on the bayfront since the Sarasota City Commission agreed many years ago to allow its placement there. From the early days, artists and supporters of the arts decried its value as a sculpture. Nonetheless, it has proven to be one of the most popular tourist destinations in the county, according to research undertaken for Visit Sarasota County in the past couple of years. Veterans and active military personnel — and their family members — are among the many people who have been drawn to Unconditional Surrender.