Among issues on which board members could not find consensus on Jan. 19 was inclusion of amendment recognizing virtual meeting participation

During their first meeting of the New Year, the majority of the Sarasota city commissioners agreed that they wanted to shift their meetings from a 1:30 p.m. start on Mondays — with a dinner break and resumption at 6 p.m. — to an entirely nighttime schedule.

However, while the scheduling change is still moving ahead — with a Feb. 1 start — the commissioners have yet to agree on multiple other details in regard to how they conduct their meetings. After approximately 35 minutes of discussion on Jan. 19, they concurred, by consensus, to ask City Attorney Robert Fournier to work on another draft of a revised Rules of Procedure to address those remaining issues.

Commissioner Liz Alpert was the first to say that she did not want to approve any proposed changes that evening that were not already provided in the document Fournier had included in the backup agenda material. “I would want to see what the exact changes are,” she added, before casting a vote on them.

The only amendments to the Rules of Procedure that the commissioners formally approved that night call for the regular City Commission meetings to begin at 6 p.m. and end at 10 p.m. on the first and third Monday of each month; that agenda items “that are anticipated to generate a greater amount of public input or to require more time for Commission discussion” be set for the first and third Tuesday after the first and third Monday; that if a regularly scheduled meeting falls on a legal holiday or an election day, “such meeting shall be held on the following day or on the following two days as may be applicable”; that the commission will hold a goal-setting workshop in January of each odd-numbered year; and changes will be made to the order of  business, as proposed by the Office of the City Auditor and Clerk. The latter adjustments generally were designed to reflect the lack of an afternoon session.

Commissioner Jen Ahearn-Koch cast the lone “No” vote on the motion Arroyo made, which Commissioner Kyle Scott Battie seconded.

When Mayor Brody asked whether the next draft of the Rules of Procedure could be ready by the commission’s Feb. 1 meeting, City Attorney Fournier replied that he was not certain about that timeline, as the Feb. 1 agenda review was set for the following day.

(The Sarasota News Leader did see in a city email blast that a Feb. 1 agenda item was scheduled, as of Jan. 28, regarding the consideration of that new draft.)

Among the issues that sparked debate on Jan. 19 is whether all five commissioners must be present in Chambers at City Hall in downtown Sarasota for every meeting. Vice Mayor Arroyo insisted that an Executive Order Gov. Ron DeSantis signed on March 20, 2020 necessitates the physical presence of each board member.

However, Commissioner Ahearn-Koch, who has been participating virtually in the sessions since Brody won election as mayor in November 2020, asked that the revised Rules of Procedure be clarified to allow for members’ participation via technology such as Zoom, or by telephone.

When she offered her proposal, Fournier told her that he could include such language in the document, as long as the amendment was consistent with the Florida Statutes, which prevail over local meeting rules.

Commissioner Alpert noted, “‘Present’ is a subjective term,” referring to Rule V.B. of the city’s Rules of Procedure.

Alpert told her colleagues that she believes language indicating virtual attendance should be included in the rules. “That’s probably important, so there’s no question.”

Yet, Arroyo responded, state guidelines pre-empt certain actions. He referred to DeSantis’ Executive Order 20-69, which was issued as the novel coronavirus pandemic’s effects first were being felt in the state. The order points out that, on March 19, 2020, “Attorney General Ashley Moody delivered an opinion to [DeSantis] indicating that certain provisions of Florida law require a physical quorum be present for local government bodies to conduct official business, and that local government bodies may only conduct meetings by teleconferencing or other technological means if either a statute permits a quorum to be present by means other than in person or that the in person requirement for constituting a quorum is lawfully suspended during the state of emergency …” 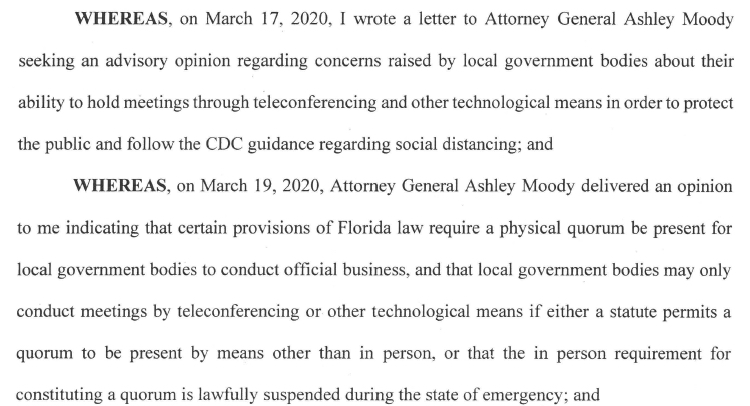 “You have to be physically in the meetings,” Arroyo told his colleagues, “which is what I’ve been arguing and emailing that we are in violation of.”

Earlier that day, Arroyo continued, he was told that city staff had concerns about a quorum’s being present for the Jan. 19 meeting. He then said he hoped that Commissioner Alpert — who was participating virtually, too — was feeling better.

Nonetheless, Arroyo added, “I had to come. I have stitches in the back of my head; I actually have blood that they can see because of a procedure. But I had to come; otherwise, this meeting would not have happened. … That is something that really concerns me.”

Therefore, Arroyo said, he was not in favor of adding any language in the Rules of Procedure to permit commissioners to participate in sessions virtually or by telephone.

Another issue that arose early in the discussion focused on the amount of time commissioners are allowed to ask questions and make comments on topics under consideration.

City Attorney Fournier explained that that section is consistent with Robert’s Rules of Order, which is the basis for the city’s Rules of Procedure.

“Generally, it’s recognized that the presiding officer has general authority to keep the meeting going on,” Fournier continued, adding, “And I know Mayor Brody wants the predictability and the certainty [of time limits] …”

However, Fournier noted, no language in the city’s rules provides guidelines about time limits for other facets of city business.

“My preference is to set predictable time limits in consultation with [City Manager Marlon] Brown, who will consult with the commissioners,” Brody said, referring to advance planning for specific agenda items.

“I’ve had nothing but positive feedback from the community,” Brody added, in regard to his efforts to keep discussions from running long. “I’m feeling much more comfortable with the cadence and the schedule and the predictability … that we’re bringing to the commission … I’ll just kind of go [out] on a limb here and say I think the discussions have been very good and structured.”

While she said she appreciated Brody’s efforts to try to prevent meetings from running late into the night, Commissioner Ahearn-Koch added, “I really have to wholeheartedly disagree. I don’t think there are many times when we are going to be needing to ask for more [time] than what [Brody has been allowing]. … But I still find it very, very difficult for me to do my job when I am going to be pigeoned on 15 minutes to ask a question and receive an answer.”

Sometimes staff has to take the time to find an answer, she pointed out.

Moreover, she continued, in advance of quasi-judicial public hearings, “We’re not supposed to do independent research and we don’t know what’s going to be presented to us.” The point of quasi-judicial proceedings, Ahearn-Koch noted, “is you make your decisions based on what’s presented during the public hearing, so you can’t possibly know what’s going to be brought up. … I think it’s my job to ask those questions if I feel like it’s going to help me make my decision.”

She added that she did not mind having the mayor suggest time limits on board members’ questions, “as long as it’s flexible.”

Quasi-judicial hearings are akin to court proceedings: Commissioners are to listen to the evidence and testimony and then decide whether the applicant’s request complies with city policies and regulations and, therefore, should be approved on the basis of the facts presented.

City Attorney Fournier concurred with Ahearn-Koch about the need for flexibility with quasi-judicial hearings, “because they do have to be conducted differently.”

Mayor Brody told Ahearn-Koch that he understands the facets of quasi-judicial proceedings. Nonetheless, Brody continued, “I still want to be able to have reasonable time limits [on them].” He said his understanding is that, as mayor, he has the flexibility to extend time limits as needed.

Other points for consideration

Further, Ahearn-Koch called for the amended Rules of Procedure to include the potential for members of the public to address the commissioners via virtual technology and to submit video statements in advance of public hearings, as Vice Mayor Arroyo proposed during the commission’s Jan. 4 discussion.

Yet another topic Commissioner Ahearn-Koch raised regards whether the 10 p.m. conclusion for meetings is a “hard” restriction. “Are we able to extend the meetings?”

“I think that’s up to what the commission wants to do,” Fournier replied. The issue is similar, he continued, to the board members’ handing of the previous, 4:30 p.m. conclusion for the afternoon sessions. Some days, Fournier noted, members were agreeable to extending the meeting, given how a discussion was proceeding. At other times, he added, board members wanted to wrap up their opening session at 4:30 p.m., with the evening session ahead at 6 p.m.

“So I think you’d have some discretion,” Fournier told Ahearn-Koch.

Finally, Ahearn-Koch asked that language make it clear that speakers who address the commissioners on random topics at the start of each session be allowed to do so only on one day, not both, as each Tuesday meeting essentially will be a continuation of the meeting conducted on Monday.

The other commissioners agreed with Ahearn-Koch’s suggestion.

Fournier responded that that concern could be resolved by eliminating the latter part of Section XI.C. in the Rules of Procedure, which says, “Persons addressing the Commission shall not be permitted to split their time between the afternoon portion and the evening portion of a Regular Meeting agenda.”