In conjunction with the commission’s July 12 approval of $1,989,700 in the 2018 fiscal year for 39 projects that will be presented by 37 community organizations, Detert and Hines both pointed out that in years past, personal connections and pressure seemed to lead to the same arts and cultural groups continuously winning the county’s grants.

Addressing Jim Shirley, executive director of the Arts and Cultural Alliance of Sarasota County, Detert said, “Ten to 20 years ago, the local arts got funded based on everybody’s personal pet project. … So you had your groups that were kind of ‘flavor of the year.’ This association’s able to rank, screen and recommend funding to us so that it’s a more fair, orderly process, not based on … cronyism, frankly.”

She told Shirley, “I think you do a great job in the community. … I would just say, ‘Keep up the good work.’”

When he first joined the County Commission, in 2012, Hines said, he recalled people phoning the commissioners representing their districts and then appearing in person at the public hearing as they lobbied for specific organizations to win grants. “We would spend half a day trying to pick or choose. … It did not function well.”

Concurring again with Detert, Hines told Shirley, “I feel everybody under this process now gets a fair shake.”

The largest single amount approved for an FY18 grant — $93,780 — will go to the following projects:

Shirley thanked the board members on July 12 and then offered his appreciation to Fern Tavalin, manager of the grant process for the Alliance, who “has really helped develop a stellar program.”

Shirley also offered his public thanks to all the volunteers “who have spent countless hours” reviewing applications for the annual funding from Sarasota County.

The money for those grants comes out of Tourist Development Tax revenue, Tavalin and Shirley have pointed out in past presentations.

This year, according to a PowerPoint presentation Shirley had prepared for the County Commission, South County organizations will receive 13.6% of the total grant funds, or $270,673. One new South County entity is among the recipients: The Hermitage Artist Retreat, based in Englewood.

In past years, then-County Commissioner Christine Robinson raised questions about what she characterized as a disproportionate amount of the funding going to North County organizations. At the board’s request, Shirley worked to broaden his efforts to contact South County groups about the opportunity to apply for the grants.

On July 12, Hines said Shirley is “doing a great job with outreach,” making sure arts and cultural groups around the county are aware of the process and that they understand how to apply for support. “And they appreciate that,” Hines said.

One other new recipient for the 2018 fiscal year is Urbanite Theatre, which won $20,956 for its 2017-18 season. An organization must have been completed one full year of programming as a registered nonprofit in Florida — prior to the application deadline — to be eligible for funding, Shirley has explained.

During the July 12 County Commission meeting, Shirley pointed out that the funding goes to productions, exhibits and various types of programming designed to boost tourism in the county. He noted that the screening process for the awards is “very stringent.”

To win a grant, an organization has to provide documentation to the review panel regarding the artistic or cultural purpose of the event or production for which it is seeking funding; it has to demonstrate the program’s appeal to tourists; and it has to provide details making clear its “administrative competence,” according to material Shirley provided the County Commission in advance of its July 12 meeting.

Shirley also noted on July 12 that the Alliance annually produces, prints and distributes about 40,000 guides for visitor centers, hotels, condominium complexes and various public venues in an effort to promote arts and cultural events to tourists. 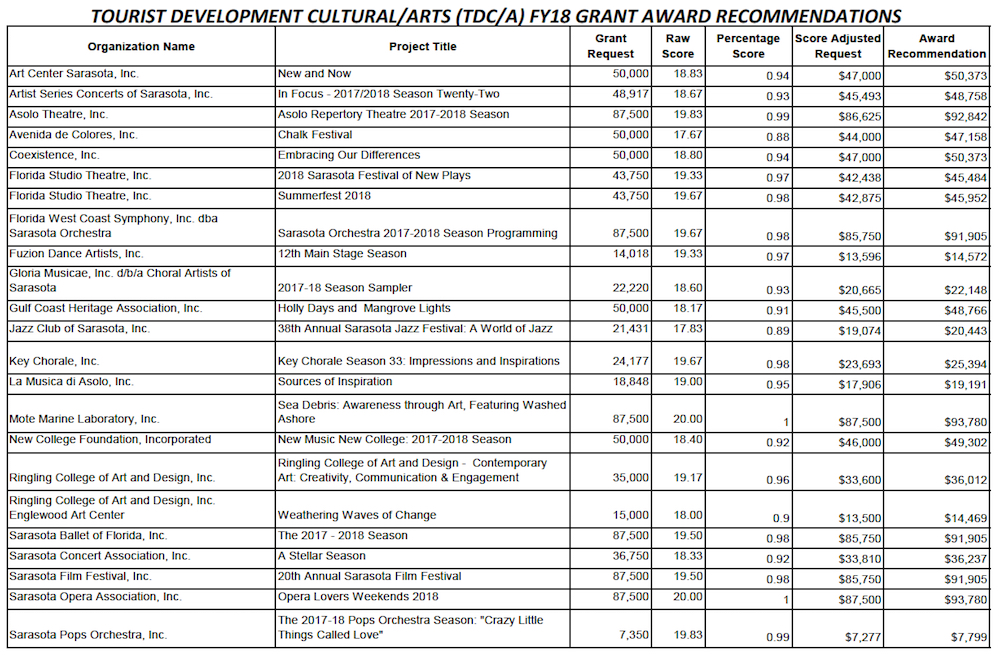 A slide in Shirley’s PowerPoint presentation noted, “The benchmark set by the National Assembly of State Arts Agencies for successful tourist attendance is 30%.” However, visitors in Sarasota County are projected to make up 57% of the attendance at programs funded by the grant program in the 2018 fiscal year, the slide said.