With a unanimous vote, the Sarasota County Commission has approved the recommended total award of $2,078,100 to arts and cultural programs in the community for the 2020 fiscal.

The funds, which are derived from a formula for spending proceeds of the county’s Tourist Development Tax (TDT) — or, “bed tax” — will be divvied up among 38 organizations, Jim Shirley, executive director of the Arts and Cultural Alliance of Sarasota County, told the commissioner on July 10.

The grants program’s goal is to draw tourists to the community, Shirley pointed out. The benchmark set by the National Assembly of State Arts Agencies for a successful level of tourist attendance is 30%, he said. The projected tourist attendance at the programs that will be funded in the 2020 fiscal year is 60%, he noted.

The grants total for the 2020 fiscal year is slightly higher than the $2,057,500 the County Commission approved in June 2018 for the current fiscal year.

The grants committee received 40 applications for funding for FY20, which will begin on Oct. 1, Shirley explained on July 10. Only 39 of them were eligible, he said; the 40th“is not based here,” so it did not qualify.

Altogether, 38 organizations will receive awards. The Ringling College of Art + Design will receive $73,745 for exhibitions next season at the Sarasota Art Museum — previously the Sarasota Museum of Art — in the renovated historic 1920s Sarasota High School, located at 1001 S. Tamiami Trail near downtown Sarasota. The college won another $13,622 for an exhibition at its Englewood Art Center, which stands at 350 S. McCall Road in Englewood.

The application submitted for the art museum pointed out that this will be the inaugural winter/spring season for the facility, which the Ringling College website says will open in December.

The application added, “A highlight of [the upcoming season] will be the work of globally renowned artist Vik Muniz, one of the world’s foremost contemporary artists, who has exhibited internationally and is represented in major museums around the globe.”

In February 2018, Shirley told members of the county’s Tourist Development Council that, over the five previous years, the number of applications approved for funding had risen from 31 to 37.

The Arts and Cultural Alliance staff, he continued during that meeting, actively encourages organizations that never have applied for the grants to do so. However, he said, “the hardship we run into” is that to be considered for funding, an organization “must be able to demonstrate that [it attracts] tourists to Sarasota County.”

Two of the grant recipients will be receiving money for the first time in the 2020 fiscal year, Shirley said on July 10. One of them is a South County organization, the Venice Institute for the Performing Arts. The other is ensembleNEWSRQ, which was approved for $4,923.

A note with the ensembleNEWSRQ application said the funds would be used for a program titled Olivier Messiaen’s Colors of the Celestial City. “All performers will be nationally or internationally acclaimed and of the highest professional quality,” the application added.

Information provided to the Arts and Cultural Alliance says that ensembleNEWSRQ is in its third season, having “gained a reputation for producing intrepid and daring musical masterpieces of the 20th and 21st centuries for enthusiastic audiences in Sarasota County. … A performance of this music is a rarity many communities never get the chance to encounter, and as both a sonic and visual feat, is truly best served live and in person.”

The Venice Institute for the Performing Arts will receive $20,922 for a program called Arts Live! in Venice, according to a notation about its award. The project description says that the group will “feature national, international, and local acts” in an effort to help Venice grow as “a destination for performing arts …”

Material the Institute submitted to the Arts and Cultural Alliance adds that, during its 2018-19 season, the organization “took audiences around the world and through time to experience diverse cultures and performances.”

Shirley pointed out to the commissioners that the original requests regarding the 39 programs totaled $2,280,109. The figure had to be reduced on the basis of available funding, he added.

Several years ago, he explained, the County Commission challenged him and his staff to improve their outreach to South County organizations.

Then Shirley pointed out that, to be eligible for a grant, an arts group has to achieve a score of at least 80% during the grants committee’s review of its application. This year, he continued, the scores ranged from 85% to 100%, which was why all the proposals submitted were recommended for funding.

Commissioner Nancy Detert made the motion to approve the grant awards, as recommended.

After it passed on a 5-0 vote, Shirley extended his appreciation to the board members on behalf of the arts community, noting “how much this support from you really means to them.” 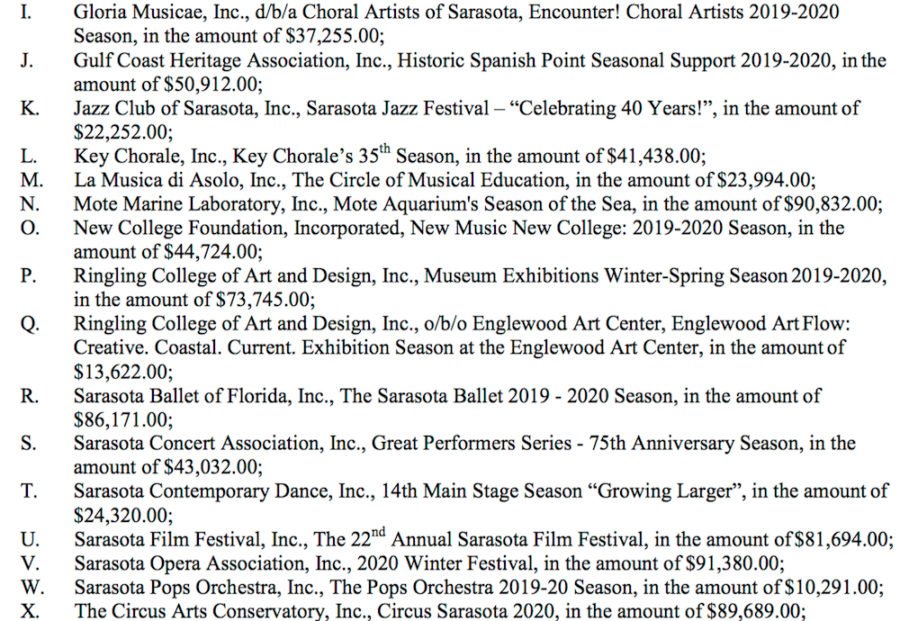 “We’ve been struggling with the state and the way it goes about its business [of supporting the arts],” Shirley added. “This money truly allows a lot of high-quality art production here … that we would not have without it.”