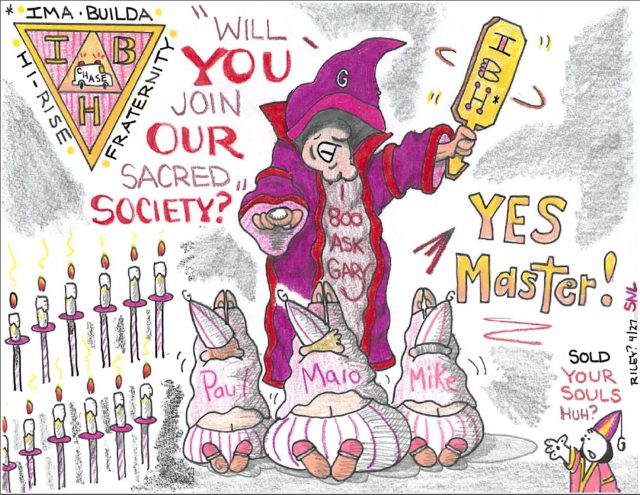 Our last weekly issue before our hiatus in August 2014, coincidentally contained an endorsement editorial for the Sarasota County Commission races that year. Since there was no (or only nominal) Democratic opposition, the winner of the Republican primary would become the de facto winner in November.

We endorsed Lourdes Ramirez over Al Maio, and Shannon Snyder over Paul Caragiulo. Our primary reason, although there were more, was the thinly veiled disdain both Maio and Caragiulo had for smart growth principles in general, and the county’s vaunted 2050 Plan in particular. We felt that these two men would favor the wants and desires of rich developers over the needs and welfare of the citizens of Sarasota County.

But what the past four years has shown us is, if Maio is not a tool of the developers, then he is the warmest, closest, bestest buddy a developer could ever hope for, with a burgeoning affection for almost every development proposal more akin to a child’s love of a pink, plush bunny.

His apparent mantra was job creation, and his preferred method for creating those jobs was approving the construction of houses, office buildings and shopping centers. If land was polluted, or some precious wetland was in the way, or birds or other wildlife might be imperiled by that development … well, nothing could be more important to Maio than helping developers. What’s a little environmental despoliation when happy developers could be building stuff?

In his first term in office, he joined a beatdown-in-progress on the county’s 2050 Plan, zealously throwing his weight around in that continuing melee. Then he ignored the counsel of county planning staff, who recommended against allowing Whole Foods to destroy a small, functioning wetlands area on University Parkway, offering a hearty green light to Whole Foods’ second area store. He next gave his blessing to Sarasota’s own potential “Love Canal,” voting to approve a Carlos Beruff development on a polluted former golf course. And who could forget his full-throated support of the plan of developer James Gabbert to build a construction materials recycling plant, which would include pulverizing concrete, adjacent to the world-renowned Celery Fields avian refuge? He rounded out this disregard for planning by voting to pretend the Urban Service Boundary did not exist in a spot where developer Lee Wetherington wanted to build an office building … as “Major League’s” Harry Doyle would put it, “Juuust a bit outside.”

His “concern” for the county economy was further exemplified by his refusal to balance the budget by considering even a tiny increase in the ad valorem tax rate in 2017, which would disproportionately affect rich people in multi-million-dollar waterfront mansions. His preference? A “public service tax” that would have added 5% to the cost of electricity, water and gas utilities for the many working families in Sarasota County. Better their economic struggle be magnified than rich homeowners having to cut back from a Maybach to a Bentley.

His latest love affair with a developer, joined by Commissioners Paul Caragiulo and Mike Moran, involves chiropractor and legal referral maestro Gary Kompothecras, of 1-800-ASK-GARY fame. Kompothecras — along with bankrolling TV shows — has been trying to build a hotel on land he owns on Old Stickney Point Road on Siesta Key. The problem is that he wants to be allowed to build a hotel only 2 feet from the street. Under county zoning rules, the hotel could go as high as 85 feet. No commercial structure over 35 feet can be 2 feet from a Siesta street. The obvious reason for that restriction can be seen when driving through downtown Sarasota, where a pliant City Commission and planning staff have turned the area into so many concrete canyons.

Siesta Key residents were outraged at the prospect of the Kompothecras plan, because such hulking structures right on the edge of a narrow street would destroy the quaint village atmosphere prized on the island almost as much as its iconic beaches. Those residents showed up in force at the public hearing on the proposal for a Siesta zoning amendment so they could voice their opposition.

Dozens of people spoke against the proposal — outnumbering supporters by more than three-to-one. Despite that and despite the fact that one concerned organization had offered a compromise that would concede some of what was being requested while protecting the unique quaintness of the island, Maio, Caragiulo and Moran voted to grant Kompothecras’ request, which was submitted through Kompothecras’ adjacent property owners on Old Stickney Point Road. And while the commissioners have not actually approved any high-rise hotels on the edge of the street yet, they have started Siesta Key down a slippery slope that could end with the island looking like downtown Sarasota.

In 2014, after 12 years of representation by Siesta Key resident Nora Patterson, islanders were not sure what to expect from new Commissioner Maio, who lives in South County. Now they know. While Lourdes Ramirez was soundly defeated in her primary contest with Maio in 2014, she is shaping up to be a more formidable opponent this year, with increased fundraising and greater support from her neighbors on Siesta Key. Even more interesting is a growing campaign from political newcomer Wesley Beggs, a recent graduate of New College and a local business owner.

For Siesta Key residents, and for Sarasotans countywide, there is an alternative to Al Maio’s cozy relationship with developers. There is an alternative to the wanton destruction of tourist attractions such as the Celery Fields (which, incidentally, create jobs). At long last, Maio can be held accountable for his disregard of the needs and welfare of the people of Sarasota County. As the August Republican primary approaches and the fall general election looms, we will have much more to say about how voters can right the wrong from four years ago.

LETTERS TO THE EDITOR: The Sarasota News Leader welcomes letters to the editor from its readers. Letters should be no more than 300 words in length and include the name, street address and phone number of the sender (although only the name and city of residence will be shown in the publication). Letters should be emailed to Letters@SarasotaNewsLeader.com, with “Letter to the Editor” in the subject line. Letters actually printed will be based on space available, subject matter and other factors. We reserve the right to edit any letters submitted for length, grammar, spelling, etc. All letters submitted become the property of The Sarasota News Leader.