Board also to consider lowering of age requirement for masks, with vote likely on July 20

As a result of public comments, the Sarasota City Commission on July 20 is expected to address two proposed tweaks to the mask ordinance it approved on June 29 — which has several exceptions — in an effort to try to prevent the spread of COVID-19.

During the board’s regular meeting on July 6, City Manager Tom Barwin reported that two issues had been raised over the previous week. First, on June 29, the majority of the city commissioners agreed to exempt children and youths under the age of 18 from wearing masks, with board members expressing the view that parents and guardians should have the right to decide the most appropriate age.

Second, Barwin said, city staff had been asked whether face shields “can be a good alternative to a mask.” However, he acknowledged, “We sort of had mixed reactions to that.”

He added that he has heard that a face shield “is likely a safe and very good alternative” to cloth coverings.

In regard to the age issue: Mayor Jen Ahearn-Koch said she believed that the ordinance the Town of Longboat Key implemented requires masks for anyone age 6 and older. “I thought that was an excellent suggestion [for the Sarasota regulations].”

People from Longboat do shop on St. Armands Circle, which is part of the city of Sarasota, she noted.

As for face shields: Ahearn-Koch told her colleagues that she had spoken with Dr. Manuel Gordillo, Sarasota Memorial Hospital’s chief epidemiologist. He recommended the use of shields, she said. Not only do they cover a person’s mouth and nose, she pointed out, but they also cover the wearer’s eyes.

Vice Mayor Shelli Freeland Eddie voiced her opposition to the potential lowering of the age restriction in the city ordinance. “I still believe that that should be at the direction of the parent …”

However, she was supportive of the inclusion of face shields as an alternative to cloth coverings.

Commissioner Liz Alpert concurred with Ahearn-Koch about both the age issue and the face shields. “I think that young people can be tremendous carriers of the virus. … I think 6 is probably as good a number as any.”
However, Commissioners Hagen Brody and Willie Shaw sided with Freeland Eddie on the age issue.

“The result of this that we really have to consider,” Brody stressed, is that enforcement is a facet of the ordinance. Lowering the age to 6, Brody continued, “essentially is giving probable cause” to a city Code Enforcement officer or a Sarasota Police Department officer to issue a citation to a child older than 6 without a face covering. “So it has real consequences out on the streets.”

Brody and Shaw did concur with the suggestion about the face shields amendment.

City Attorney Robert Fournier explained that it would take a supermajority vote — four commissioners in favor — to approve any amendments to the ordinance.

He also told the board members that other correspondence city staff had received since they approved the mask ordinance on June 29 pertained to the section about the wearing of masks outdoors. As he recalled, Fournier continued, a number of people objected to the requirement that even members of one household should wear masks if they are together and cannot ensure they will be able to maintain social distancing from others. Yet, he noted, “Because environments are dynamic,” people outside can move in and out of range, “with no warning,” of individuals not wearing masks.

In response to that concern, Commissioner Alpert pointed out, “I have my mask with me if I’m walking outside.” She puts it on, she said, if she approaches people whom she will pass on the sidewalk, for example.

If the commissioners did not keep the language they approved on June 29 regarding the wearing of masks outdoors, Alpert added, “Nobody’ll be wearing them outside.”

Alpert was the board member who proposed the requirement in the ordinance for wearing masks outdoors if one cannot be certain of maintaining social distancing. 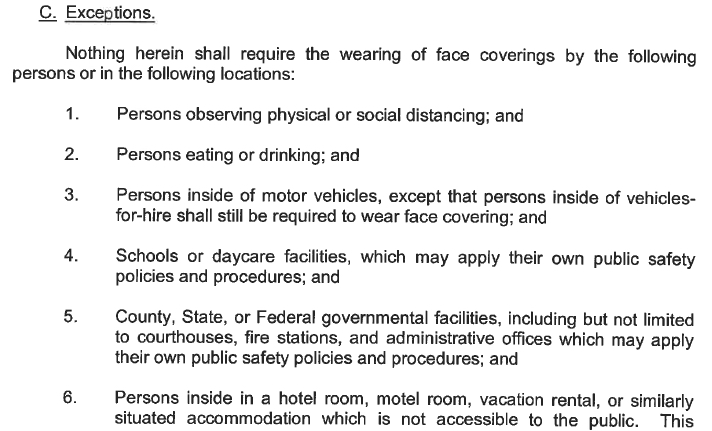 New cases and plans for enforcement

City Manager Barwin later prefaced his update about the latest COVID-19 statistics in the county and city by telling the commissioners that the feedback since they implemented the mask ordinance “has been very, very positive.”
In grocery stores he visited over the July Fourth holiday weekend, Barwin added, he saw 100% compliance.

In fact, he noted, city staff has been receiving calls and emails from members of the public saying they are coming into the city for business and pleasure purposes because they feel safer in the aftermath of the passage of the face-covering requirement.

Then, turning to the latest statistics about the novel coronavirus, Barwin reported that 4,490 new cases were recorded over the previous three days in Manatee County, with an average testing positivity rate of 10%, well above public health officials’ recommended threshold of 5%.

(The Sarasota News Leader determined that the positive testing average in Sarasota County from June 29 through July 5, based on Florida Department of Health Data, was 11%. Further, the county set a new record for the number of new cases reported in a single day: 247 on July 3, the state noted.)

Over the prior three days in Sarasota County, Barwin continued, 3,323 cases were recorded. “That’s more than whole countries have. We are far from out of the woods on this.”

Barwin next noted that anyone with questions about the city’s face-covering regulations could send an email to mandatory.masks@sarasotafl.gov. They automatically would receive a copy of the ordinance and a Frequently Asked Questions (FAQ) document about the various facets of the emergency law. Staff would add in information about the shields, based on the earlier discussion, he told the board.

“To date,” Barwin continued, “we’ve distributed over 20,000 free masks” via the city’s “Mask Mobile,” which was launched a couple of weeks ago, and through neighborhood associations. Further, masks were made available at City Hall, so members of the public could just drop by and pick them up. Businesses also had been getting masks to distribute, he said.

With a week having passed since approval of the ordinance, Barwin continued, city Code Enforcement staff will be enforcing the measures in it. “As time goes on, if we see flagrant violations,” he added, “we may have to write some citations.”

The fine is $50 in a case when a person elects not to contest a citation, the ordinance says. The fines can go as high as $500, the ordinance adds. A Code Enforcement Special Magistrate would decide on the final figure after a hearing, City Attorney Fournier explained to the commissioners on June 29 before their vote.