Material from stormwater project could save beach plan expenses

Stockpiling material excavated at the Siesta Key Public Beach park for the stormwater drainage project on-site could save the county about $250,000 and prove less disruptive for Siesta Key residents, the project manager told the Sarasota County Commission during its budget workshop on Aug. 20.

Excavation for the 1-acre stormwater retention pond would yield about 26,000 cubic yards of fill material, Carolyn Eastwood. “We need about 10,000 cubic yards for the park project.”

Without the use of any of that fill, Eastwood said, the county would have to plan on about 1,500 dump-truck loads coming onto the island.

That was why staff wanted to propose stockpiling fill material on a vacant lot where the park’s new tennis courts will be constructed, Eastwood said.

“So you want to locate, for several years, the stockpile right off  Beach Road?” Commissioner Nora Patterson asked.

“Certainly, it’s up to the board if that’s something they would want to consider,” Eastwood said.

The drainage project most recently has been held up by the U.S. Army Corps of Engineers over concerns about a wood-stork foraging area that would be disturbed by the project, Eastwood said.

Kimley-Horn and Associates, the county’s consultant on the project, has been trying to expedite the granting of the permits for the work, Eastwood added. The latest discussion between Kimley-Horn representatives and the Corps indicated the county could expect to receive a Notice of Intent to issue the permit in late October, Eastwood said.

It usually takes about 60 days to get the permit after such a notice is issued, she explained. Therefore, she said, if the county gets the permits by the end of the year, the project likely would not get under way until April or May.

The tentative timeline for the completion of the beach park improvements is 2024.

Commissioner Jon Thaxton pointed out that a private firm’s recent stockpiling of material in Palmer Ranch was “very, very, very problematic.” A county project that stockpiled material in Osprey also had proven “very, very problematic,” he said. “There’s no way that I can envision putting all this money into beautifying [the Siesta Beach Park],” he added, “then stockpiling a bunch of dirt right at the entrance … especially if it’s going to be there for several years.”

Eastwood told the board she felt she would have been negligent if she had not brought up the possibility.

“I chalked that up as a non-starter when you said it,” Patterson told her.

At the same time, Patterson said, “You can’t really postpone the drainage [project] anymore than you already have, because … the instigation for that is to try to eliminate beach closures, which are just absolutely disastrous for tourism in the area.”

The project is designed to ensure that cleaner stormwater is discharged through a pipeline constructed into the Gulf of Mexico.

Commissioner Joe Barbetta said, “I think we need to look at the cost benefit and the negative [factor] of trucks going up and down the highway. That’s really important. … That’s a lot of truck traffic. You’ll have neighbors complain about that a lot more [than the stockpiling], let alone the wear and tear on the roadway.”

Perhaps, he added, the fill material could be screened from the view of passersby on Beach Road.

Thaxton pointed out his concern was that the material not be in plain view of the road. “There may be opportunities to stockpile on the site, where it’s out of sight and out of mind. This is strictly an aesthetic concern,” he added.

“It would be just a very temporary stockpiling,” Patterson said, “if we were going to complete the [park improvements] project in just a year or so.”

Eastwood said staff would examine the site to determine whether the material could be set back from the road.

When Patterson asked for the most current cost estimates for both projects, Eastwood said the drainage project still was pegged at about $1.5 million. In September 2011, Eastwood continued, the estimate for the beach park improvements was $16.8 million. However, the most recent estimate, with the design 60% completed, had come in between $22 million and $23 million.

Staff members had asked the Kimley-Horn consultants to provide them with options to pare that cost to get it closer to $21.5 million — an estimate that includes all the design and permitting costs — Eastwood said, “just to make sure there’s nothing that’s platinum-plated here.”

Those options should be ready by next week, she added.

In response to a query from The Sarasota News Leader, Eastwood said she had no information at this point to indicate why the cost estimate had risen.

During the workshop, Barbetta asked Steve Botelho, the county’s chief financial planning officer, “Didn’t we come up with an opinion [that] if we bond this all at once, with bonding costs today and savings of construction [costs], it would be more beneficial to do [all the project] at once rather than stretch it out [to] 2024?”

Botelho replied that staff had run the numbers and determined the county could save money by pursuing that option. However, he reminded the board, “What complicated the funding was the discussion of the 800MHz funding.”

Botelho was referring to the commission learning later that the Sarasota County Fire Department and Sheriff’s Office’s emergency radio system needed to be replaced as soon as possible.

By the time the beach park design is complete, Botelho said, staff also should know the exact cost of a new radio system. The commission would be able to use all that information to decide how to proceed with the beach plans, he added.

“Nothing’s worse than seven or eight years of disruption on Siesta Key, our No. 1 tourist attraction,” Barbetta said, adding, “I want to make sure the public understands we haven’t given up on that option” of doing the project all at once.

With concerns having been raised in recent weeks that the county could lose up to $975,000 from the Southwest Florida Water Management District to help pay for the stormwater drainage project because of permitting delays, Eastwood said staff was planning to meet again with SWFWMD representatives on Aug. 23 “to see what we can get worked out.”

The money has been referred to as a grant, he also explained, but the funds actually would come to the county as a reimbursement of expenses, up to half the total cost of the project.

On Aug. 20, Eastwood told the County Commission that if the county lost the grant, once project construction was about to get under way, “we could go back to SWFWMD and ask for out-of-cycle grant funds … There’s different options.”

She added, “They do like this project. It is a water-quality project specifically, and [improving water quality] is one of their goals and objectives.”

Additionally, Eastwood explained, staff was exploring how to mitigate the destruction of mangroves in a ditch where new parking spaces are planned to be added to the beach park.

That was another permitting concern.

Originally, she said, staff had planned to use one of the county’s regional off-site mitigation areas. “However,” she said, “there are no available credits for mangroves.”

When Thaxton asked how large an area the mangroves covered in that ditch, she told him “about .25, .3 acres. … Mangroves were planted in [the ditch] as part of a Beach Road project years ago, as mitigation for that project.”

A county graphic illustration of the Siesta Public Beach stormwater drainage plan follows. The vacant lot immediately to the left of the yellow lines at the top of the map is the site proposed for stockpiling fill material. 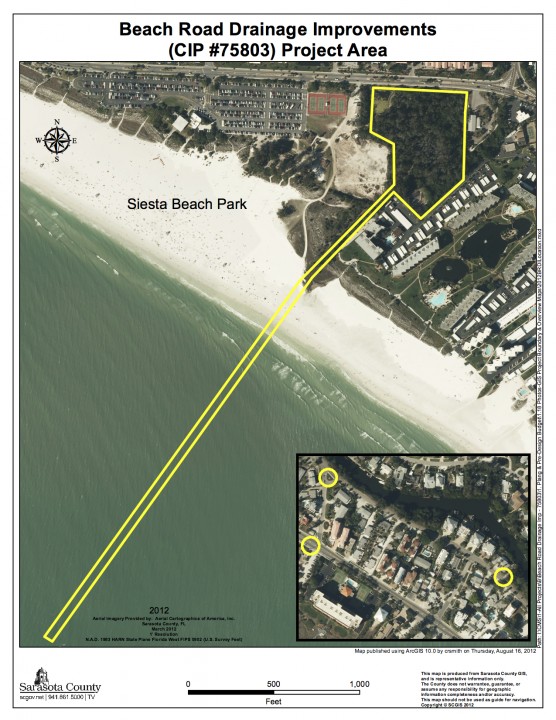