Speakers urge board members to retain current system of government

On March 7, the Sarasota City commissioners formally accepted the report of the Charter Review Committee, whose members they appointed last year to tackle a top-to-bottom review of the city Charter.

As City Auditor and Clerk Shayla Griggs noted, former City and County Commissioner Carolyn Mason, who chaired the committee, was present to present only a synopsis of the group’s recommendations. The City Commission has scheduled a special meeting on March 28 to review those and decide how to proceed with placing proposed Charter changes on the November General Election ballot.

That meeting is scheduled from 9 a.m. to 5 p.m. in the City Commission Chambers within City Hall in downtown Sarasota.

Before the March 7 vote on the report, Commissioner Liz Alpert did ask Griggs for assurance that a “Yes” would not indicate endorsement of the recommendations. Griggs offered that assurance. Therefore, on a motion by Commissioner Hagen Brody, seconded by Vice Mayor Kyle Battie, the board members voted unanimously to accept the report.

Commissioners Jen Ahearn-Koch and Brody also took the opportunity on March 7 to thank the members of the committee for their time and dedication to the task with which the commissioners had charged them. 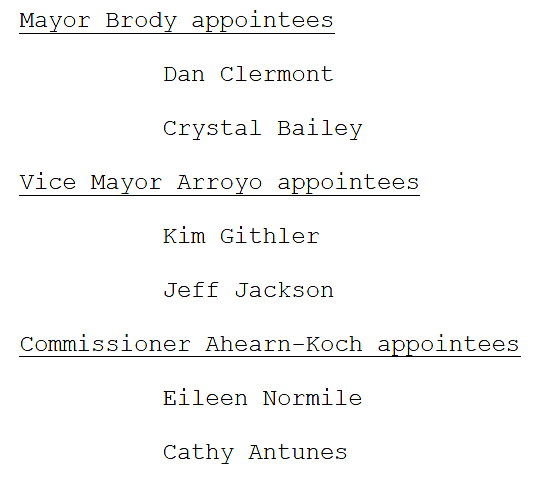 Chair Mason had noted that the committee conducted 15 meetings, one of which was scheduled just to accept public comments.

Four individuals did address the commissioners on March 7 about aspects of the committee’s work. Among them, former two-term Mayor Mollie Cardamone and two other city residents — Kelly Franklin and John Mercer — urged the board members to keep the system of government as is, including the Charter provision calling for the commissioners to elect one of themselves as mayor each year.

Mercer, a former mayor of Sunnyvale, Calif., served as deputy assistant secretary of the U.S. Department of Housing and Urban Development (HUD) under the late President Ronald Reagan, he told the Charter Review Committee members on Nov. 10, 2021. During his remarks that evening, he explained research he had directed be undertaken at HUD; the results showed that cities with the least distress were those with the council/manager form of government.

The majority of the Charter Review Committee members — as Mason noted in her March 7 remarks — had voted to recommend that the commission seek to amend the Charter, via referendum, so a mayor elected by the voters would serve four years. That mayor would have no veto power and no administrative powers or duties. However, the individual would have a vote on the commission, Mason added, and the person would be subject to the state’s open meetings and public records regulations — the “Sunshine Laws.”

During her remarks, Cardamone explained that, in 1985, she served on a committee that revised the Charter’s provisions for the election of commissioners. The work was necessary in the aftermath of a civil rights lawsuit, she pointed out.

As a result of that committee’s work, Cardamone said, the Charter was modified to call for three commissioners to be elected from district seats and two to be elected at-large, instead of electing all five on an at-large basis.

The revised system, she continued, has given every city resident a voice in selecting commissioners. The change also has made it possible for a Black person to be elected, Cardamone pointed out, “which has happened every four years since.”

“In general,” she told the board members, the version of the Charter on which she and her colleagues on that committee worked “has held up well.” Modifying the document to require the election of a mayor every four years, she added, “changes this elegant system of checks and balances and equal representation.”

Moreover, Cardamone said, it is possible that such a revision could jeopardize the prospect of any other Black citizen’s service as mayor.

She also noted that the few city residents who have pushed for an elected mayor “have yet to provide a compelling reason to take the risk of making such a drastic alteration.”

Cardamone concluded her remarks by urging the commissioners, “Please keep the form of government that has worked well since 1985.”

Clarifying the ‘Investigations’ section of the Charter

Another speaker, Cathy Antunes, was a member of the Charter Review Committee.

The issue of the elected mayor “certainly took most of the bandwidth of the committee,” Antunes told the commissioners.

One other issue, which the majority of the committee members did not end up endorsing, she continued, was a revision of the Charter to clarify how acts of malfeasance by the commissioners should be handled.

In July 2021, Antunes pointed out, commissioners considering how best to deal with allegations involving then-Mayor Hagen Brody’s abuse of staff talked about that lack of clarity in the Charter. In fact, Antunes said, both Commissioners Arroyo and Battie suggested that the Charter Review Committee members might be able to come up with some recommendations.

Antunes then noted that she had passed out to the commissioners a set of materials that City Attorney Robert Fournier had provided the Charter Review Committee members in regard to potential changes in the Charter to address malfeasance and related issues. Fournier “did a terrific job,” Antunes added. Including those changes in the Charter, she said, would clear up the confusion.

“There’s a range of responses,” she pointed out. “It’s not draconian.”

An allegation of a Sunshine violation

Before the Charter Review Committee discussion ended on March 7, Commissioner Brody said he understood that a written complaint had been filed about a Sunshine Laws violation. He had not seen it, he added, but he asked City Attorney Fournier whether the commissioners should discuss it.

“I’m not aware of any formal complaint,” Fournier replied.

The Sarasota News Leader also asked Fournier for a copy of that email; Fournier provided it to the publication.

“In the interest of transparency,” Clermont wrote, “I wanted to disclose some post meeting comments after last night’s meeting.

“Immediately following adjournment, Cathy Antunes approached me and stated, ‘Dan you know what you want, go for it. Make the motion and go for it.’ I was reluctant to respond and don’t recall if I did. Cathy Antunes followed up by stating roughly, ‘Whatever you do, study up on the Sunshine Law, its [sic] important.’ I responded, ‘I will.’

“I wanted to share these comments with you so you could determine if it needed to be included in the record,” Clermont added.

During that Nov. 9, 2021 meeting of the committee, the members spent about 90 minutes discussing the issue of citizens electing the mayor of Sarasota. Ultimately, Clermont made the motion that called for the group to recommend to the City Commission that the Charter be revised to allow for voters to elect a mayor every four years. Committee member Kim Githler seconded it, and it passed 6-3.