Each year, in preparation for throngs of visitors during the spring break period — including many teens and college students — the Sarasota County Sheriff’s Office launches an operation that focuses on an enhanced presence of law enforcement personnel at popular locations.

This year, especially with TripAdvisor having named Siesta Public Beach No. 2 on its Top 25 U.S. Beaches list, Siesta Key is one of the prime locations for extra patrols, Sheriff’s Office personnel have pointed out.

In a March 7 Facebook post, Kaitlyn R. Perez, community affairs director for the Sheriff’s Office, wrote, “Under the leadership of Sgt. Dan Smith, our Siesta Key substation is fully staffed and provides education and enforcement along the barrier island during our day shift. Supported by our Mounted Patrol Bureau,” she continued, “deputies on horseback are working along the beach and assisting with calls for service in the beach parking lot and other areas as needed.”

Then Perez noted, “At 3 p.m., our evening shift comes on to support the transition between dayshift and nightshift, which is when we strongly encourage citizens to be extra patient due to heavy traffic and congestion. At 6 p.m., nightshift deputies make their way to the Key, which is when things really get strategic.”

Then Perez reported that, over the first weekend of March, “from Friday night into Saturday morning alone, deputies arrested four people on the Key for drunk driving. This is an example of enforcement, not education, and it will continue so long as drunk drivers get behind the wheel.”
She added, “We are doing our part by briefing daily to analyze the deployment of personnel and resources. You can do your part by enjoying Siesta Key safely, respectfully, and responsibly. We will see you out there!”

With Smith having been transferred to the Emergency Operations Bureau, a new substation leader has been named. As it turns out, Perez told The Sarasota News Leader this week, that individual also is a Sgt. Smith — Sgt. Dan Smith.

His first official day on the Key was March 3, Perez added in a March 7 email.

He was promoted from deputy to sergeant in February 2021, she pointed out. Since then, Perez added, he has been assigned to the Patrol Bureau.

The formal Sheriff’s Office announcement about Dan Smith’s promotion noted that he served in the United States Marine Corps from 2002 to 2006. In 2009, he graduated from the Criminal Justice Academy at what was then the Sarasota County Technical Institute. Later the same year, he was hired by the Sheriff’s Office as a patrol deputy, the announcement continued.

In 2010, Smith joined the agency’s SWAT team, serving as a sniper for seven years, the announcement added.

Over the course of his career, he has been nominated four times for Law Enforcement Division Employee of the Month, that announcement noted.

In 2012, he assisted at the Republican National Convention in Tampa, and in 2019, he received the Life Saving Award, the announcement said.

Prior to being assigned to the Patrol Bureau, it noted, he was a member of the agency’s Tactical Unit.

Just how busy has it been on the Key?

In response to an inquiry this week about the size of crowds on Siesta Public Beach for the first week of March, Sara Nealeigh, Sarasota County’s media relations officer for the Emergency Services Department staff, explained in an email that the lifeguards on Siesta Public Beach do estimate the number of people in the area of the lifeguard stands.

She emphasized that the Lifeguard Division does not have any attendance tracking software, so the figures are estimates only.

For the first week of March, a representative of the Lifeguard Division said, via Nealeigh, lifeguards had come up with an approximate count of 76,100 people.

The News Leader also asked Perez of the Sheriff’s Office about calls for service that the agency had received on the Key from March 1-7, in comparison to the statistics for the same days in 2021.

However, Perez stressed, “Please also keep in mind the obvious — which is that we can’t confirm these calls have any correlation to spring break or our influx of visitors.”

For example, she explained, the animal services calls may have been related to dogs on the beach that were brought there by spring break visitors, or they may have resulted form an animal issue in a neighborhood that involved two long-term residents.

A county ordinance bans dogs on the public beaches. That regulation is an effort to protect shore-nesting birds that return to the county each season, and it is a safety measure for visitors. As Sheriff’s Office personnel have pointed out during Siesta Key Association meetings, some dogs will bite — and some people fear dogs in general. 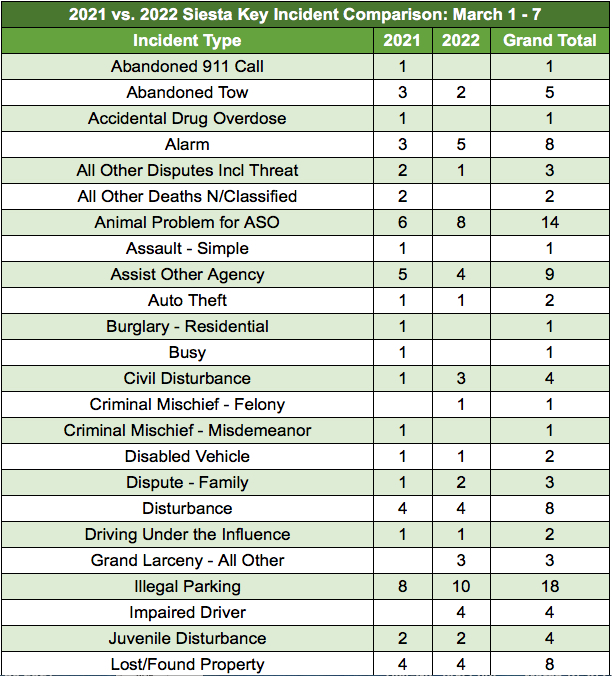