Although the City of Sarasota extended its declaration of a local citywide public health emergency through May 29, in response to the COVID-19 pandemic, the May 22 order issued by City Manager Tom Barwin allows certain city advisory boards to resume meeting, the city announced.

Other board meetings have been scheduled as follows:

Meeting times, locations and agendas are being posted to the city’s website as they become available, the release pointed out. Additional details may be found in the May 22 emergency order, as well.

Additionally, the Planning Board will hold a workshop on June 10 to hear a presentation about the Sarasota in Motion citywide transportation master plan, the release noted.

“The status of future Planning Board meetings will be addressed in a subsequent emergency order by the City,” the release said.

Further, the city’s Development Review Committee (DRC) will meet on June 17 and June 24. The DRC, which includes representatives from various city departments, provides guidance to applicants for land-development projects.

Moreover, in June, the city will accept re-submittals of a group of applications that previously were reviewed by the DRC but which did not receive the committee’s sign-off; those are listed here, the release says. 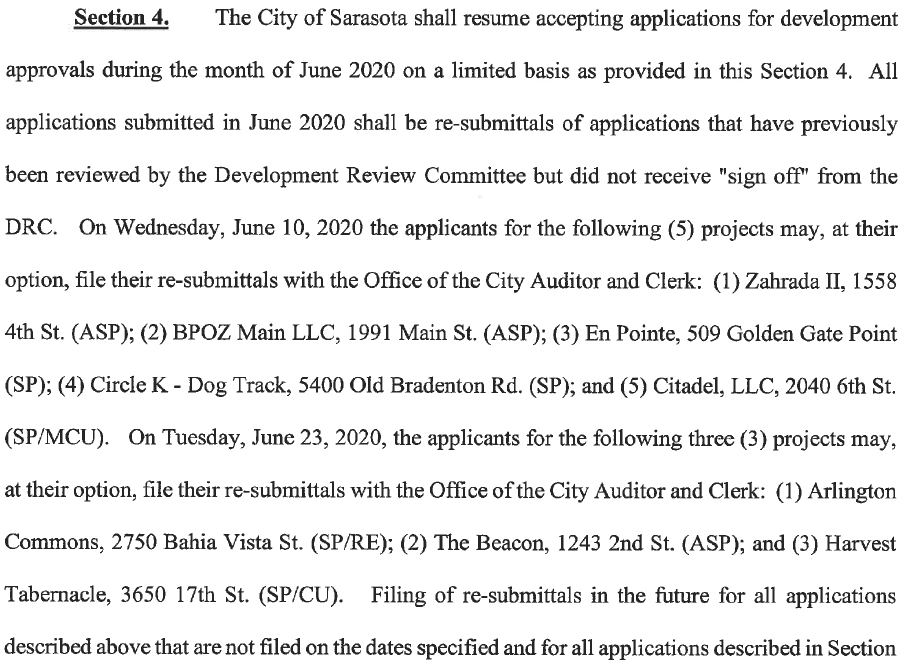 “The filing of new applications is expected to resume in July and will be addressed in a future emergency order,” the release adds.