Sarasota County Commission Chair Michael Moran this week proposed strengthening the penalty for any candidate for county office who violates the Sarasota County Charter provision that no campaign finance contribution can exceed $200.

If people purposely are offering guidance that candidates can take more than that amount, Moran said, then he suggested the board make the penalty “as punitive as possible.”

His proposal came after the commissioners asked County Attorney Frederick “Rick” Elbrecht for an update on an investigation into alleged illegal contributions in the three races for the commission seats that will be on the Nov. 3 General Election ballot.

On Sept. 29, Jack Brill, acting chair of the Republican Party of Sarasota County, sent a letter to Moran and Elbrecht, contending that all three Democratic candidates for the commission seats this year “have accepted a large number of donations beyond the $200 limit set in the Charter.”

Brill referenced Section 6.5A of the Charter, which says, “No candidate for any county office for which compensation is paid shall accept any contribution from any contributor, including any political committee, as defined by state law, in cash or in kind, in an amount in excess of $200.”

The corresponding county ordinance, Brill pointed out — Chapter 46 of the County Code — says each violation “shall be treated as a misdemeanor and the violation shall, upon conviction, be punished by a fine not to exceed $500.00 or by imprisonment in the county jail not to exceed 60 days or by both such fine and imprisonment. Each act constituting a violation shall be deemed a separate offense.”

Commissioner Alan Maio raised the issue of Brill’s letter during the board’s regular meeting on Oct. 6.

Elbrecht told the commissioners that he had forwarded Brill’s letter to the Sarasota County Sheriff’s Office “for an investigation.” If the Sheriff’s Office determines that charges are warranted, he added, then it will turn over its findings to the State Attorney’s Office for the 12th Judicial District.

On Oct. 5, Douglas Johnson, creative communications specialist with the Sheriff’s Office, told The Sarasota News Leader in an email, “We have received the information and it is being reviewed at this time. I was told it was assigned to a detective this morning, so there is no report as of yet.” 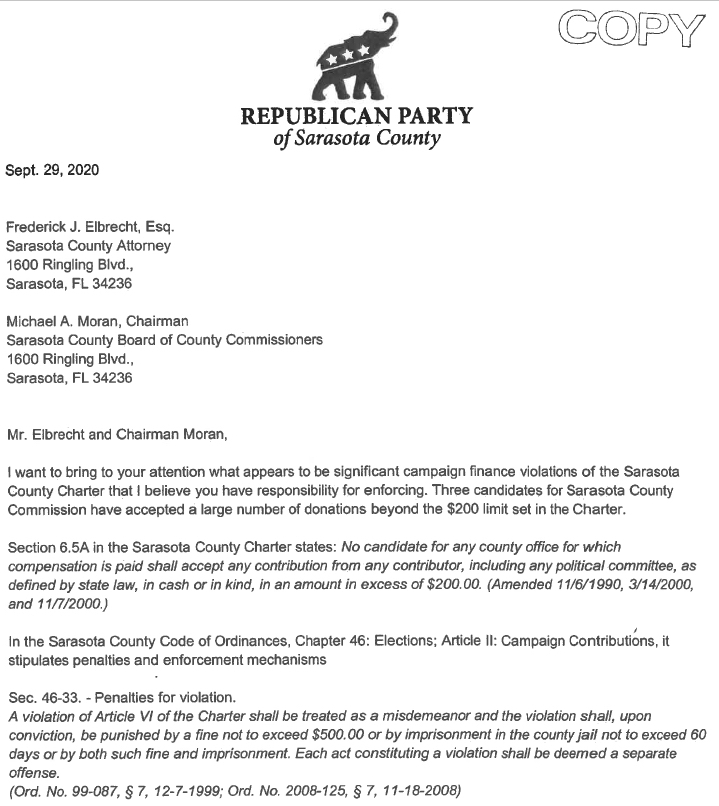 “I’ve said this before,” Moran told his colleagues during the Oct. 6 discussion: “I just found the whole thing outrageous. These folks didn’t bother to read the rules of the Charter … [or] read it and didn’t understand it, or they chose to flat out ignore it and tried to use it as a loophole, and frankly I find all of it completely unacceptable.”

He added, “Up until now, every single candidate has followed [the Charter] rules, until this.”

When contacted by the News Leader on Oct. 5, Joanne DeVries, chair of the Sarasota County Democratic Party, issued the following statement: “The State law, 106.08(2)(a), [Florida Statutes], clearly allows political parties to donate to candidates in excess of limits set to individuals. Any contributions made over the local ordinance limit was done so in error and without intent and will be refunded.”

She added in the statement, “In 34 days, the era of one party county government will come to an end and the local Democratic party welcomes the Republican party in working together to get money out of politics.

Mark Pienkos, the Democratic candidate facing Moran in the District 1 race, also responded to a News Leader request for comment. He referenced the same section of the Florida Statutes that DeVries had noted.

Then Pienkos wrote in his email, “During the next 33 days, our campaign is focused on local issues critical to our community. Our campaign is hearing loud and clear voters’ concerns regarding the following issues: Protecting our environment; Making sure overbuilding does not ruin our beautiful open spaces; Being a watchdog on their precious tax dollars: Calling out gerrymandering; and Listening to all of the people in District 1, not just special interests.”

He attached three examples. One of the mailers, from Florida Country, had as its return address Venice office of the Robinson Gruters & Roberts CPA firm in Venice, which has been handling campaign accounting for Republican candidates — including Moran — in races this year. The Robinson in that firm is Eric Robinson, a former chair of the Republican Party of Sarasota County.

As of Oct. 2, records show, Florida Country had $155,300 in contributions since March from a wide variety of developers in Sarasota and Manatee counties. Among contributors to that PAC in recent months, as listed in its records, have been Benderson Development Co.; John Cannon Homes; Mattamy Homes, which is developing the West Villages in North Port; Taylor Morrison Inc., which is developer Carlos Beruff’s company; attorney William Saba of Sarasota; former Republican state Rep. Michael Grant of Port Charlotte; Schroeder Manatee Ranch, developer of Lakewood Ranch; James Gabbert, a developer who sought board approval in 2017 to construct a yard waste and construction materials recycling facility next to the Celery Fields; Physicians Group LLC, which is controlled by Siesta Key chiropractor Gary Kompothecras, who is known for his 1-800-ASK-GARY medical and legal referral service; and Frederick Derr & Co. in Osprey.

Benderson Development alone has given that PAC $56,000 since June 3, Florida Division of Elections records show.

Another contributor to mailers for Moran has been Gulf Coast Conservatives, which has a Tallahassee address. From June 29 through Aug. 11, that PAC listed contributions of $402,291, state records show. U.S. Rep. Matt Gaetz is associated with that political action committee, the documents show.

Alice White of North Port, the Democratic candidate for the District 5 seat being vacated by Commissioner Charles Hines, told the News Leader during an Oct. 6 telephone interview that she, too, was following the guidance of state and county Democratic Party leaders who believed the Florida Statute governed the county contributions.

“I did question them,” she said. “Being a newcomer to politics,” White added, “I yielded to their answer. … They’ve been involved in politics way longer than me.”

Her next campaign finance report, due Oct. 9, would show she had refunded the money above the $200 threshold, she said.

In fact, White continued, she was familiar with the County Charter limit because several earlier contributors had given her more than $200 on separate occasions, and she had refunded their money as soon as she learned about the situations.

Her own son, White added, gave her $500 at the outset of her campaign. She advised him that she would have to refund the money, she said. “I even told him, ‘Please cash the check,’” so no question would arise.

He did not give her another contribution until Oct. 6, she added with a laugh, noting that it was her birthday.

“This was clearly just a misinterpretation of the state statutes,” White said. “It’s just not plausible,” she added, to think that she was trying to skirt the law, given the transparency of the campaign finance records she has filed with the Sarasota County Supervisor of Elections Office.

Cory Hutchinson of North Port, the Democratic candidate vying against Commissioner Nancy Detert for the District 3 seat, told the News Leader during an Oct. 6 telephone interview that he had not seen Brill’s complaint. Like Pienkos and White, Hutchinson said, “We believed that we followed the letter of the law.”

As soon as he learned of the allegations, Hutchinson added, he wrote a check that refunded the money he had accepted over the $200 limit, and he put the check in the mail on Oct. 2. “As far as I’m concerned,” he said, “that’s it. … I’ve been open and transparent with all my funds.”

As for the commissioners offering comments this week, Hutchinson told the News Leader that, given the fact that County Attorney Elbrecht was following the appropriate process for dealing with Brill’s complaint, “There’s no need for anybody else to get involved.”

During the Oct. 6 board discussion, Commissioner Detert asked County Attorney Elbrecht, “Wouldn’t it have been more appropriate … since it’s an election violation, wouldn’t the Supervisor of Elections have a way to handle [illegal contributions,” including forwarding documentation to the Florida Secretary of State’s Office?

Since the violations involve the County Charter, Elbrecht replied, that was why he forwarded Brill’s complaint to the Sheriff’s Office.

“‘Cause ignorance should be no excuse,” Detert continued. “The supervisor of elections gives you a candidate handbook,” she added, “and it tells you what our Charter said.”

The first time she ran for office in the county — for a School Board seat — Detert pointed out that she read the handbook “cover to cover,” to ensure she would not violate any regulations, “and it’s stuck with me.”

After he received Elbrecht’s notification about the Brill letter, Commissioner Christian Ziegler said, he began receiving emails and calls from the news media around the state. (He is vice chair of the Republican Party of Florida.)

Ziegler then talked about the Florida Democratic Party having given Pienkos, the District 1 Democratic candidate, $6,000 “in a county that has $200 limits.”

Ziegler also asked Elbrecht how many Charter counties in the state have higher individual contribution limits than the one in Sarasota County.

Elbrecht told Ziegler he did not have answers to the questions, but, at board direction, his staff could undertake the necessary research to answer them.

The commissioners did not provide such direction.

Then, when Ziegler asked how the commissioners could raise the legal amount from $200 to $1,000, for example, Elbrecht explained that a referendum would be necessary.

“If someone has a desire to make a change,” Ziegler said, “they could ask us or they could even initiate it themselves.”